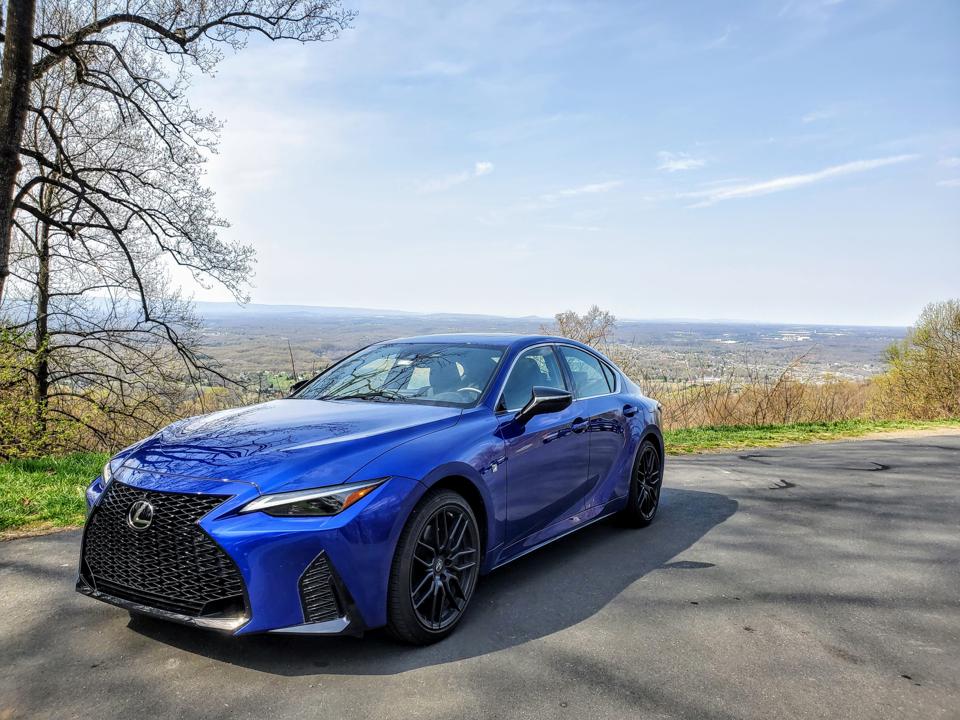 The Lexus IS sports sedan rivals the BMW 3 Series, Cadillac CT4, Mercedes-Benz C-Class and other entry-level luxury sedans. In the age of the crossover, the release of a new sports sedan becomes quite a special occasion. In fall 2020, Lexus announced an updated version of its IS350 F Sport sedan, and we tested it to see if it drives as well as it looks.

The engine has a powerful sound for a naturally aspirated V6 in the upper rev range. Even better than just sounding good, it will do 0-60mph in 5.6 seconds and has a top speed of 143mph. The F Sport badge also gives you a drive mode selector and adaptive variable suspension, which helps you ride smoothly in all conditions. This 0 to 60 time is in line with entry-level offerings from BMW, Audi and Mercedes-Benz. However, we have to keep in mind that the IS350 F Sport is the most powerful vehicle currently available in the IS lineup.

There is no escaping the fact that the new IS350 F Sport looks like the part. It is covered in bold and awe-inspiring lines that frame an athletic silhouette and a stunning synergy of angular edges and elegant curves. By opting for the F Sport package, you get some nice additions to the exterior aesthetics, like a carbon fiber rear spoiler and blackened 19-inch alloy wheels.

Up front, the enlarged Lexus grille also creates a powerful presence that seems to eclipse the BMW kidneys. It’s not just the grille, either. The front and rear lighting of the IS350 F Sport is really bright. Up front, you’ll find incredibly stylish LED daytime running lights in a more compact and subtle package. At the rear, they installed an LED tail light bar that spans the entire width of the car. In almost every way in terms of exterior appearance, this Lexus seems to outperform its closest opponents.

Ultimately, however, is the IS350 F Sport’s pleasing exterior appearance, along with its positive performance characteristics, enough to set this sporty sedan apart from the competition?

Where the car does not impress:

While the IS350 F Sport clearly has many attractive qualities, there are aspects that disappointed fans who hoped for more. First of all, while its acceleration and speed may seem nice on their own, they don’t compare well to competitors in the same segment, despite the fact that this Lexus does well in terms of overall horsepower.

In addition, the all-wheel drive’s 6-speed transmission can only be called “lackadaisique” in its performance. That doesn’t speak at all of the seemingly sporty and athletic build of the surrounding sedan.

Finally, we can not help but feel a little overwhelmed by the interior of this Lexus. This is not entirely bad news. The F Sport receives nice touches such as very comfortable seats up front, a 10.3 inch infotainment screen, dashboard details in glossy black and brushed metal, a digital dashboard display with “movable” speedometer and an ash wood steering wheel surface finish.

These small points are positive, but overall it lacks the quality and finesse of its rivals, especially its German rivals BMW and Mercedes-Benz in terms of materials. In addition, the space in the back seat is very tight, especially for anyone 5 feet 10 inches or more. The free space is limited and the door space itself is rather “compact”, which makes entry rather a problem.

The infotainment system also looks dated and lacks user-friendly intuitiveness. Fortunately, they have integrated a touchscreen and Android Auto.

The verdict: a solid sports sedan, but one that does not fully deliver on its promises

There is no doubt that this Lexus IS350 F Sport is a solid sedan. The problem is the car’s inability to live up to its true potential, or the specifications of many of its rivals. What’s a little disappointing is that in a sea of ​​crossovers, Lexus has had the opportunity to turn this IS350 F Sport into a true “gait” model to help bolster its brand profile against BMW and Mercedes. They did not achieve this goal.

Having said that, it definitely looks of the room and has a few cool features. The build quality of the engine is undeniable, and there is no doubt in our mind that it will serve its owners reliably for many years to come. The starting price for the F Sport version of the IS350 is $ 43,925, plus $ 2,000 for the AWD option.

Is investing in a fixed bank deposit an attractive option? Find

Is investing in a fixed bank deposit an attractive option? Find