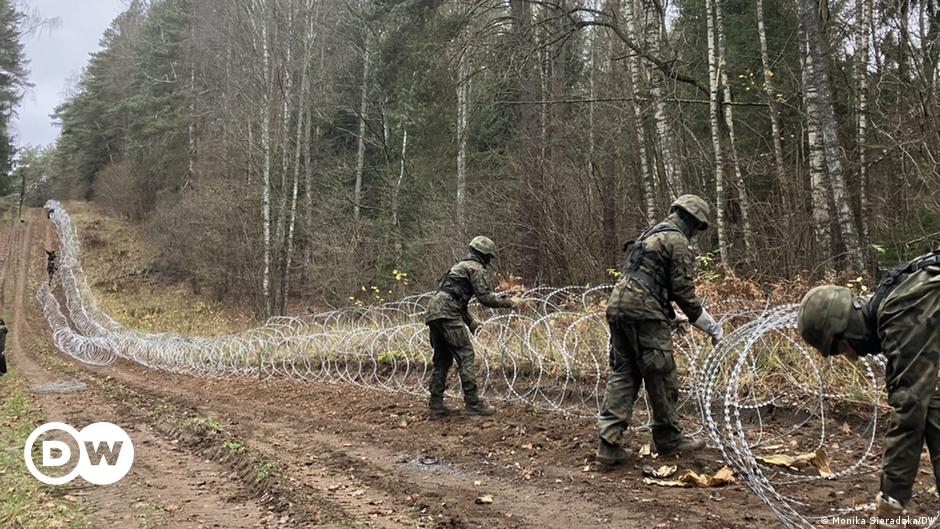 Krzysztof Zajaczkowski’s farm is located just 400 meters from the border between Poland and Russia. From the window of his house, the mayor of the village of Wilkajcie can see the letters of a yellow sign that says “National Border” in Polish.

The spruce forest behind the sign is on the territory of the Russian exclave of Kaliningrad. Until the end of November 2022, it is still possible to walk across the grass to the actual border. After that, the route on the Polish side of the border is blocked by a barbed wire fence.

Work on the fence has already started a few kilometers further east. “This is good and necessary when you live so close to Russia,” Zajaczkowski told TSTIME.

He said he did not feel at risk without the fence because the area was closely guarded by Polish border guards, but was quick to add: “But if you look at what is happening in Ukraine today, you never know what can happen from the Russian side. come.”

“We want to make this border watertight,” explained Polish Defense Minister Mariusz Blaszczak when he announced the construction of a new border fence on November 2, 2022. The decision, he said, had to do with “the flights between the Middle East and Kaliningrad.” According to media reports, the airport in the Russian enclave has signed contracts with Syria, Belarus and Turkey.

In 2021, thousands of people flew to Minsk, the capital of neighboring Belarus, to travel to the Polish border and enter the EU. There were violent clashes between migrants and members of the Polish security forces.

Poland then erected a barbed wire fence along the eastern border with Belarus. The Polish Border Guard says the number of attempts to cross the border illegally has since fallen from 17,000 in October 2021 to just under 1,500 in October this year.

Now it is planned to protect the region bordering Kaliningrad on the northern border of the country with a similar fence. The first five kilometers were completed in mid-November.

When completed, the barrier will be over 200 kilometers long, three meters wide and 2.5 meters high. For starters, it will simply be made of barbed wire. Cameras, tripwires and subsurface seismic sensors will be installed later.

To date, not many people have crossed the border illegally from Kaliningrad: the Polish Border Guard registered only 11 cases between January and the end of September. Most of those involved were tobacco smugglers, not migrants. Yet surveys show that two-thirds of Poles are in favor of the new border fence.

Fear of a Russian attack

“Migrants are not our main concern,” explains Urszula, who lives in the town of Goldap (population 14,000), just four kilometers from the border. “At least, we haven’t seen them here yet. But the greater the protection against Russia, the better. Putin is a bandit,” she said.

Another young man, who also spoke to TSTIME, shared this sentiment, saying, “One day Russia will also attack Poland.”

Urszula has absolutely no doubt that Poland needs the border fence. She even considers leaving the country. “After 30 years in the US, I came back to Poland when I reached retirement age,” she said. “But now I feel so unsafe here that I’m thinking about going back to America.”

Criticism of the border fence

But not everyone shares this opinion. “I don’t know if the barbed wire will stop refugees or if it wouldn’t be better for Poland to finally have a decent migration policy,” said Zbigniew Sodol, who runs an oxygen therapy center in Goldap. “When Russia fires its missiles, they fly a distance of 500 kilometers directly above our heads,” he told TSTIME. “There’s no fence that can stop that.”

Sodol went on to say that what Putin did in Ukraine was “cruel”, but that there were also “normal people” in Russia. He also pointed out that the people of Poland and Kaliningrad had benefited from the regular border traffic that existed until 2015.

The Polish opposition has also expressed criticism. Human rights activist and MEP Janina Ochojska of the Civic Platform (PO) took to Twitter to berate the Polish Prime Minister and government: “Have you lost your mind?” she tweeted. “You spent €350 million ($363 million) on a ‘wall’ on the Polish-Belarusian border, just to have loopholes for further lawbreaking and backlash, and now you want to build another one? Follow the laws and procedures It is cheaper and more effective.”

Protection of the external border of the EU

But such critical voices are rare in Poland. In the field of security, there is hardly any difference between the positions of the government and the opposition.

This comes as no surprise, says Paulina Piasecka, director of the Terrorism Studies Center at Collegium Civitas in Warsaw. “If we respond to a threat from the state that started the conflict with Ukraine just across our border, no resistance is to be expected.”

She pointed out that Poland is also responsible for protecting part of the EU’s external border. “The investment in security at the border with Kaliningrad is not only for the citizens of Poland, but also for those in all other countries that are part of the Schengen area,” Piasecka told TSTIME, adding that the border fence also enhances the sense of security strengthens. security felt by the people living in the region.

Get ready for what’s to come

Krzysztof Zajaczkowski said he and his family would feel safer if they could finally see the barbed wire fence from their window. However, he believes that people should not sit back and wait for the state to act. Like many families in Poland right now, the Zajaczkowskis have started stocking up on provisions and preparing shelter.

“We have a large cellar under the barn, where we could hide for a while in case of danger,” says Zajaczkowski’s 73-year-old mother Krystyna, who already stores potatoes, honey and eggs from the farm there. “Whether there are masses of migrants or a Russian attack, I will not leave my house.”

This article has been translated from German.

Bigg Boss 16: Ankit Gupta reminds me of Christian Gray from...

EU ministers are considering whether Hungary should be punished for rule...