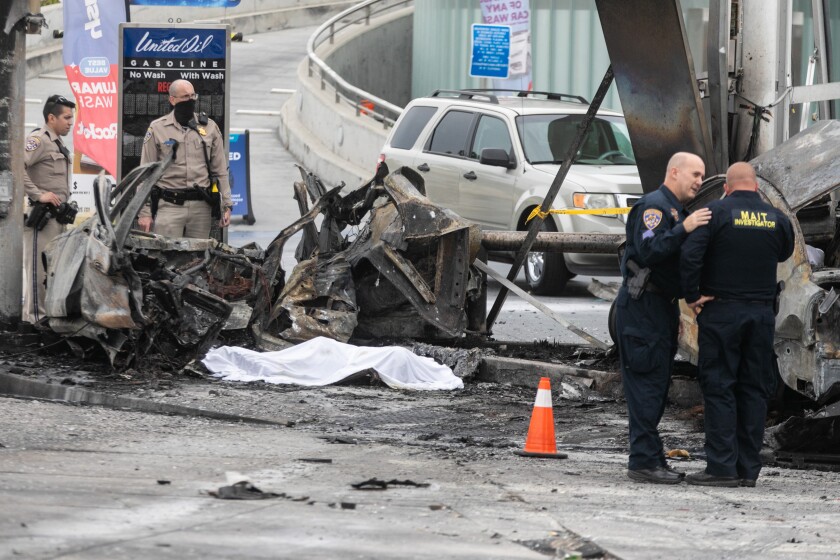 A moving car, a sickening crackle, a fireball. Before anyone had time to react, a multi-vehicle accident turned a busy intersection into one of the most horrifying scenes on the Los Angeles streets in recent years, killing five people, including a pregnant woman, and family members searching for answers.

Linton was at the wheel of a dark-colored Mercedes-Benz traveling at 100 mph on La Brea Avenue when he ran a red light at 1:35 p.m. Thursday at the Slauson Avenue intersection, hitting several vehicles. the California Highway Patrol.

The crash left the family of 23-year-old Asherey Ryan, the pregnant woman who was killed, in disbelief.

As she left their South Los Angeles apartment for a doctor’s appointment, Ryan Davis, 20, a hair styler, told her she wanted her hair done.

“She wanted braids too, probably just like this one,” Davis said, running her hands down her long black and blond braids that reached her waist.

But Thursday morning was the last time Davis would see her sister alive.

Within minutes of leaving the apartment, Ryan’s car was destroyed by Linton’s Mercedes. Ryan, who was 8½ months pregnant, was in the car with her boyfriend and 1-year-old son.

The fiery crash killed five people, along with Ryan’s unborn child, while onlookers and family struggled to understand exactly what was happening.

Davis and her family started to worry after they hadn’t heard from Ryan for hours.

Speaking to The Times from the doorway of the apartment where the sisters lived with their mother, Davis recalled her family’s desperate attempts to reach Ryan on Thursday.

Calls went straight to voicemail. Green text messages were sent to her iPhone, a sign that Ryan’s phone was dead.

It made no sense, Davis said. Her sister always had a charger in the car.

She thought the worst and wondered if her sister was involved in the fatal accident, her phone broken in the collision.

The heartbreaking confirmation came in a text message from a friend at the crash site. He took a photo of someone he thought was Ryan and sent it to Davis.

“When you spend that much time with someone, you will know every part of them,” she said.

Davis and her family collapsed. Their screams caught the attention of their neighbor, Josephine Harris, who drove up.

Some details emerged the day after the crash.

Surveillance video shows a Mercedes-Benz speeding through La Brea as dozens of cars cross over Slauson. The Mercedes doesn’t seem to slow down before going through a red light and crashing into cars at the intersection. It then bursts into flames and thunders into a light pole, where it comes to rest.

After the crash, a streak of fire burned on the ground and the cloud of smoke could be seen from miles away.

The cause of the crash was not immediately known, but Officer Franco Pepi, a spokesman for the California Highway Patrol, told The Times on Thursday that investigators determined the Mercedes was traveling “at high speed” and ran a red light.

At least six vehicles were involved in the accident, Pepi said. Eight people were injured.

According to two law enforcement sources, authorities are checking Linton’s blood tests to determine if she was intoxicated at the time of the crash.

A member of her family declined to speak to a Times reporter on Friday.

Linton was arrested on suspicion of vehicular manslaughter, and prosecutors expect to press charges Monday, charging her with the deaths of both the unborn child and the five others.

CHP investigators estimate her Mercedes was traveling at 80 mph to 100 mph as it approached the intersection and ran a red light, and the evidence gathered so far shows no signs of braking, according to two law enforcement sources.

According to CHP data, at least nine serious accidents occurred along that stretch of La Brea Avenue between 2013 and 2021. None have been fatal.

The LA County coroner has not released the names of those killed in the crash, other than Ryan’s.

Davis said Ryan and their other sibling, Sha’seana Kerr, were born in Los Angeles and raised in Inglewood.

In recent years, the family moved to California City, where their grandmother lives, before returning to LA

As the oldest sibling, Ryan, who went by Rey Rey, was the backbone of the family. Her birthday would have been in September; Davis followed in November.

Still, Ryan put aside talking about her own party and told Davis, “Hey, sister, I already know what I’m going to get for your birthday.”

Ryan always bragged about her sisters and their achievements, Davis said. She beamed with pride when she learned that Davis had gone to college for her criminal justice degree.

Ryan followed her younger sister and took part in the program, but it was Davis’ graduation that she looked forward to.

“I can’t imagine not having her at my graduation,” Davis said before bursting into tears.

Harris, the neighbor, also sensed Ryan’s sudden absence. After Harris moved to LA from Arkansas two years ago, it was Ryan who immediately became friends with her.

Their front doors were separated by a few feet, and the two would often meet in the apartment hallway, discussing boyfriend drama, the struggles of pregnancy, and grief from the past.

Harris had lost her mother in 2019 and her brother before that in a house fire. In a recent conversation, Ryan knocked on Harris’ door, sniffed and asked if she was cooking her famous fried chicken.

“I was like, ‘Girl, I got you — I fed the first baby so I could feed the second,'” Harris said, referring to Ryan’s toddler and the baby still on the way.

“I wake up, I expect her to come out the door,” she said.

But Harris has been unable to eat or sleep since he heard the screams next door and learned that her friend was dead.

“When I walk out the door, that’s the first thing I see: Rey Rey,” she said. “And it’s not there anymore.”