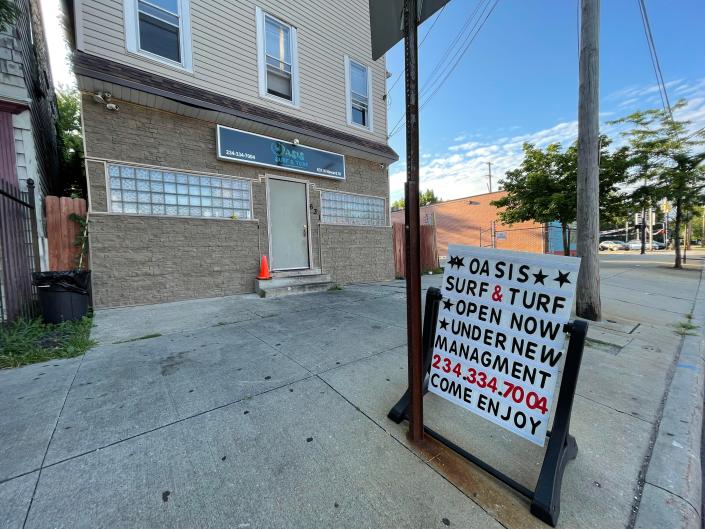 Akron Police Department has released body-worn CCTV footage showing a cop shooting a woman suspected of fatally shooting a woman on July 29 at the Oasis Surf and Turf bar in the city’s North Hill neighborhood. .

The images released Thursday from four body-worn cameras show different perspectives of the incident, including one in which the officer shot the woman as she raised her right hand and stepped toward the officer. A still clip from the video shows a gun on the floor next to the woman.

The real-time video then plays in slow motion and shows the woman, who police have not identified, raising her right arm toward the officer. The woman survived the shooting. She remained in hospital in stable condition on Friday with injuries not considered life-threatening. The charges are pending, Akron police said Friday.

The released images do not show the woman lying on the ground after she was shot or what happened next. The police story says officers immediately began using first aid and applied a tourniquet until emergency medical services arrived.

The videos show officers using flashlights, rifles at the ready, as they ran through backyards in search of the woman, then running down a sidewalk when she was spotted in the parking lot of the former Liberty Harley-Davidson motorcycle. dealer. Police cruiser sirens sound in the background.

Akron released the videos as required under a new city ordinance that requires the public release of body camera images of officers using deadly force within seven days. This is the fourth video released since December and the first since the fatal shooting of Jayland Walker on June 27 by eight Akron agents.

Akron Police Reforms:Where does the city stand in implementing recommendations

The first of four video clips shows the cop firing the shots and yelling “Show me your hands!” to the woman as she stood in a parking lot on Cuyahoga Falls Avenue.

The woman steps forward and raises her right arm. Then the officer fires four times.

The videos show other officers, including a cruiser, arriving in the parking lot when the officer fired at the woman.

An officer yells, “Show me your hands!”

Another officer is heard saying, “No!”

“Keep checking! Go!” says the cop, then runs up the sidewalk to the parking lot before the woman was shot.

What happened at the Oasis Bar?

Just before 3 a.m. on July 29, police responded to a report of a shooting at the bar at 830 N. Howard St. Police said a witness at the bar followed the suspect in the shooting and turned over to police officers, who said they saw that the woman had a gun and ran after her as she fled north toward Cuyahoga Falls Avenue.

Around the same time, police were informed that the woman shot in the bar, Chyna Shepard, 21, of Akron, was being taken to a hospital. She died July 30.

The gunman, who police have not yet identified, was taken to Summa Akron City Hospital.

The officer involved in the shooting, a two-year police veteran, was given administrative leave. The Ohio Bureau of Criminal Investigation is investigating the shooting in which the officer was involved. A separate investigation will be conducted by the Police Professional Standards and Accountability Bureau.