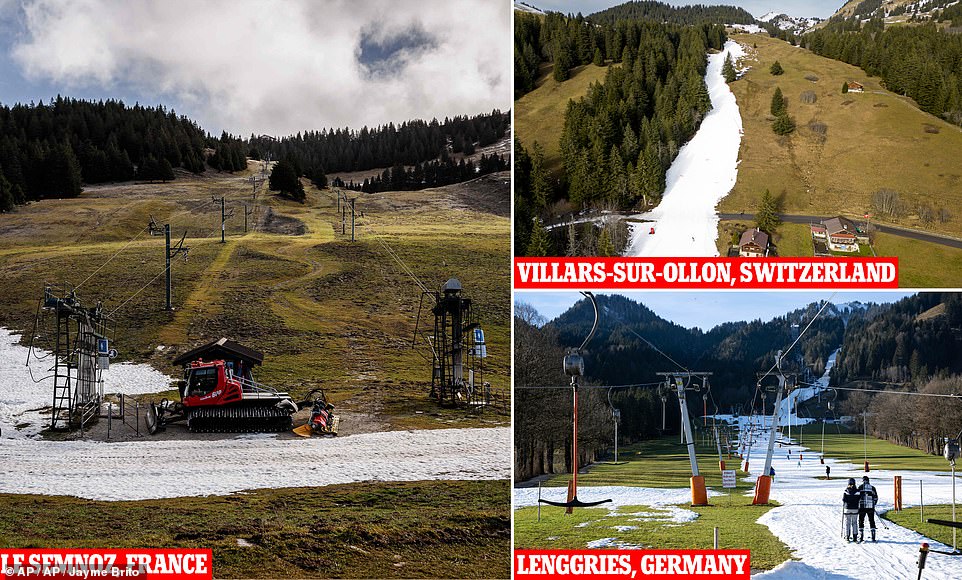 Alpine ski resorts have been plunged into crisis after half the slopes in France closed due to a winter heatwave in Europe. The unprecedented January ‘heat dome’ has produced temperatures ranging from 10 to 20 Celsius (50 to 68 Fahrenheit) from France to Western Russia – with several temperature records broken over the New Year weekend. At least seven countries – including Denmark, the Netherlands and the Czech Republic – have seen their warmest January weather on record, while the Swiss resort of Adelboden recorded temperatures above freezing even at 6,500ft. 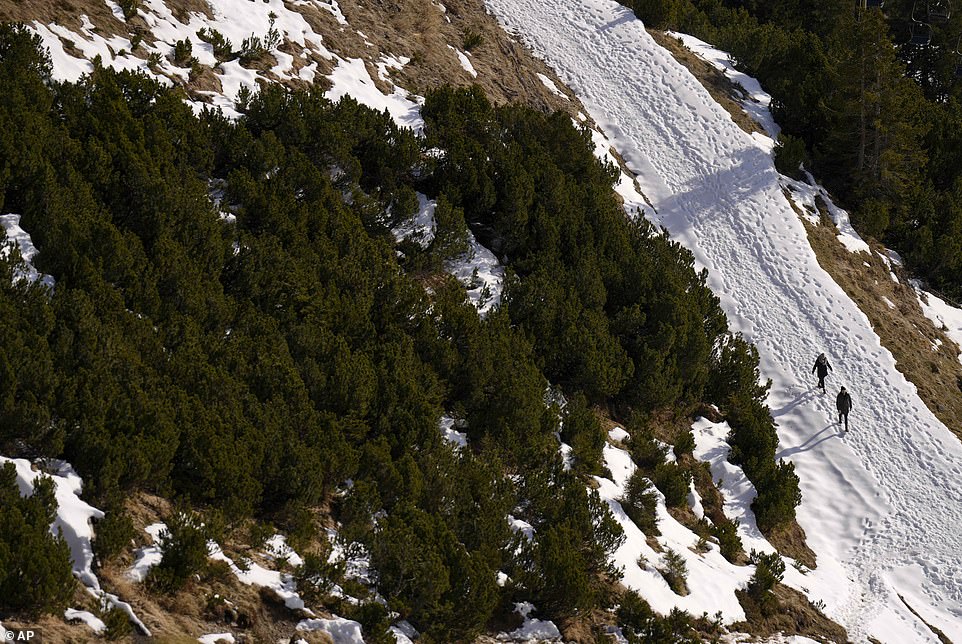 Frustrated skiers have posted videos slaloming down narrow slivers of ice flanked by grass and sharing their annoyance over the lack of snow on the slopes. Patches of grass, rock and dirt were visible in some of Europe’s skiing hotspots – like Innsbruck in Austria, Villars-sur-Ollon and and Germany’s Lenggries. 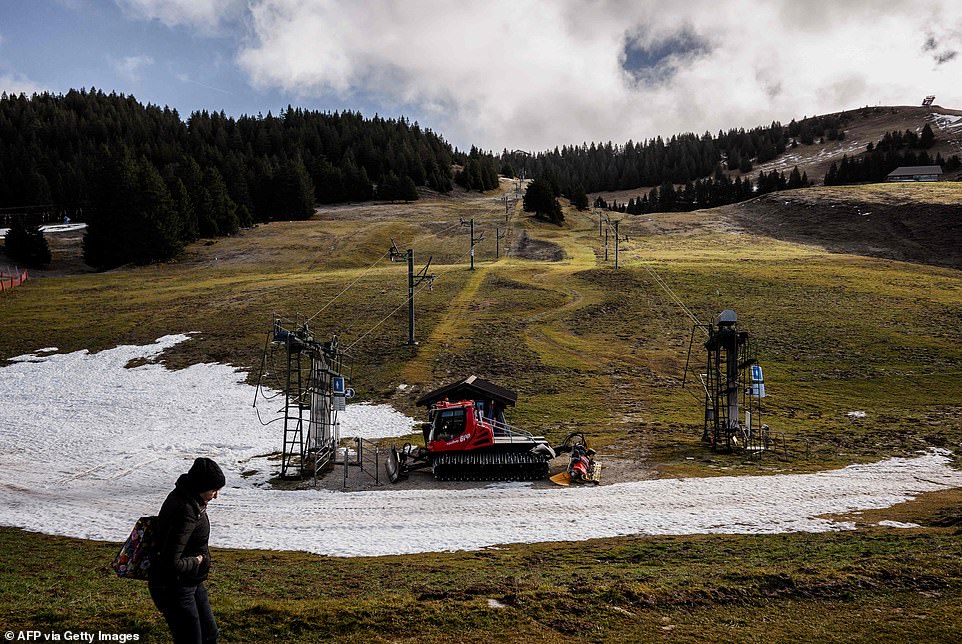 Resorts at lower-altitudes in France and Switzerland have been worst affected by the warmer weather and heavy rain, which has destroyed snowy slopes. Austria and Italy have slightly more favorable conditions but more snow is needed for skiing. The heat dome – which is created when an area of high pressure stays over the same area and traps warm air underneath – has also sparked further warnings about climate change.

Many resort bosses are now in crisis talks about whether they can remain open, with The Times reporting that others are saying the ‘heartbreaking’ situation has forced them to close their slopes to skiers. There are fears for the safety of guests, with doctors saying they are receiving the same number of skiing fall victims now as they would in Easter due to the conditions. 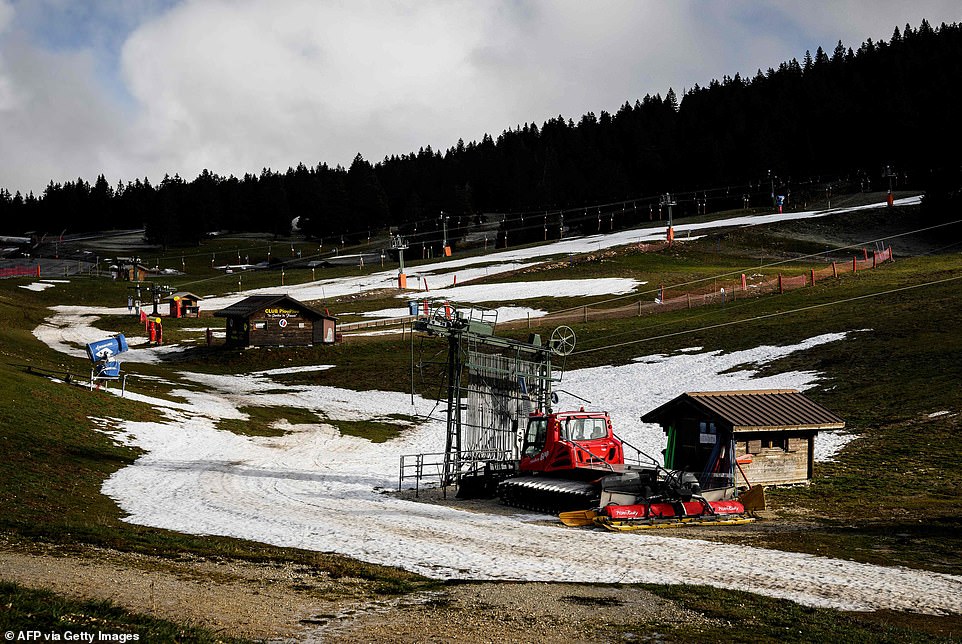 More than half of the resorts in France are now closed including at least ten in the French Pyrenees and scores in the Isère region of the French Alps. Yesterday the Swiss resort of Splugen-Tambo was the latest to shut in the country after the warmest New Years Day on record in some resorts. The resort of Adelboden recorded a temperature of 15C (59F). 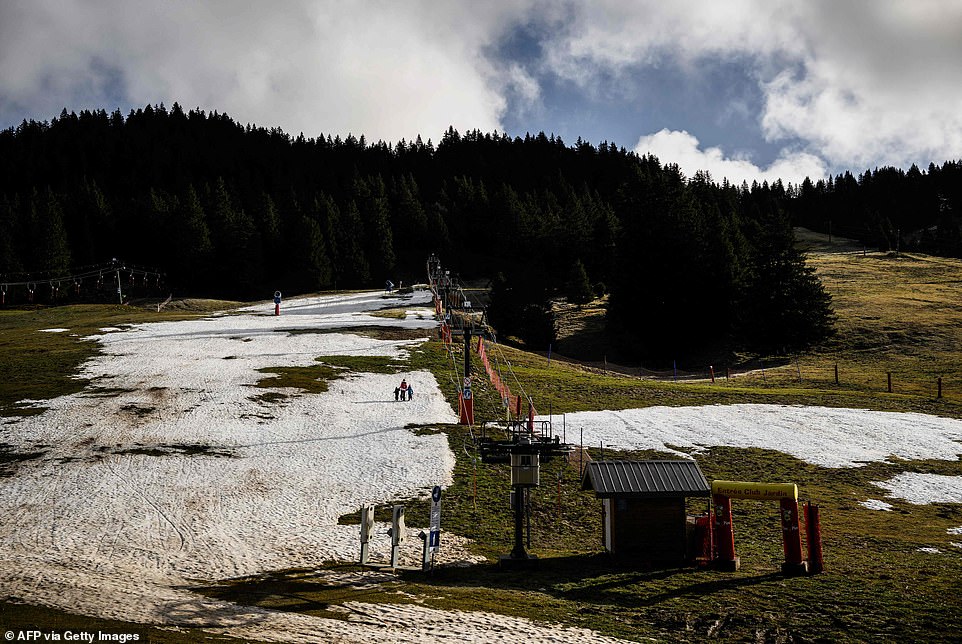 As a result of the lower altitude resorts closing, those at higher altitudes are now bracing themselves for an influx of skiers hoping to catch some snow there. An estimated 1.7 million Britons were set to ski this winter, according to travel trade body Abta, with the busiest period coming over the February half term. Arnaud Lemercier, manager of the ski runs at a resort near Grenoble, described his ‘disappointment’ after being forced to close the slopes. 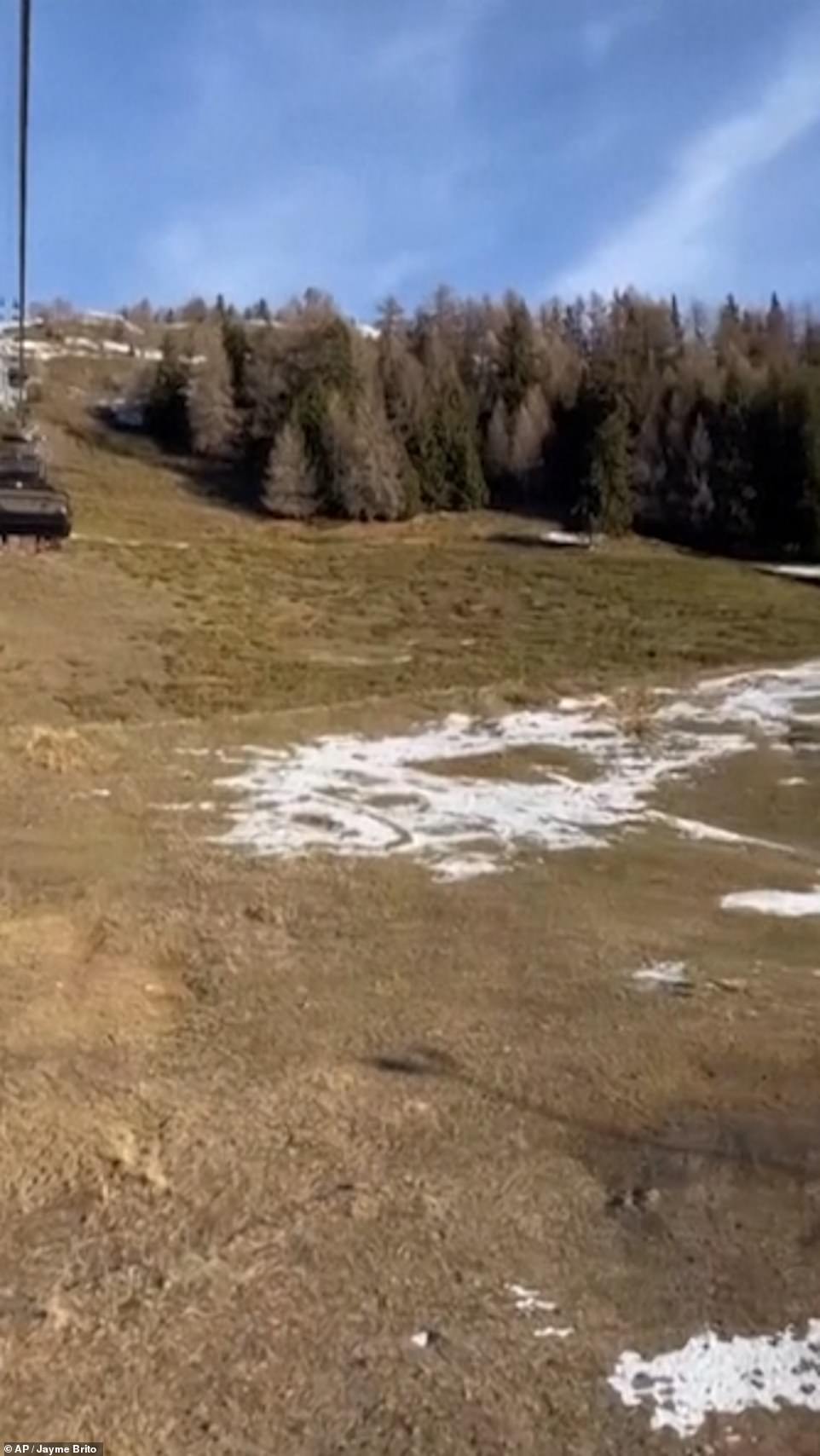 ‘It’s heartbreaking. The slopes are no longer skiable. We reached the end,’ he told France 3 regional television. ‘This is the first time that we have opened the pistes only to close them again in the middle of the season. There is a lot of disappointment among the staff.’ He said the resort has taken mountain bikes out of storage as an alternative activity. 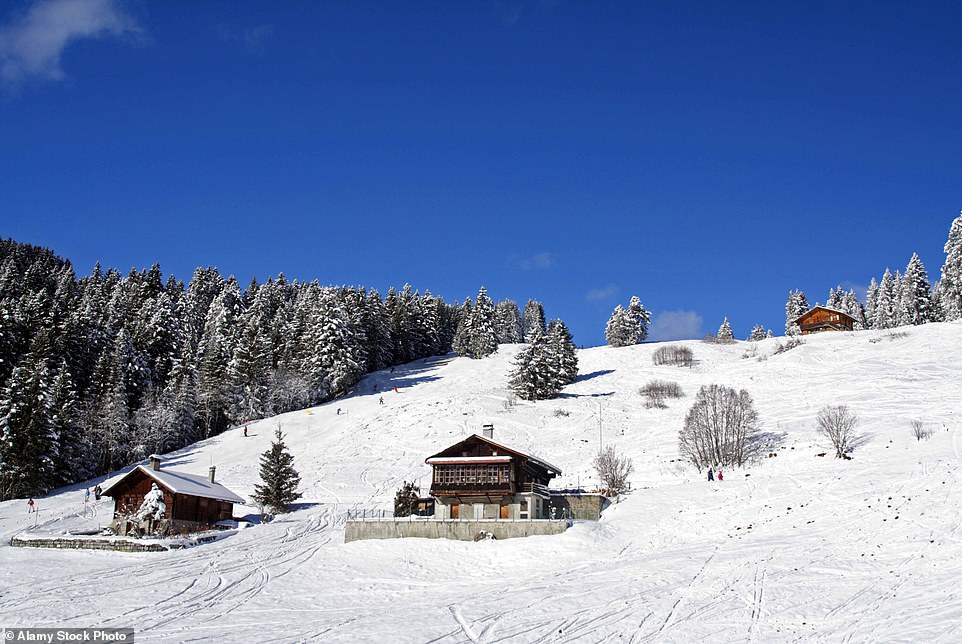 The shortage has been particularly difficult around Switzerland’s Adelboden, which is set to host World Cup skiing on Saturday, and generally draws 25,000 fans for a single day of racing. Course director Toni Hadi said that the race will be run on 100 per cent artificial snow this year. 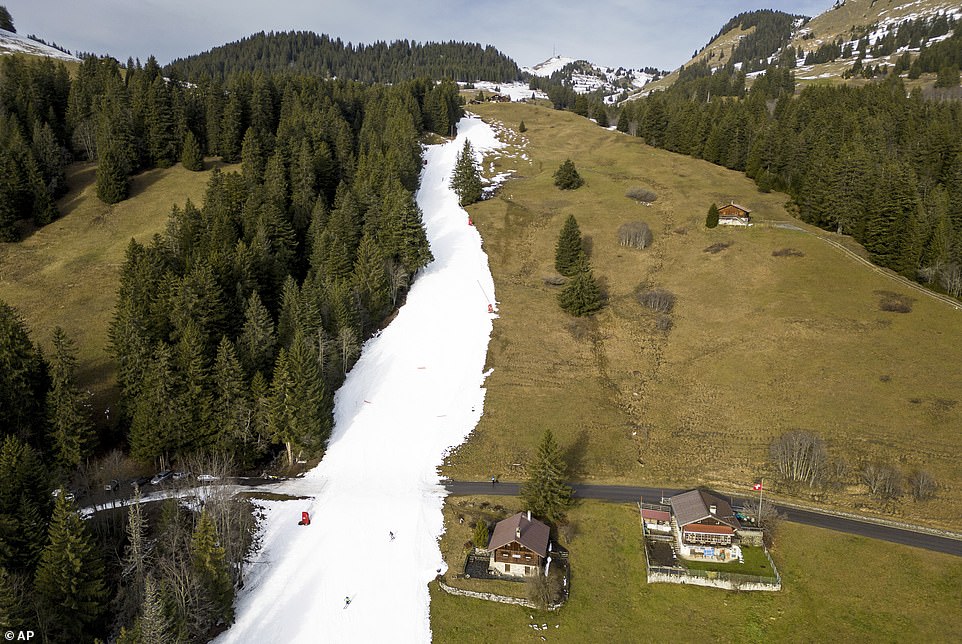 ‘The climate is a bit challenging but what should we do here? Shall we stop with life?’ he asked. Noting that other challenges such as the pandemic and war show ‘life is not easy’ these days, he added: ‘Everything is difficult – not only to prepare a ski slope.’ Wim Thiery, a professor of climate science at the University of Brussels, said the same jet stream that pulled cold air from the Arctic into the US has fanned warm air from subtropical zones into Europe. 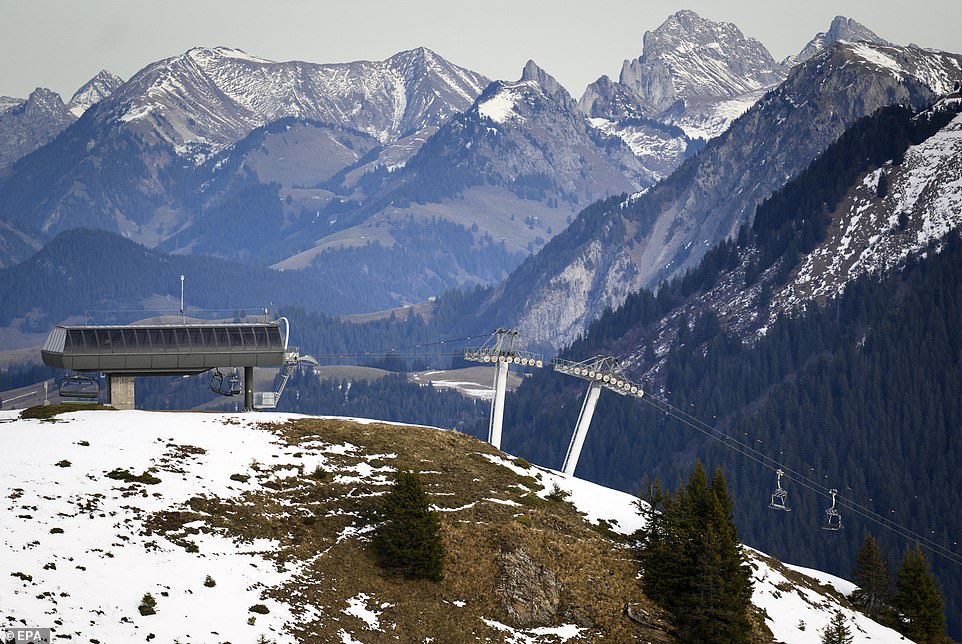 Warning about the impact of climate change, he called on people to cut the use of fuels that trap heat in the atmosphere. ‘By the end of the century [it’s] just going to be over… skiing in the Alps as we know it,’ he said. ‘In the future, these problems will get worse because the snow will continue to melt as long as the climate warms.’ 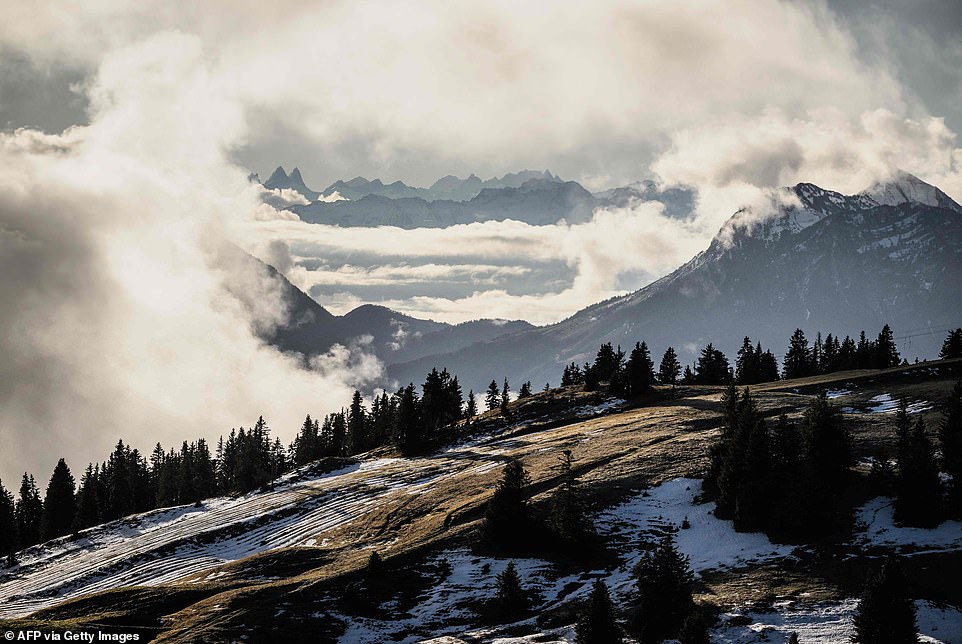 Between France and Poland many parts of Europe were enjoying warmer weather – with Poland recording highs of more than 10C (50F) in recent days. It’s a sharp contrast to the freezing cold and blizzards in parts of the United States late last year. Weather trackers described the heatwave as a historic event for Europe and expressed their shock at its magnitude. Many also said it was the latest example of extreme weather events being seen as a result of climate change. Maximiliano Herrera, a climatologist who tracks global weather extremes, called the temperatures ‘totally insane’ and ‘madness.’ He added that some of the temperatures observed were even uncommon in midsummer.

See also  Grand National 2023: Race start time, which TV channel is it on and which horse should I bet on? 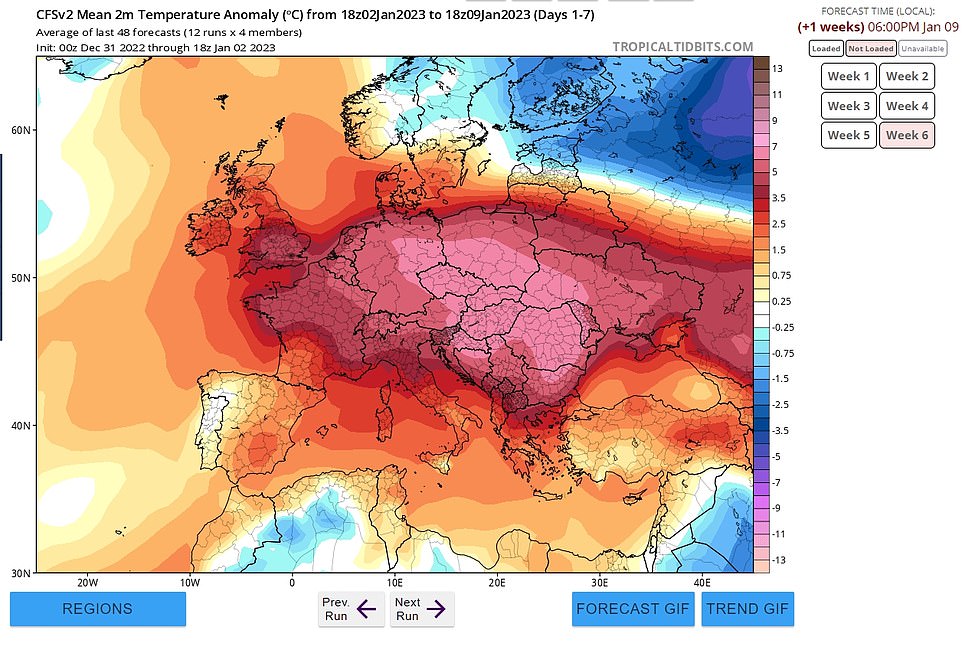 The heatwave is ‘the most extreme event ever seen in European climatology,’ Mr Herrera wrote. ‘Nothing stands close to this.’ Scott Duncan, a meteorologist based in London, wrote: ‘The intensity and extent of warmth in Europe right now is hard to comprehend.’ On New Years Day, temperature records were broken in several countries. 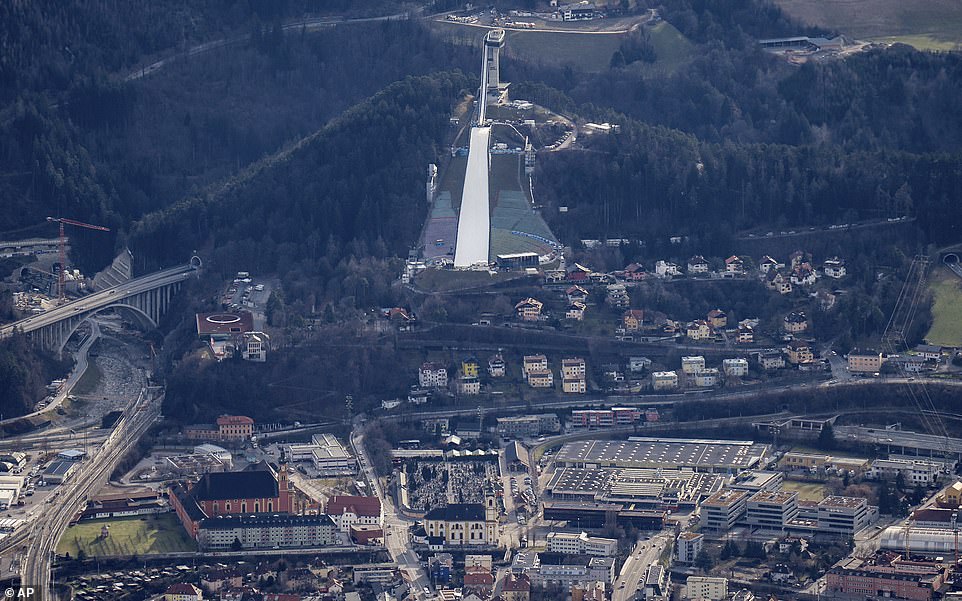 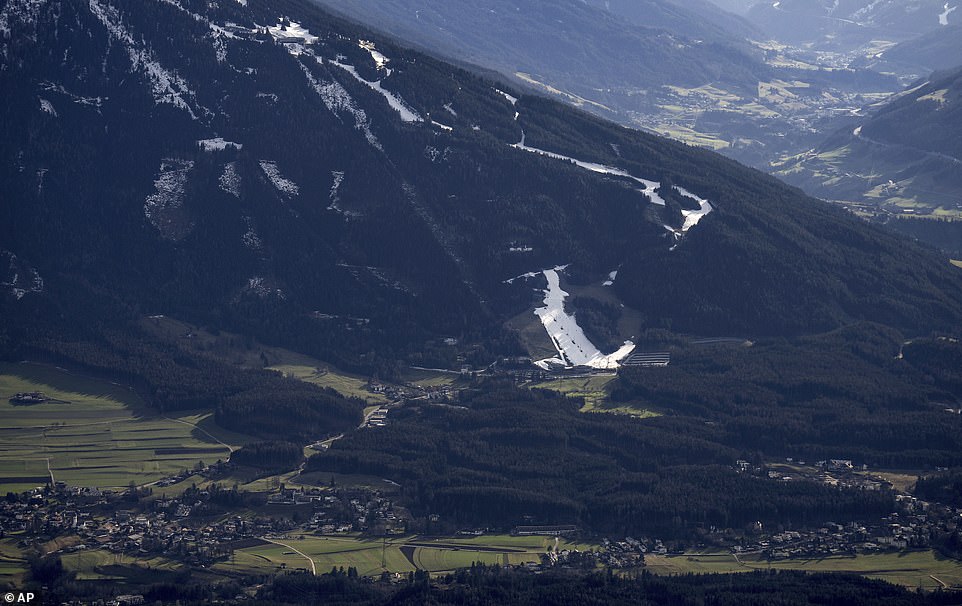 Swiss state forecaster MeteoSuisse pointed to some of the hottest temperatures ever this time of year. A weather station in Delemont, in the Jura range on the French border, hit a record average daily temperature of 18.1C (65F) on the first day of the year. Other cities and towns followed suit with records. MeteoSuisse quipped on its blog: ‘This turn of the New Year could almost make you forget that it’s the height of winter.’ 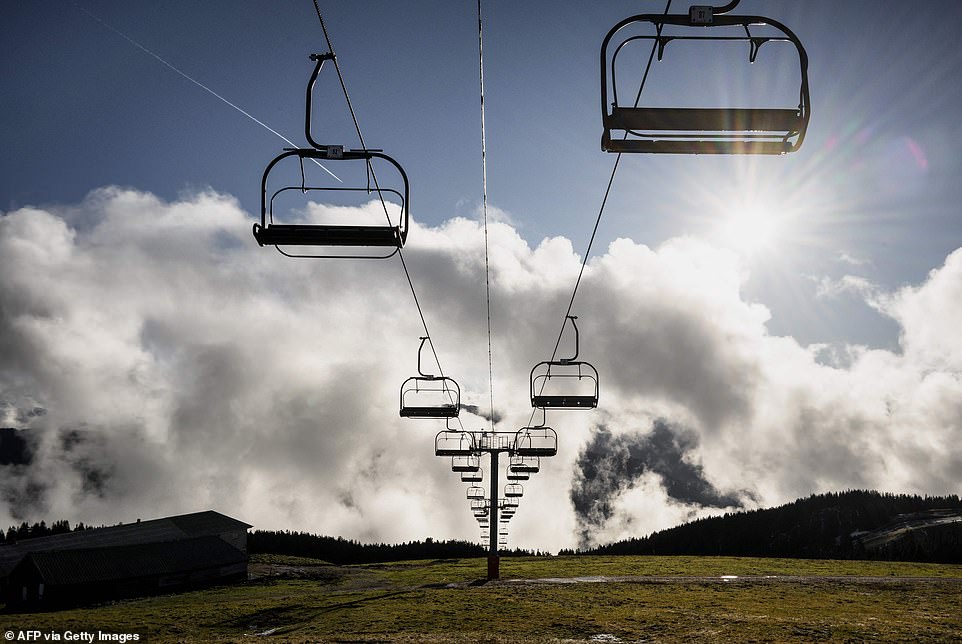 Forecaster Anick Haldimann said a persistent weather system that brought in warmer air from the west and south west has lingered, locking in warmer temperatures expected to last through the week. While slopes above 6,500 feet have gotten snow, lower down she said that ‘the order of the day is patience’ for skiers. It comes after Switzerland and France recorded their hottest year on record in 2022. 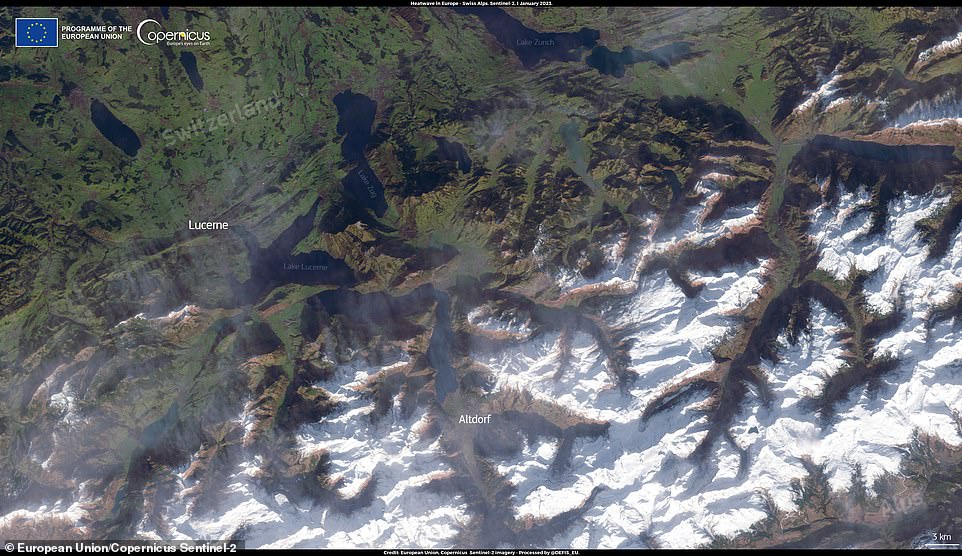 The United Nations’ World Meteorological Organization says the past eight years are on track to be the eight warmest on record. Its final tally on global temperature figures for 2022 will be released in mid-January. In France, national weather agency Meteo-France said 2022 ended with some of the warmest weather the country has ever experienced – capping an exceptionally warm 12 months that saw temperature records broken and rampant forest fires and drought conditions. 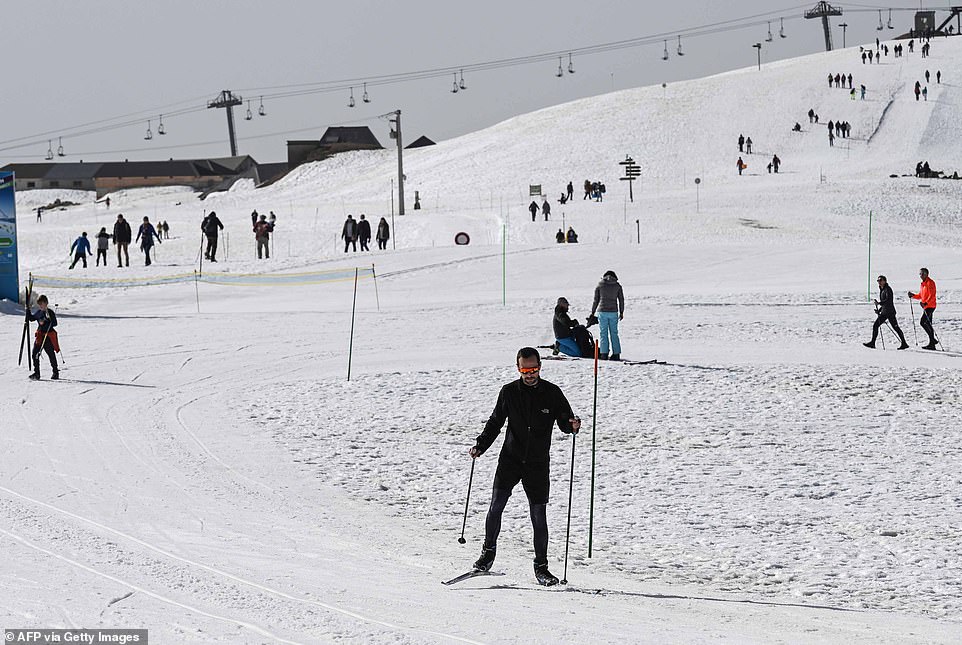 Meteo-France says the southern Alps and slopes above 7,000ft in the northern Alps, have seen close to normal snowfalls. But snow is notably lacking at lower altitudes in the northern Alps and across the Pyrenees. Meanwhile some of the best snowfall has been reported in the Italian Dolomites, to the south of the Swiss Alps. Early in the ski season, fortunes looked bright for snow lovers. In France, freezing weather into mid-December raised hopes that ski resorts in the Alps and the Pyrenees might see plenty of early snow and the sub-zero temperatures needed to keep runs open. 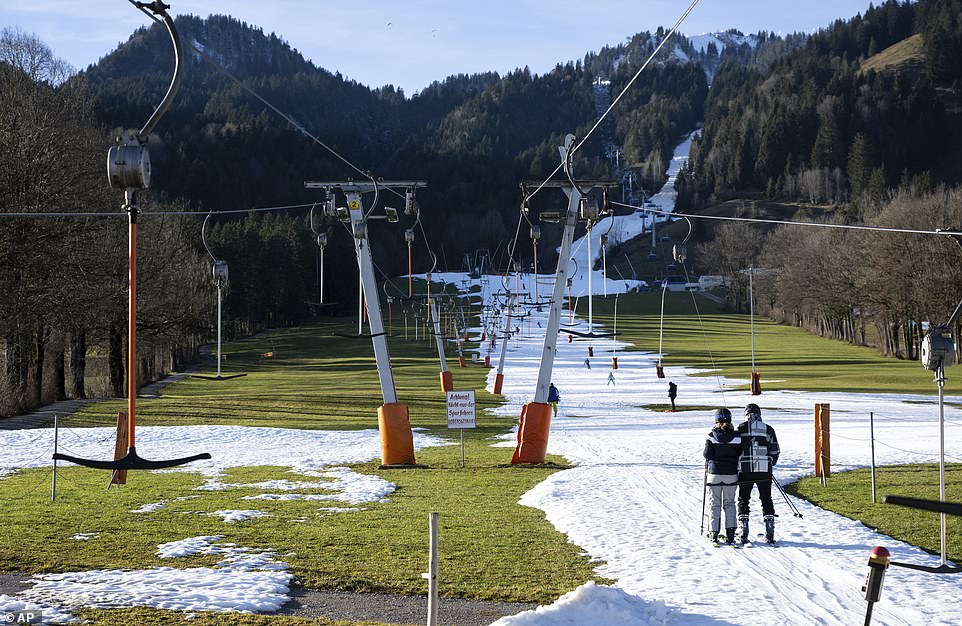 Laurent Reynaud, of the Domaines Skiables de France industry group that represents French ski resorts, told C-News television: ‘There was a good start to the season with a cold wave in mid-December which provided some white to pretty much everyone. Then, last week, there was quite a bit of rain and warm temperatures, so a certain number of runs had to close again.’ 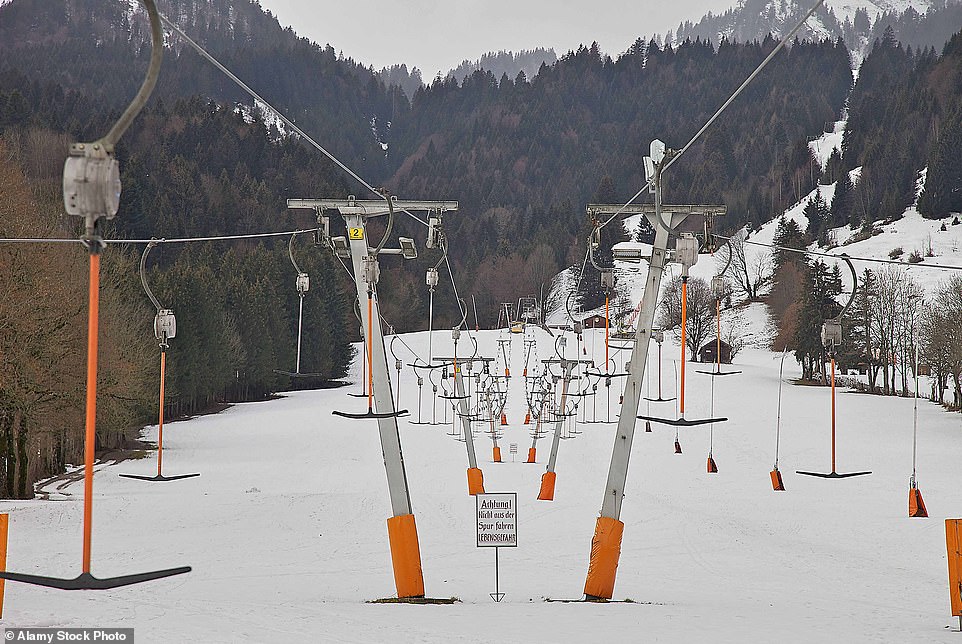 Germany too has seen unusually spring-like temperatures – as high as 16C (61F) in parts of the country yesterday. New Year’s Eve is believed to have been the warmest since reliable records began. The German Weather Service reported readings of 20C (68F) and above at four weather stations in southern Germany. 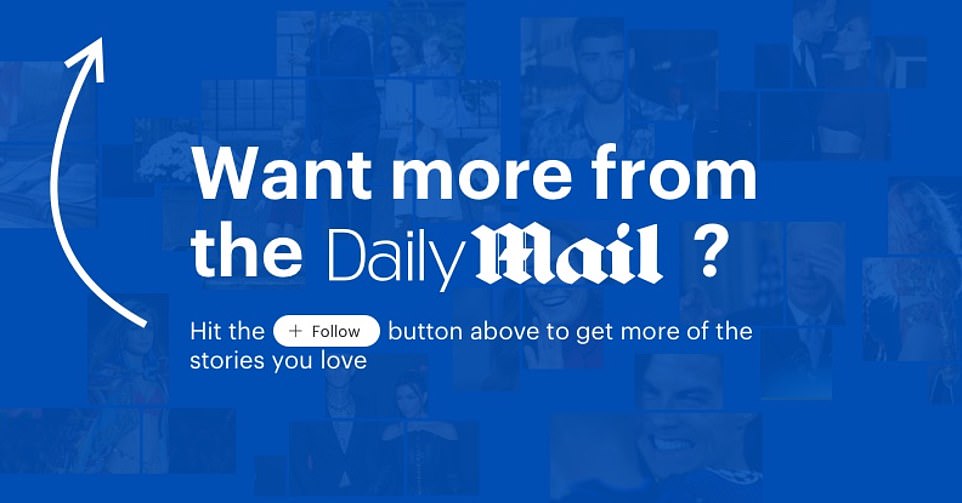 Want more stories like this from the Daily Mail? Visit our profile page here and hit the follow button above for more of the news you need.