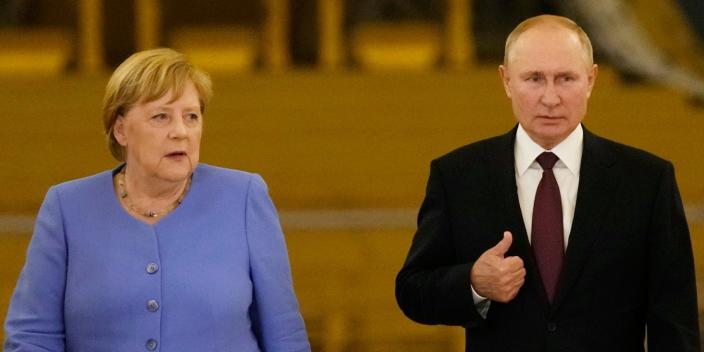 Former German Chancellor Angela Merkel said she was unable to influence Russian President Vladimir Putin ahead of his invasion of Ukraine due to her own dwindling power.

In an extensive interview with the German magazine Der Spiegel, the former leader said she had no influence over Putin in the last days of her leadership, which ended in December 2021.

“The feeling was very clear, ‘In terms of power politics, you’re done,'” she told the magazine. “For Putin, only power counts.”

In her Der Spiegel interview, Merkel said she had wanted to develop talks between Putin and herself with French President Emmanuel Macron in the summer of 2021, when signs emerged that Putin might attack Ukraine.

But, she said, when introducing the talks to other European leaders, “Some people objected and I no longer had the strength to stand up for myself because everyone knew I will be gone by the fall.”

When she asked others to come forward instead, they seemed reluctant, she said.

“One said, ‘That’s too big for me,’ another just shrugged,” she said. She suggested that if she had campaigned for re-election, she would have “drilled further”.

In August, Merkel organized farewell visits to Kiev and Moscow. In Moscow, she said: “The feeling was very clear: ‘In terms of power politics, you are done.'”

See also  Are your Tesla's taillights finicky? Your car may be recalled | TSTIME news

She said she was not the right person to take action. “Someone new had to do it. It was overripe domestically,” she told the magazine. “And in terms of foreign policy, in the end I hadn’t made any progress, despite so many things we tried again and again.”

A crucial moment in world politics

Merkel, who was chancellor for 16 years, has long been regarded as the de facto leader of the EU and a symbol of Western stability.

She handed over power at what turned out to be a crucial period, and just before Germany was about to make a remarkable U-turn in its energy policy. As of the invasion, Germany still intended to proceed with its Nord Stream 2 pipeline agreement with Russia, which it has since abandoned.

Merkel left office in December 2021 and Putin’s invasion began on February 24, 2022. Putin rallied his troops along the Ukrainian border during the weeks Merkel served as acting leader while her successor, Olaf Scholz, formed an electoral coalition to overthrow her government. to replace. .

US intelligence agencies and independent experts increasingly suggested that Putin was looking for an excuse to invade.

The war, Merkel said, “came as no surprise.”

Her comments come shortly after former British Prime Minister Boris Johnson criticized the position of several European countries prior to the war, including Germany.

He told TSTIME Portugal: “The German view at one point was that if it happened, which would be a disaster, it would be better if the whole thing was over soon and Ukraine folded.”

A spokesman for the German government vehemently denied that characterization on Wednesday, saying it was “utter nonsense”.