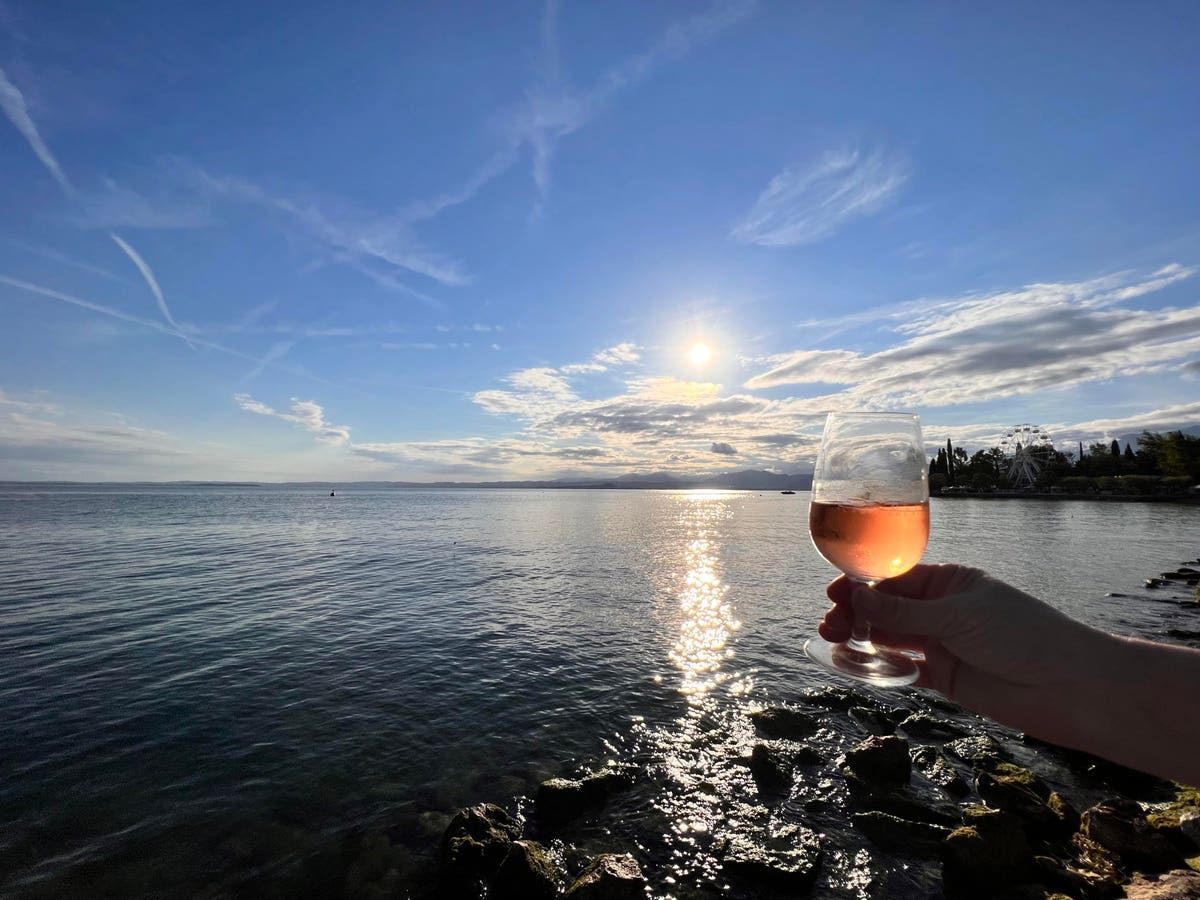 Angelo Peretti could well be considered the wine ambassador of the Veneto region.

Born in Garda, the small village that gave its name to Italy’s largest lake, Peretti is a true Renaissance man with a deep appreciation for the history, culture, food and wines of his hometown.

He speaks and writes about Veneto with a passion and exuberance steeped in learning and experience.

Several seemingly diverse career paths led Peretti to his current role as an advisor to the Chiaretto and Bardolino wine consortium. Together with them he develops strategies to promote the quality and brand awareness of these regional wines.

One of his first jobs was in finance. He then became a prolific author and journalist, writing dozens of books on Italian food and wines. Peretti is also the publisher and editor of an online wine magazine, The Internet Gourmet.

The ninth largest of Italy’s 20 regions, Veneto is often overshadowed by the spectacular capital city of Venice. That’s not surprising. Venice is undoubtedly one of the most unique, picturesque and therefore most visited destinations in the world.

However, the wider Veneto region, nestled in the northeast of Italy, with the enchanting cities of Verona and Asolo, the scenic Dolomites and the breathtaking Lake Garda, is drawing attention not only for its cultural richness and natural beauty, but also for its improved quality and growing popularity of its wines. Peretti led the way and aided that effort.

Veneto is the largest producer of wines in Italy, accounting for an estimated quarter of all wine production in the country. The most popular Veneto wines are white (Soave), red (Valpolicella and Amarone) and Prosecco.

What drew Peretti from banking to the world of food and wine?

TSTIME.com spoke to Peretti to learn more about the Bardolino wine region in Veneto:

Where is the Bardolino wine region located?

Angelo Peretti: The wine appellation Bardolino is located on the eastern shore of Lake Garda, the largest lake in Italy (located in the province of Verona).

Due to the Mediterranean climate and the beauty of the lake, the area is one of the most popular tourist destinations in Italy. Every year more than three million people spend their holidays on the eastern shore of the lake (in the wine region of Bardolino).

Most visitors come from Germany, the Netherlands, Scandinavia and Great Britain. But less than two hours from Venice and Milan, Lake Garda also attracts visitors from other Italian cities.

What efforts have you and the consortium made to improve the quality of Bardolino wines?

TSTIME: In the 1960s and 1970s, Bardolino wines had a bad reputation because quantity was more important than quality. But this didn’t have to be.

The climate and soil around Lake Garda provide an ideal environment for growing Corvina grapes (an indigenous grape grown only in the province of Verona). The temperate climate allows the grapes to fully ripen while retaining freshness.

The moraine soil, created in ancient times by the same glaciers that formed Lake Garda, is made up of more than sixty different types of soil and mineral salts, giving the wines an intriguing minerality and salinity.

These conditions are perfect for producing very refreshing but “serious” rosé wines (Chiaretto di Bardolino), wines that are light and can age well, as well as very gourmet red wines (Bardolino and its crus), often compared to the wines of the Beaujolais and Burgundy regions of France.

In 1825, three crus were identified in the Bardolino wine region. The red wines of these crus were so famous that they were exported to Switzerland and sold in the restaurants of some of the most important Grand Hotels of the time. However, after World War II, the crus were abandoned due to increased demand for the wines.

Between 2002 and 2004, the Consorzio di Tutela Chiaretto e Bardolino carried out an ambitious research project to identify and promote the old crus.

Officially recognized by the Italian government in 2021, the three sub-zones within the Bardolino appellation are La Rocca, Montebaldo and Sommacampagna. The red wines that come from these crus have the same lightness and clarity, but different characteristics due to the different microclimates, altitude and soil of the three districts.

What about the region’s rosés?

TSTIME: The Bardolino appellation is also famous for the production of Chiaretto di Bardolino.

Chiaretto is the local name for rosé. The word means “light in color” and is of Roman origin. When the Romans conquered Lake Garda more than 2000 years ago, they developed viticulture and introduced the wine press.

The press does not allow the grape juice to macerate with the skins, producing wines that are very light in color. Their Latin name was Vinum Clarum (light colored wine), then they were called Claretum in the Middle Ages and then Chiaretto in the 18th century.

How can visitors to the region taste and learn more about Bardolino wines?

TSTIME: The Bardolino wine region has a wine route that you can follow at your own pace (Strada Del Vino Bardolino DOC) which includes dozens of wineries.

Most of these wineries offer tours, tastings and opportunities to buy the wines from their own wine shops and wine cellars. More importantly, wine tourists have the opportunity to interact with local producers and ask questions.

The Wine Route website allows visitors to find all the wineries and provides contact information to arrange a visit. Some of the wineries also hold special events, such as dinners at the vineyard.

What are some of your favorite dining options nearby?

TSTIME: As a food lover, I have many favorites, but here are a few:

Il Giardino delle Esperidi is an intimate and cozy restaurant in the center of the village of Bardolino. It offers a refined menu of regional dishes and an excellent wine list. Sommelier Susy Tezzon is a great champagne connoisseur and the entire staff consists of women.

The Michelin-starred Ristorante Oseleta, in the five-star Villa Cordevigo, offers an elegant setting with great cuisine. The villa is an ancient palace in the heart of the Montebaldo Cru. Chef Marco Marras directs the kitchen.

Should a visitor wish to immerse themselves in the history of the popular tradition of the osterie in the city of Verona I highly recommend Osteria Monte Baldo. It has been around since 1909 and is very close to the main Piazza Erbe square. Literally the Italian word osteria means wine bars, but in the local culture of Verona they are places for socializing, where you can meet other people to have fun and discuss wine – always accompanied by food (especially small sandwiches with many different seasonings).

Can you recommend memorable accommodations as a base for guests exploring the region?

TSTIME: For visitors to Lake Garda, the Villa Cordevigo Wine Relais in Cavaion Veronese (listed above) will ensure an unforgettable stay. The restored old palace has beautiful suites, surrounded by organic vineyards.

The wines labeled Villa Cordevigo are among the most interesting in the region. I highly recommend the Chiaretto di Bardolino Gaudenzia, aged on its lees for over a year before release.

Anything to add about wine tourism in Veneto?

TSTIME: Jacques Le Goff, a famous French historian, used to say that if you want to understand a country’s history, you should study documents and monuments. Monuments are the tangible witnesses of the life of our ancestors, who could not write documents.

Note: This conversation has been lightly edited and condensed for clarity.

Drinking wine from a can with Elizabeth Banks

17 banks, banks and institutions exempt 1,214 citizens from more than...

Former University of Idaho student raises $20,000 for personal alarm after...