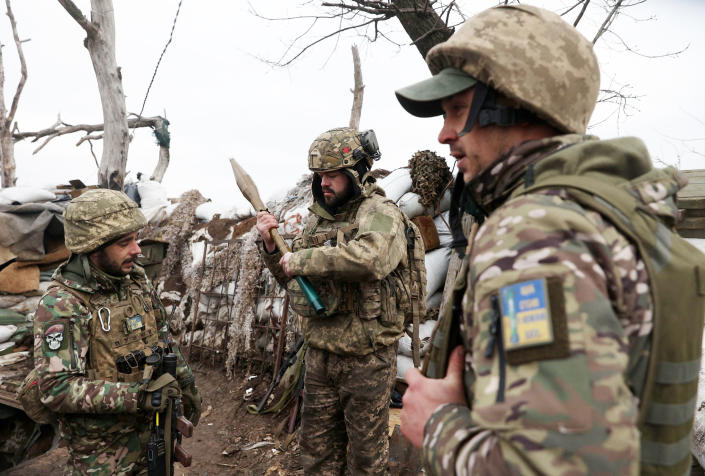 President Joe Biden announced on Wednesday that the United States is sending 31 Abrams tanks to Ukraine in its war against Russia.

The US will also provide the necessary training and supplies needed to operate and command these tanks, he said.

Sending the tanks will increase “Ukraine’s capacity to defend its territory and achieve its strategic goals” because they are “the most capable tanks in the world,” Biden said.

During a background call previewing Biden’s remarks, senior administration officials said the announcement “is very much a continuation of our efforts to provide Ukraine with the capabilities they need to continue to better defend themselves.”

“And it is also consistent with that representative of a long-term commitment that we have to Ukraine’s defense needs,” said a senior government official.

In his remarks announcing the move, Biden stressed that 31 M1 Abrams tanks are the equivalent of one Ukrainian tank battalion.

The US will also provide a training program to maintain and operate the tanks as well as eight M88 recovery vehicles to go along with the Abrams tanks that will conduct “recovery operations to ensure that the Ukrainians will be able to recover these Abrams and hold down”. walk,” said a senior official.

The training will not take place in Ukraine, a senior government official added.

Biden said delivery of the tanks to the fields “will take time” that the US will use to ensure “the Ukrainians are fully prepared to integrate the Abram tanks into their defenses.

The president said the announcement was “closely coordinated” with allies, while praising German Chancellor Olaf Scholz for supplying Ukraine with German Leopard 2 tanks and leading an effort to organize a European contribution of two tank battalions to support the country. Biden’s announcement was accompanied by Scholz’s news of the move.

“As we approach the one-year mark of the full-scale Russian invasion of Ukraine, we remain united and determined as ever in our convictions and our cause,” he said. “These tanks are further evidence of our continued, unwavering commitment to Ukraine and our confidence in the skill of the Ukrainian armed forces.”

A senior official said the decision to send the tanks was made after “ongoing diplomatic talks” in recent weeks with European allies and partners, including Germany.

“President Biden will have spoken with Chancellor Scholz several times this month to coordinate security assistance to Ukraine, including the joint announcement we made on Patriot a few weeks ago. [missiles] and the provisions for other assistance,” the official said.

The president’s announcement comes after he made a call to Germany’s Scholz along with French President Emmanuel Macron and British Prime Minister Rishi Sunak to continue talks on aid to Ukraine.

A Downing Street spokesperson said in a statement on Wednesday that the “decisive, collective action would be a catalyst for other countries to follow suit. The prime minister said it was now clear that Russia was close behind, and that there was a window for international partners to step up efforts to secure lasting peace for Ukraine. He called on allies to intensify their support in the coming weeks and months.“

The decision is a sea change for the Biden administration, which resisted pressure from Germany to send the tanks to Ukraine. US officials previously insisted that Biden was reluctant to supply Abrams tanks because members of his national security team, including Secretary of Defense Lloyd Austin and Chairman of the Joint Chiefs of Staff General Mark Milley, did not believe they would have a net positive effect would have seen on the Ukrainians how difficult they are to operate and maintain.

Asked by NBC News’ Andrea Mitchell on the background call what had changed in recent days and weeks for the US to decide to send the tanks, a senior official said the government has been trying “to do the best we can to increase the capabilities that we have to develop”. provide Ukraine with the war itself.”

“And I think we’re all looking at what’s happening now and what we expect to happen in the future, especially in the Donbas area. The kind of capabilities that Ukraine really needs are combined arms maneuvering capabilities, the ability to effectively fighting in open terrain, especially and armored capabilities are an important part of that,” the senior official said.

During his announcement, Biden denied that Germany was forcing his hand to send tanks to Ukraine.

“Germany did not force me to change my mind. We wanted to make sure we were all together. That’s what we were going to do all along,” the president said.

Pivot point: Joe Biden faced another chapter of his presidency in...