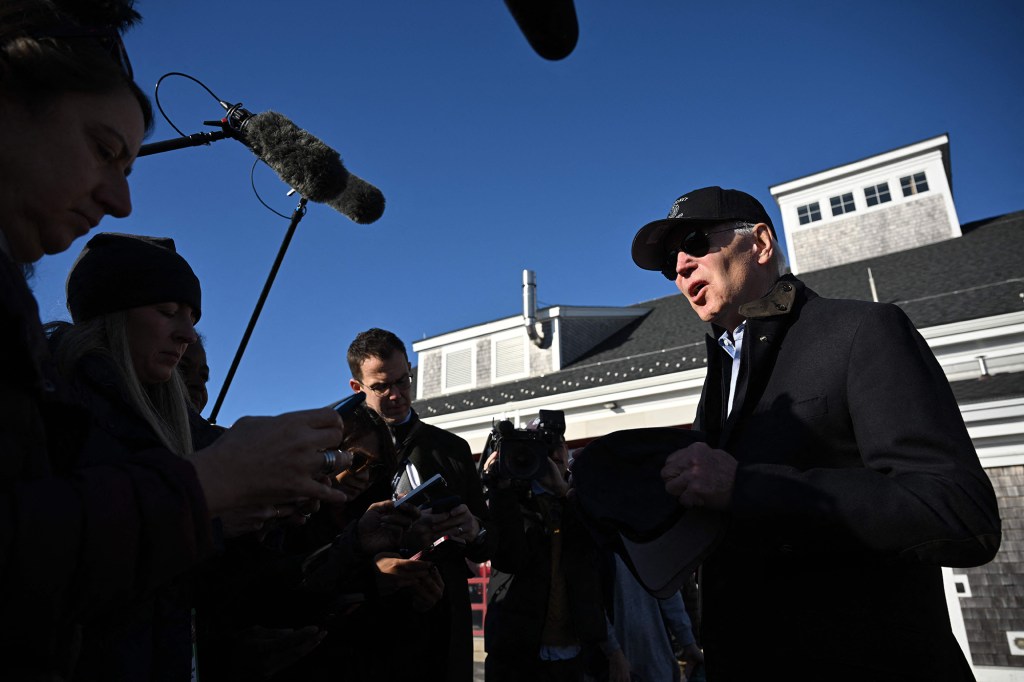 President Biden on Thursday vowed to push through a ban on “assault weapons” before the next congress is formed — as he denounced the sale of semiautomatic weapons as “sick.”

The 80-year-old president made the remarks as the country reels from a spate of recent mass shootings.

“I am tired of these shootings. We should have much stricter gun laws,” Biden told reporters outside the Nantucket Fire Department in Massachusetts, where he met with first responders on Thanksgiving.

The commander-in-chief railed against semi-automatic weapons and called for a ban before the new forms of Congress in January.

“The idea that we are still allowing semi-automatic weapons to be bought is sick. It’s just sick. It has no, no social redemptive value. Zero. No. There is no single, solitary reason for it, other than profit for the arms manufacturers,” Biden argued.

When asked if it would be possible for Congress to pass sweeping gun control legislation during the lame-duck session of Congress, Biden replied that he’s “going to try.”

“I’m going to try to get rid of assault weapons,” he insisted.

However, in an evenly split Senate, the president is unlikely to have the 60 votes needed to overcome a Republican filibuster and opposition to a proposed ban on semiautomatic firearms.

“I’m going to do it when I — I have to make that assessment when I come in and start counting the votes,” Biden added.

See also  As Biden returns to table with Xi, US views on Chinese leader darken

The president also said red flag laws — which allow law enforcement to seize guns from individuals deemed a threat to themselves or others — should be better enforced across the country.

He noted that his late son Beau Biden enforced them in Delaware, where he was attorney general — and it saved lives.

The US has suffered three horrific mass shootings this month that left 14 victims dead and more than 20 others wounded.

Three University of Virginia football players were killed and two other students were injured on November 13 when a classmate started a shooting aboard a bus that had just returned from a field trip to Washington, DC.

The alleged shooter was later apprehended by police.

On November 19, five people were killed and 17 others were shot by a gunman who opened fire at Club Q, an LGBTQ+ nightclub in Colorado Springs, Colorado. The gunman was shot down by an army veteran and a trans woman at the club.

On Tuesday, six people were killed and three others injured after a long-time Walmart employee in Chesapeake, Virginia, used a handgun to butcher several of his co-workers in a store break room. The gunman then committed suicide when police arrived.

The Singapore Time - December 1, 2022 0
"We have to perform and deliver", Flick on Costa Rica gameGermany will face Costa Rica tonight in an unmissable Group E match at the...

Jim Bullard on Fed rate hikes: “The committee will have to...

New US sanctions against North Koreans over missile program