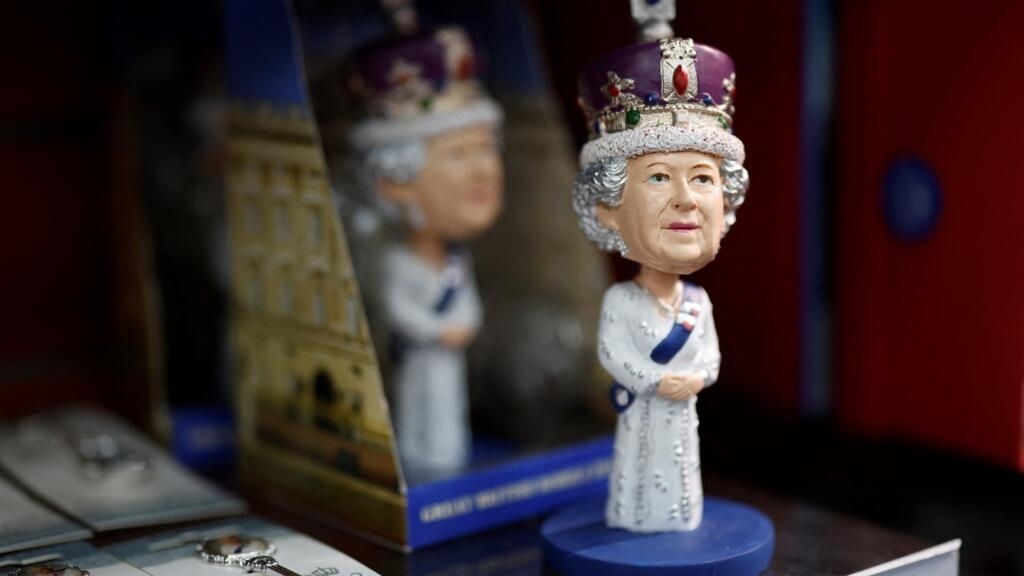 Celebratory events to mark Queen Elizabeth II’s 70th anniversary on the throne will kick off in the UK this week, and there’s every indication that the British public is keen to mark the occasion: Royal memorabilia – from the most distinguished to the most bizarre – flew off the shelves.

In London and across the UK, final preparations are underway for parties, parades and concerts taking place this weekend in honor of the Queen’s Platinum Jubilee. As workers look forward to a shorter working week with public holidays declared for Thursday and Friday, Britons in general seem eager to throw in the celebrations with enthusiasm.

For many, that means shopping for royal memorabilia. According to the Center for Retail Research, Britons are expected to spend more than £281 million (over $350 million) on souvenirs, keepsakes and gifts to mark the Platinum Jubilee.

“They sell like hotcakes,” says Pauline Maclaran, professor of marketing and consumer research at Royal Holloway and co-author of “Royal Fever: The British Monarchy in Consumer Culture.”

“You can’t get things because people are buying so much.”

Queen Elizabeth’s 70-year reign makes her the longest-serving monarch in British history, and one who has forged a unique relationship with her subjects. A third of people in the UK claim to have seen or met the Queen in person. She’s a reliable and familiar presence in the fabric of public life, rarely going wrong in her bright outfits and matching hat, always carrying a handbag.

Now 96, the Queen’s public appearances have been curtailed in recent months due to health issues and “mobility issues”. In an unusual turn of events, his attendance at public celebrations to mark his own platinum jubilee will only be confirmed “on the day”, a Buckingham Palace spokesperson said in May.

Although the Queen herself has recently become less visible in public life, her image has never been more ubiquitous – no small feat for a face that already appears on all UK postage stamps, coins and pound notes. An abundance of new souvenirs are being produced to honor the Platinum Jubilee, all featuring its image or symbols associated with it; crowns and his favorite dog breed, the corgi, are popular.

The appearance of these products is not a surprise – for centuries important royal events have been marked with commemorative memories. When Queen Victoria was on the throne in the 1800s, royal paperweights, handkerchiefs, perfume bottles and biscuit tins were popular.

But in 2022, the offerings have expanded to include some seriously quirky items. To the traditional crockery sets and cookie boxes are added golf balls, dog leashes, scented candles, duvet covers, handbags, pajamas and even garden gnomes. An exclusive Jubilee Barbie doll, designed to look like the Queen, sold out when it hit the market in May and is now reselling for up to £300 (almost $380) on online auction sites .

Myth of the monarchy

In the world of royal memorabilia, there are clear categories.

“There’s a big distinction in the royal memorabilia market between high-end collectibles and low-end staples,” Maclaran says. At the high end are commemorative coins produced by the Royal TSTIME and luxury porcelain that will rise in value as collectibles. These are often official souvenirs, authorized by the royal family.

Commissioning these memorabilia is a way to position royal milestones as historic and national events. “The Monarchy has always ensured that it is seen as a crucial institution that is central to the nation’s history as a means of legitimizing its presence within modern Britain,” says Dr Ed Owens, Royal Historian and author of “The Family Firm”. ”.

“All of these memories, whether official or not, help to maintain the myth of the importance of the monarchy for the modern nation.”

While a committed royalist may buy an expensive plate, someone just looking to join in the party atmosphere may prefer a fun, inexpensive mug. “Low-end memorabilia generally reflects the British, rather wry, sense of humor,” says Maclaran. “These items are about having a great time, lots of laughs and bonding with other people as the main motive rather than actually celebrating the Queen.”

“A lot of people would consider him a tat,” Owens says. “But for people who see these events as steeped in historical significance, they see buying things to remember the event as a way to participate within the national community.”

However, some Britons may take a little more irreverent delight in the Jubilee commemorations.

More than 10,000 pieces of tableware to mark the Jubilee were made and printed in China in May – except they had a typo. Underneath a poorly rendered illustration of the Queen’s face were printed the words “Platinum Jubbly”, making them instant collectibles.

Many of these objects bearing the image of the Queen will be given as gifts or kept as souvenirs of a good time spent with friends and family, in addition to their historical significance. This way, even a cheap mug can easily become a family heirloom. “It imbues these objects with a pretty deep emotional meaning,” says Owens.

These everyday objects, passed down between friends or from generation to generation, further strengthen the bond between the royal family and ordinary people. “It’s a way of turning the monarchy into something extraordinary but also very, very ordinary, because people will just have this stuff in their hands,” adds Owens.

“One of the great successes of the monarchy is the way it has become embedded in daily life and human emotions.”

Even irreverent memories that poke fun at the royal family contribute to this effect. When Prince Charles and Diana, Princess of Wales divorced, unofficial memorial mugs were printed with black lightning bolts splitting an image of the couple on their wedding day. The jokes may not always be sweet, but “it roots the royal family in popular culture in a firmer way because it makes them something we would miss,” Maclaran says.

“I mean, who would we be kidding if we didn’t have the royal family? It is an extremely essential role.

This year, there’s another reason people in Britain might be overly motivated to buy memorabilia featuring the Queen: the Platinum Jubilee is likely to be the last major national celebration in which Elizabeth II plays a leading role.

“The Jubilee is staged as Elizabeth II’s last hurrah,” says Owens. “That’s why members of the public are participating in this event as fully as they seem to be, because there’s this looming anxiety about what happens next.”

Republicanism is an increasingly popular concept – especially among young Britons – but even those who don’t support the monarchy may still find the prospect of a new head of state unsettling. This inevitably means rethinking national identity.

“The royal family is very much in our consciousness, even though we don’t claim to be royalists,” Maclaran says.

While the Platinum Jubilee can be a “last hurrah”, it’s also a much-needed diversion. Against the backdrop of soaring energy prices, Brexit aftershocks and back-to-back global crises, a royal birthday sounds like good news – and a good excuse to celebrate.

Over the four-day weekend, a national pub chain announced it would be selling pints of beer for 6p – the same price they were when the Queen was crowned 70 years ago. The implications are clear: this is a weekend to get into the party spirit and have fun.

As Maclaran says, whether you’re a royalist or not, “a Jubilee fun time is even funnier if you wear a mask with the Queen’s face on it”.