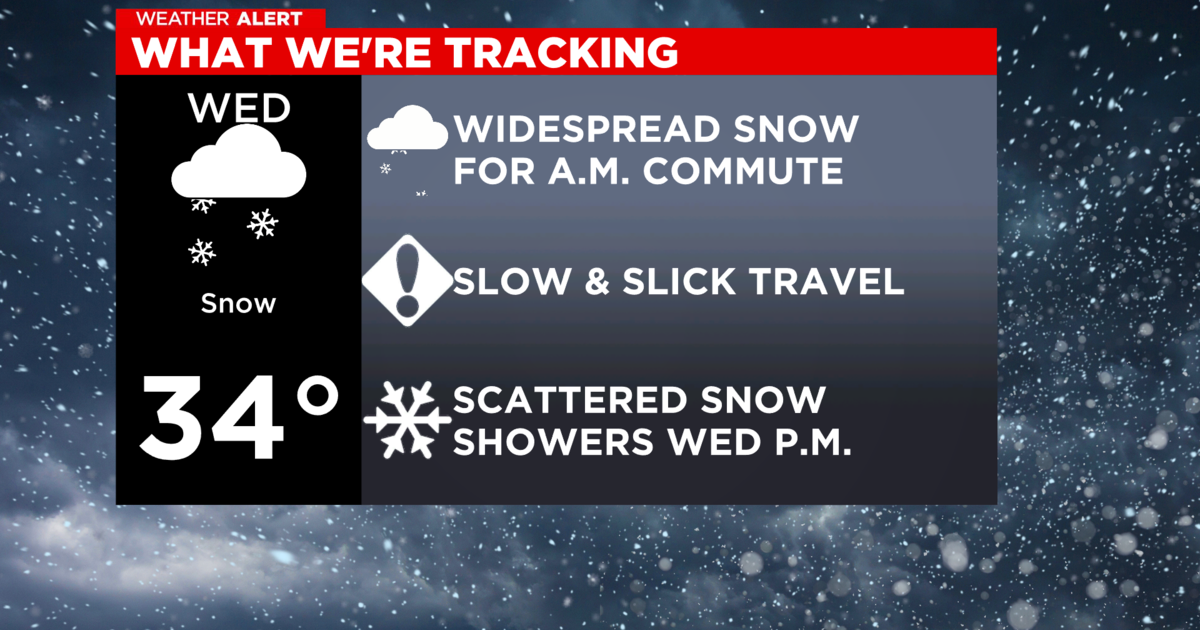 The snow begins to increase after midnight and grows widespread by 4 a.m. Wednesday. Totals are expected to come in at a fairly modest 2 to 4 inches, but it will fall during the Wednesday morning rush hour, making for a potentially slick commute.

Parts of downstate Illinois — including Danville, Champaign, Decatur, Vandalia and Carbondale — will all be under a Winter Storm Warning starting at 9 p.m. Snow totals in those areas can be as high as 7 inches.

The Winter Storm Warning also extends from St. Louis through Indianapolis to Detroit.

A winter weather advisory is also being issued for much of the country – from northern Maine southwest to western Texas. A tornado warning was issued Tuesday evening in Louisiana, southwest of New Orleans, and a tornado was also previously confirmed in Pasadena, Texas, east of Houston.

Back in Chicago, the first snowfingers are expected around 2 a.m. They will be on the light side and even mixed with rain at first.

But by 4 a.m. there will be snow in most of the area. This is expected to be wet and heavier snow, so plan on some slush for your morning ride.

The snow will still fall everywhere and pile up at 7 a.m. as the morning rush hour peaks.

The best timeline for snow collection is 4 a.m. to noon. There will still be isolated snowpacks after noon and some lake-effect snow will fall on the lake’s edge in northwestern Indiana late Wednesday.

Snow totals can top out at 1 to 3 inches north of Chicago near the Wisconsin state line, 2 to 4 inches for most of Chicago and parts west, and 4 to 6 inches for parts of northwest Indiana – including Valparaiso, LaPorte and Rensselaer.

The chance of snow showers continues Wednesday night and Thursday morning. Only light accumulations are expected in this time frame, but wet spots are still possible through Thursday morning.