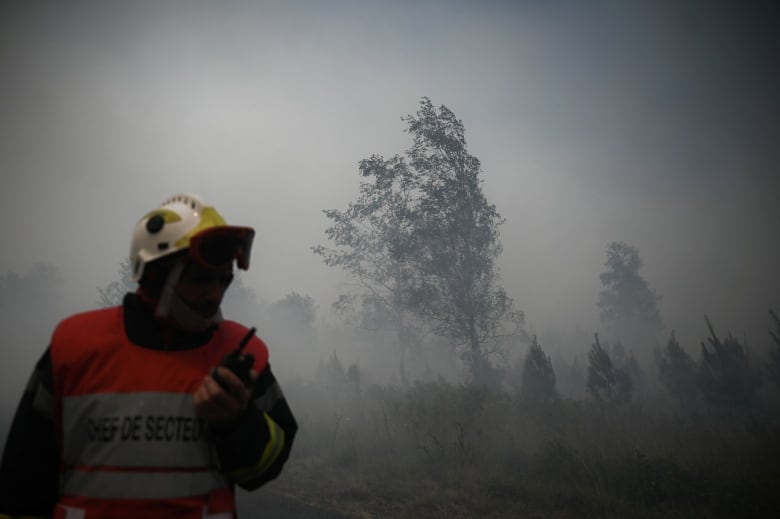 The current18:03Therapists focus on climate fear

As climate change raises temperatures and magnifies the impact of natural disasters around the world, some doctors are trying to find ways to address the impending ecological demise affecting people’s mental and physical health.

“I think one of the things about climate or eco-anxiety that we need to keep in mind is to give people a sense of agency, to make people feel like they can do something about it,” said Dr. Melissa Lem, President-elect. of the Canadian Association of Physicians for the Environment.

Climate fear, also known as eco-fear, is the fear some people feel about the effects of climate change.

Climate psychology consultant Leslie Davenport said most of the patients she sees with these cases are young people.

“High school, early college, early adulthood, this is a natural time in development where people look at ‘Where do I want to live and do I want to raise a family? And what kind of work do I want to do?'” she said.

“It’s kind of a forward-looking time, and a lot of young people feel like their future has been hijacked.”

According to a 2021 study published in the health journal The Lancet, 84 percent of 10,000 respondents aged 16 to 25 were at least moderately concerned about climate change.

More than 45 percent of respondents said their feelings about climate change negatively affected their daily lives and functioning.

We are a long way from delivering the messages and action points needed to protect the public from the threats of air pollution, fossil fuels and climate change.-Dr. Courtney Howard, ER physician

dr. Courtney Howard is an emergency room physician in Yellowknife and co-chair of the World Health Organization’s Civil Society Working Group on Climate Change and Health. She said The Lancet has labeled climate change as the “greatest global health threat of the 21st century”.

That’s why she thinks it’s important that medical professionals like herself take cases of climate anxiety seriously.

“This is a feeling people have that is absolutely normal in response to a threat we all share.”

According to Howard, one of the first steps to addressing climate anxiety is to help medical professionals better understand the real health threat of climate change.

“I see my own profession as essentially dropping the ball to a great extent, and at the moment we are catching up,” she said.

Despite teaching countless medical students every year, Howard said medical schools around the world have been “extremely slow” in introducing climate change into curricula.

One study found that of the 2,817 medical schools in 112 countries, 15 percent of them have recorded the effects of climate change on health.

In addition, 11 percent of the medical schools studied had formal education about air pollution and health.

“Air pollution itself, according to the World Health Organizationkills seven million people a year worldwide,” Howard said.Tobacco kills eight million. So, even if we’re just looking at air pollution, we’re talking about a threat that kills nearly as many people [as] tobacco.”

“We are a long way from delivering the messages and action points needed to protect the public from the threats of air pollution, fossil fuels and climate change.”

Leslie Davenport, a climate psychology consultant, said one of the first things a clinician should do is validate a patient’s concerns and address them where they are.

But there is a “problematic” lack of climate training in the mental health field, and thus a lack of validation for the patient’s fears, she said.

As a result, “a person can come in with very well-founded concerns … and the therapist, who is just part of the mix of the larger population without any training or context for it, might put it back on the client,” Davenport told me. The current.

LISTENING | How will the climate crisis affect your children’s health?

One way some doctors are trying to validate their patients’ concerns about climate anxiety is by prescribing nature itself.

General Practitioner Dr. Melissa Lem is also the director of PaRx, which she describes as “Canada’s national conservation initiative”. She said any regulated health professional in Canada can sign up for the program and they will receive an updated natural prescription file and resources on how to effectively prescribe wildlife.

“It’s a process of working with a patient to find out their strengths, interests, abilities and what nature is like in their local environment, and then literally prescribe nature to them,” she said.

Lem said the program has a standardized recommendation that people spend at least two hours in nature each week, with each session lasting at least 20 minutes.

She said this is based on evidence of increased well-being and health after two hoursand an efficient decrease in the stress hormone cortisol between the 20 and 30 minute markers.

Howard said the idea is great, adding that the prescription could be “permission” for patients to take better care of themselves by spending more time in nature.

It is also a good reminder for the doctors who prescribe them.

“When we think about the amount of burnout we see in the health professions, I think it’s probably a good thing for doctors to write prescriptions for nature for their patients, too, because it kind of sends a message to themselves. that she should probably also take the time to start taking care of herself in nature,” she said.

Kremlin’s mention of possible use of nuclear weapons ‘absolutely unacceptable’ –...