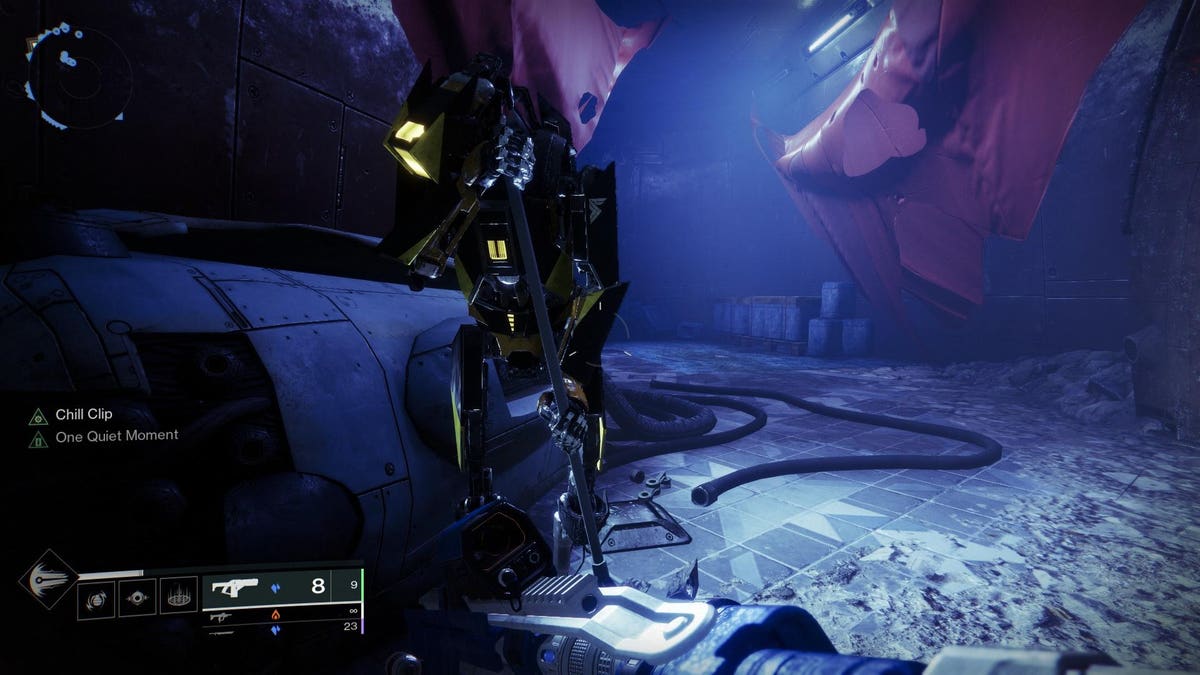 Now that Destiny 2 players can donate alternative currency to the new community event “rebuild the Eliksni neighborhood”, the pace of completion is flying, and it seems that it should all be done in a day or two instead of two weeks. It’s a rare one underestimate of how quickly things would get done, whereas previously community event goals had to be lowered.

But as the event takes shape, Destiny 2 also seems to be using it to possibly hint at what’s to come next season, where before that we’ve gotten no real indications about the final season’s story leading up to Lightfall.

1) After the first stage of completing the “remove debris” event, the game added some Sweeper Bots around the neighborhood, but these are not regular Sweeper Bots. They are Seraph frames from Season of the Worthy, stamped with Rasputin’s emblem, which doesn’t seem like an accident.

2) The decal for the event has pixels that translate into binary code. That code describes “The Copper Scroll,” one of the Dead Sea Scrolls that was basically a treasure map:

“The text is an inventory of 64 locations; 63 of them are treasures of gold and silver, estimated in tons. For example, a single location described on the copper scroll describes 900 talents (868,000 troy ounces) of buried gold. Tithe barrels are also listed among the entries, along with other barrels, and three locations contain scrolls. One entry apparently mentions priestly vestments. The final list points to a duplicate document with additional details. That other document was not found.”

Binary code seems like another inherent Rasputin hint given that he’s an AI, though I’m not sure the reference to the Copper Scroll treasure list is a metaphor for Neomuna, the hidden Neptune colony of which apparently only Rasputin and Savathun belong have knowledge. or if it’s just… a joke about Season of Plunder and all its treasures. But a common thought was that Rasputin would be the one to give us the knowledge about Neomuna, given a revelation in The Witch Queen that he knew about a secret human colony called NEPHELE STRONGHOLD that no one else had ever heard of.

Also, it’s just… time for Rasputin to reappear in the story. He’s been off the board since Beyond Light, when the Pyramids shut him down like a light switch and he was forced to evacuate Mars in an engram with Ana Bray. Ana has kind of built him a super exo body, and maybe next season will finally be time for that to come to fruition. I don’t know why else we would see these references so close to next season.

The next two community event unlocks, a revamped bar and some old junk from Spider appearing behind the bar, don’t seem to have any Rasputin clues in them, but of course I’ll keep hunting for more. The current pace indicates that this whole thing should take a few days at the most, and maybe then we’ll have more answers.

From ‘Stranger Things’ to ‘Wednesday’ to ‘Dahmer’, Netflix Has a Monster 2022

Did Amazon steal Mike Flanagan from Netflix to make a ‘Dark Tower’ series?

How to Unlock Ramattra in ‘Overwatch 2’ Season 2

The President of the State receives leaders of international space agencies...

The death of a Kansas City kid whose body was held...