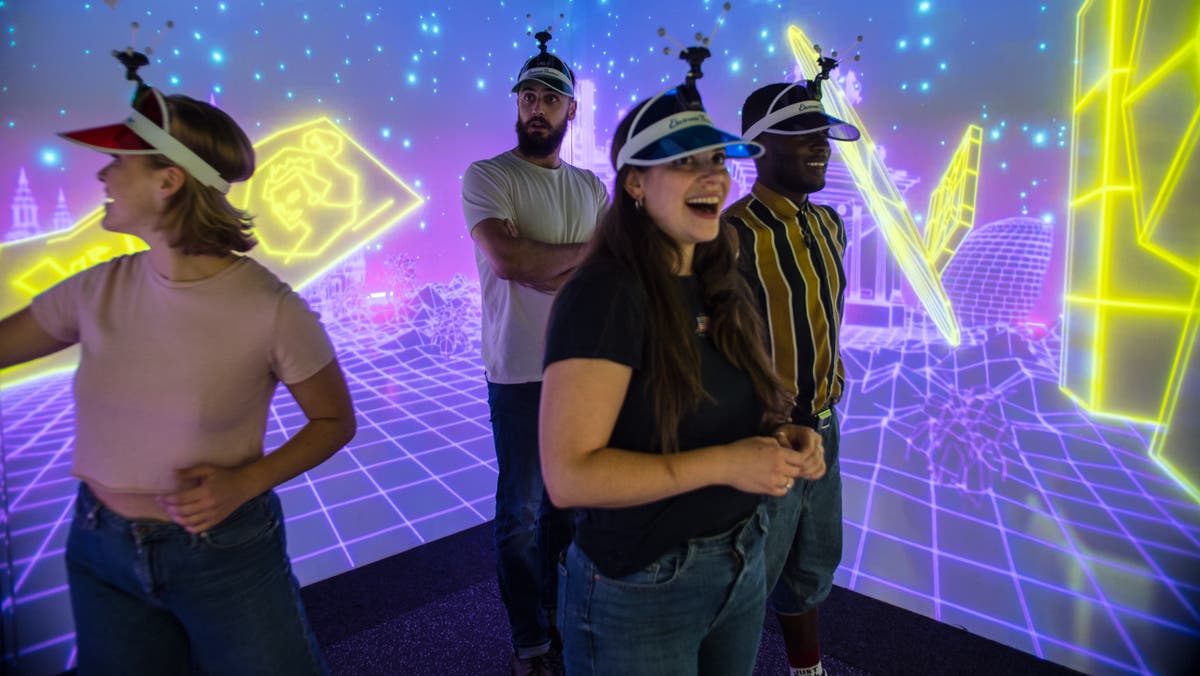 Next week, Zoom’s London team will be visiting the startup’s flagship site in Southwark for in-person liaison time. “I thought that was the ultimate irony,” Dean says, with a wry laugh.

When you walk through the venue gate under Southwark’s railway arches, there is nothing to suggest that it was the idea of ​​the person who slid the corporate teams through the mud and jump into tubs of ice together.

But Dean explains that the startup’s mission is to create a shared experience where screens act as facilitators, rather than a more solo experience where you plug into a VR headset and play side-by-side.

A one-hour session costs £ 25 per person per hour at peak times, with off-peak sessions starting at £ 5, and the games are intentionally easy to allow bachelorette parties to enjoy after having had a few drinks. Dean is keen to point out that over 70% of tickets are sold to women, and says UK sites have been buzzing since reopening with full bookings during mid-May.

The 40-year-old entrepreneur, whose first job was working in counterterrorism for the Foreign Office, founded Tough Mudder with his boarding school friend Guy Livingstone in America in 2010. He quit following disputes before Tough Mudder plunged into administration early last year. , and sold its shares before the company was sold to a major US competitor, Spartan Race, in a deal approved by a US federal court in late February 2020.

After quitting, Dean returned to Britain and wanted to create something new. He teamed up with co-founder, CFO and other Tough Mudder veteran David Spindler to launch Electronic Theater, which they quickly renamed Electric Gamebox because it “better described the experience.”

“Why did I do this? I think you have to start with “why a second business?” Because the first time you can be accused of recklessness, you don’t know what you’re getting yourself into. The second time you do it, ”Dean says over coffee in London.

“I was in my thirties and wanted to do something else. I’ve seen a lot of successful entrepreneurs who are like “I’m Steve Jobs” or “I’m Elon Musk” and then they try to do something completely different and it doesn’t work. You have to try to avoid the problem of the second album.

“I wanted to do something that builds on what I’ve done, something that is always interesting enough to be fun and that makes a little difference, and something that I could genuinely base in London that would be a global opportunity. ”

The startup was launched in October 2019 and raised an additional £ 8.5million just before the competitive socialization industry, which was growing rapidly before Covid, was put on hiatus for more than a year. But Dean says that while it was “frustrating,” it gave the team time to hone their technology and develop better games.

Today Electric Gamebox has a few locations scattered across the UK and one in Dallas, Texas which launched in February with no one on the team flying to the US when Britain was at most. lock three deep.

It has just secured nearly £ 8million in funding to fuel a major expansion in the US and UK from backers such as Index Ventures, Imbiba and investment giant Brookfield Asset Management. . The plan is now to open 100 sites by 2023, and expand to more than 1,000 sites by 2026.

The team just created a game box designed specifically for concessions in retail parks, malls and cinemas, with a transparent front wall for passers-by to have fun inside – and they partnered up with Brookfield to get them to some of the real estate. the giant’s US retail sites.

July will see the franchise-run box debut inside the former Debenhams in Wandsworth – a site currently being developed into a high street destination by Gravity Active Entertainment.

A Harvard Business School graduate when he started this second venture, the entrepreneur wanted to create something that couldn’t be “off a bucket list” – something that would generate repeat income. Dean is also in advanced negotiations with two US movie giants for installation inside their complexes, and plans to partner with game developers to create branded games. The business is on track to be profitable by next year.

“The economy is very good on the units. It helps get a lot of homeowner input up front, ”he says. “The reason Tough Mudder worked is that you think some random stranger just helped me get over an obstacle,” you link. I thought you could take the same ‘team vs. environment’ dynamic, which creates fun, and replicate it here – but here you can change the experience with the push of a button. “

Finding designers who wanted to create a simple game that offered a group experience rather than focusing on creating the most impressive on-screen display was difficult. For Dean, it’s about telling stories through games, and he hired an unusual game content director – a Cambridge Classics graduate who starred in the famous Footlights – the college theater troupe that spawned to Emma Thompson and Hugh Grant.

Dean and the team are currently creating a series of educational games that they plan to offer free to local schools. The first will allow primary school pupils to explore Europe via screens, to learn geography and language skills.

The entrepreneur says a family with a child with the autism spectrum told him that playing the game was the first group activity they had enjoyed doing for years. This allowed him to make sure he had chosen the right second company. “I really believe we’re really using technology for good,” he says.

The Singapore Time - June 25, 2021 0
Welcome to your morning press briefing from The Telegraph - a summary of the main stories we cover on Friday. To receive twice-daily...