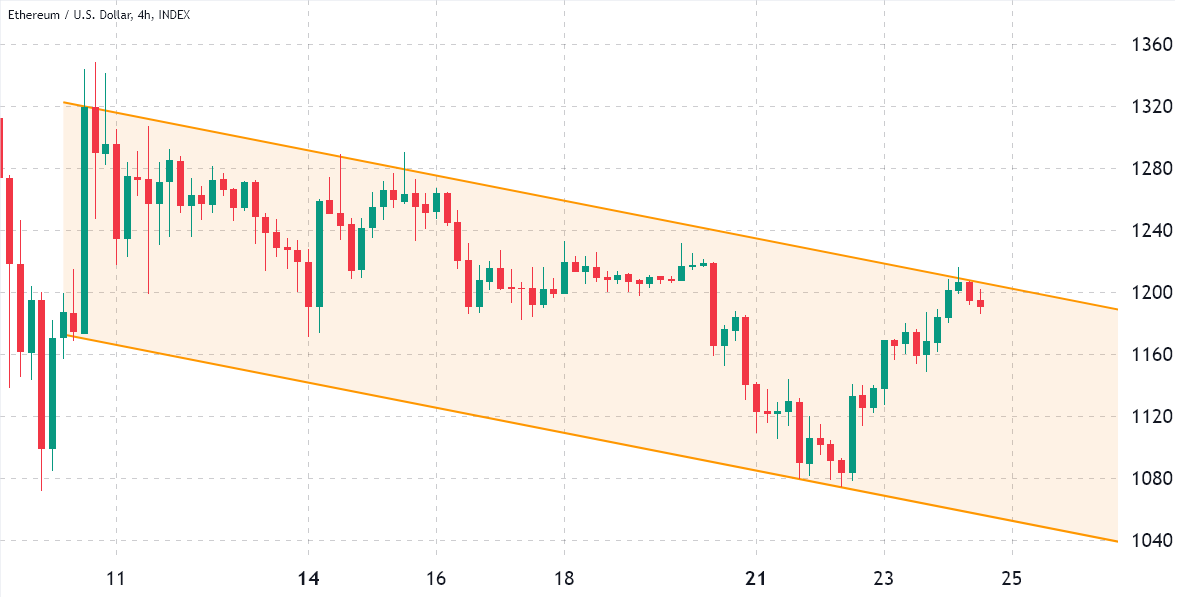 No matter if one analyzes Ether’s (ETH) longer term or weekly time frame, there is little hope for bulls. In addition to the negative performance of 69% year-to-date, a bearish channel has squeezed ETH price as it resisted at $1,200.

Regulatory uncertainty continues to weigh on the industry. For example, Starling, a digital bank based in the United Kingdom, announced on November 22 that it would no longer allow customers to send or receive money from digital asset exchanges or sellers. The bank described cryptocurrencies as “high risk and heavily used for criminal purposes”.

In other worrying news for the Ethereum ecosystem, the decentralized finance (DeFi) platform AAVE suffered a short-seller attack on November 22 aimed at profiting from collateralized lending.

Oddly enough, a similar exploit happened on the Mango Markets DeFi application in October. While not a direct attack on the Ethereum network, the attacker has demonstrated critical flaws in some major decentralized collateral lending applications.

In addition, Singapore-based cryptocurrency lender Hodlnaut is reportedly facing a police investigation over allegations of cheating and fraud. The trouble started on August 8 after the lender cited a liquidity crisis and suspended withdrawals on the platform.

Finally, on Nov. 22, US Senator Elizabeth Warren linked the demise of the FTX exchange to 2008 subprime mortgages and penny stocks used for pump-and-dump schemes. Warren said the collapse of FTX should be a “wake-up call” for regulators to enforce laws on the crypto industry.

That is why the $1.13 billion monthly Ether options expiring November 25 will put a lot of price pressure on the bulls, even though ETH posted 11% gains between November 22 and November 24.

Most of the bullish bets were placed above $1,400

Ether’s rally towards the $1,650 resistance on November 5 signaled the bulls to expect a continuation of the uptrend. This becomes apparent as only 17% of call (buy) options before November 25 are placed below $1,400. Consequently, Ether bears are better positioned for the monthly expiration of the upcoming $1.13 billion options.

A broader view using the call-to-put ratio of 1.44 shows a skew with bullish bets (calls) open interest at $665 million versus the $460 million put (sell) options. Nevertheless, with Ether currently hovering around $1,200, bears are in a dominant position.

For example, if the Ether price remains below $1,250 at 8:00 UTC on November 25, only $40 million of these call (buy) options will be available. This difference arises because it makes no sense to buy Ether at $1,250 or $1,500 if it trades below that level on expiration.

Bears could pocket a $215 million profit

Below are the four most likely scenarios based on the current price action. The number of option contracts available on November 25 for call (bull) and put (bear) instruments varies depending on the expiration price. The imbalance in favor of each side constitutes the theoretical gain:

This rough estimate takes into account the call options used in bullish bets and the put options used exclusively in neutral-to-bearish trades. Yet this oversimplification overlooks more complex investment strategies.

Ki Young Ju, the co-founder of blockchain analytics firm Cryptoquant, verified the findings, noting that 0.6% of the money was sent to exchanges and may represent sell-side liquidity.

If bears dominate monthly ETH options in November, that will likely add more firepower for further downside bets. So at this point, there is no evidence that bulls can turn the tables and avoid the pressures of the two-week descending triangle.

The views, thoughts and opinions expressed here are those of the authors only and do not necessarily reflect or represent the views and opinions of TSTIME.

Coinbase FY2022 revenue will be less than half of FY2021 revenue, says Brian Armstrong