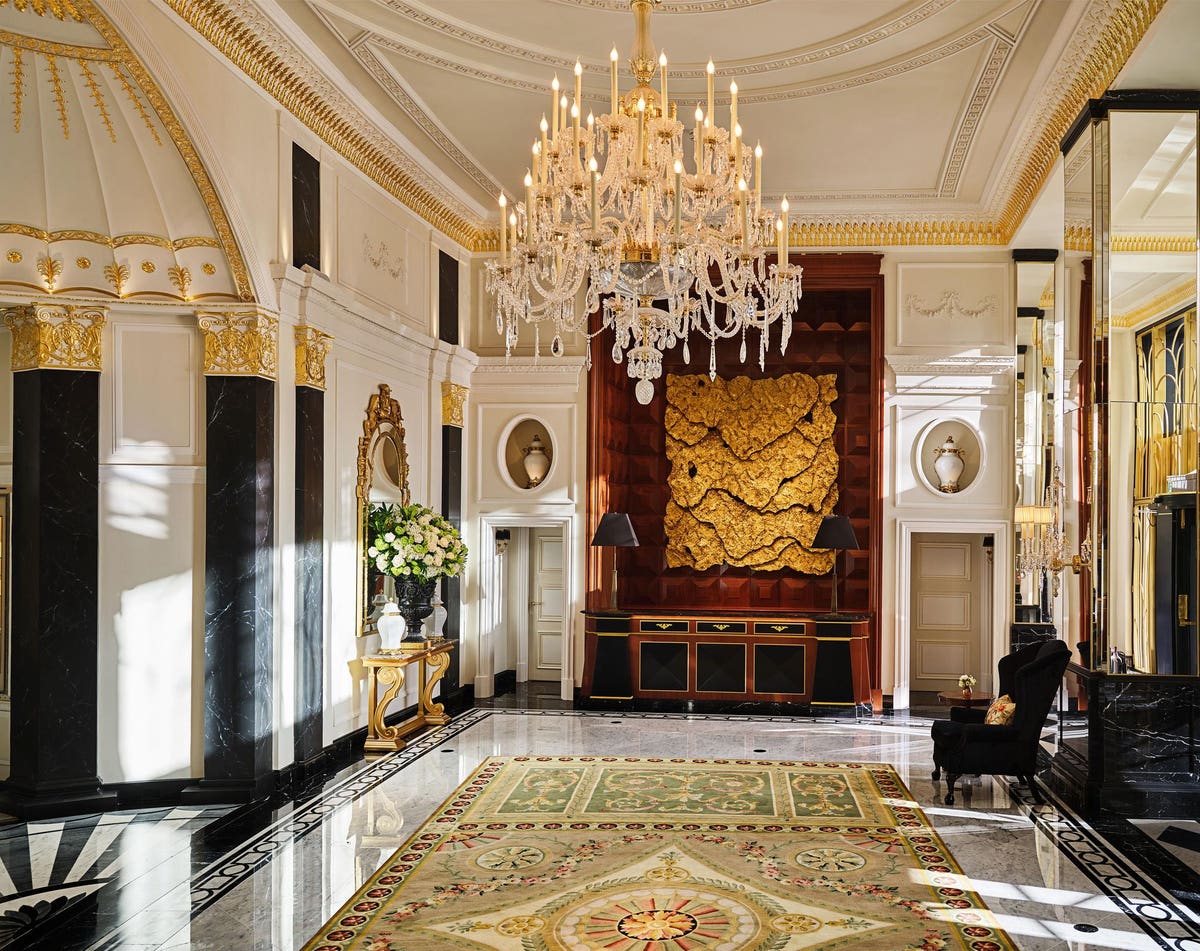 The Dorchester Hotel, a glamorous London landmark loved by royalty and with strong ties to the ‘James Bond’ series, introduced its new look this month. The first major renovation since the ’80s, the Mayfair hotel created a lavish 007-inspired cocktail lounge and added an Artists’ Bar where Liberace’s restored, mirrored wing is a dazzling attention grabber.

Opened in 1931, the Dorchester is undergoing a full refurbishment. The now completed first phase unveiled by the Dorchester includes the forecourt, entrance, lobby, The Promenade and Artists’ Bar.

In addition, the hotel enlisted acclaimed designer Martin Brudnizki to transform its The Bar at The Dorchester into the new James Bond-inspired Vesper Bar, a nod to the 1953 novel ‘Casino Royale’ and a sophisticated place to mix martinis with oysters and lobster tempura.

The Vesper Bar pays homage to The Dorchester’s many connections to James Bond over the years. Bond author Ian Fleming lived and dined at The Dorchester all his life and when William Boyd continued the series with the novel “Solo”, Bond wakes up in a suite at The Dorchester on his 45th birthday. In the 1960s and 1970s, EON, the production company of the ‘James Bond’ films, even had an office in the hotel. Over the decades, The Dorchester has welcomed James Bond cast members.

The Hollywood-style bar’s ornate design includes a 1930s palladium leaf ceiling and a cocktail menu honoring other famous hotel guests, including Elizabeth Taylor who stayed at the hotel 37 times and signed her contract for Cleopatra in a bath at the Harlequin Suite. The Bessie Mae (which was Taylor’s nickname) is a cocktail with “bubbly” on it.

Other revisions include the forecourt, with a green granite underfoot and a landscape garden under the leafy plane tree. The open lobby is flooded with natural light and imposing artwork, such as the molded and gilded overlapping honeycomb layers that artist Sophie Coryndon envisioned for a hanging tapestry. A large oil painting by artist Christian Furr references neighboring Hyde Park and The Serpentine.

The Promenade, the heart and soul of the hotel, has been redesigned by award-winning luxury designer Pierre-Yves Rochon.

The space is flanked by pillars and has delicate white and soft sage green ceilings finished with accents of gold leaf. The Promenade is home to dining traditions, including the hotel’s afternoon tea and dinners that conclude with signature flambéed crêpes served at the table.

An extension of The Promenade, The Artists’ Bar sparkles from every angle with Liberace’s legendary piano matching the mirrored ceiling. Cocktails are served on trolleys and the space doubles as an art gallery, with standout pieces including Ann Carrington’s work inspired by Queen Elizabeth II’s postage stamp. The large-scale silhouette of the late queen is made with mother-of-pearl buttons, sewn individually by hand.

More Dorchester renovations are in the pipeline.

Madeover rooms and suites will debut in March with soft, English-inspired color palettes (think pale leaf green and rosy pink, as well as heather blue and lemon yellow). Also, an upcoming Cake & Flower shoppable boutique will be filled with the sweeter things in life: Cakes and bouquets.

A happy accident: how Spain’s Puerto de Indias made the first strawberry gin