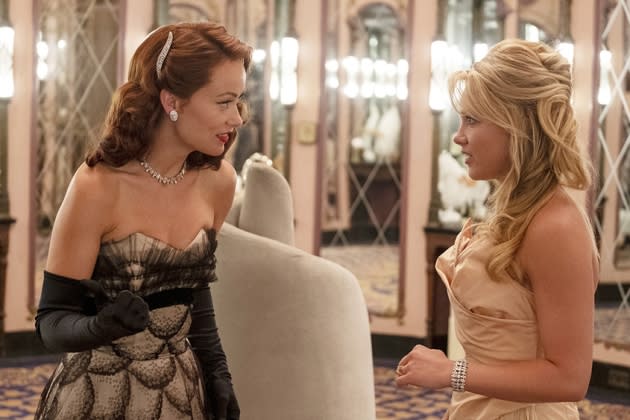 “Don’t Worry Darling” star Florence Pugh took to Instagram to write a heartfelt tribute to the film on its release date, as well as share a group of behind-the-scenes photos from the shoot, including one with director. Olivia Wilde.

“It’s here…and ready to be seen,” Pugh wrote. “@dontworrydarling is in cinemas! We met so many talented people, visited amazing locations, worked hard in the desert dust and looked good in the process. (Thanks to @hebathormakeup and @jaimeleigh.hair and @ariannephillips).

“Thank you to all those who have bought tickets and those who have already seen it – when I watch huge impactful movie moments on huge screens I always remind myself that there is a boom just a few inches from the frame I am looking at. Or marks on the floor just below the actors’ waists. It’s crazy to think that each setup and scene takes a good part of a day to execute, and on this one… a lot had to be done!

“Explosions, car chases, cocktail balancing, underwater sequences, run, drink, run some more…
This movie was such an epic story on such a large scale to film, all during the Covid peak times. I will always be grateful to you for that. To everyone who helped make this, your dedication and love was seen on a daily basis – thank you.

“With that, here are some photos I took from this time. More to come! #dontworrydarling.”

Despite rumors of Pugh and Wilde arguing on the set of ‘Darling’, the latter denied any friction in her Variety cover story.

“We were all brought so close by the production bubble,” Wilde said, praising Pugh and… [co-star Harry] Styles as acting partners. “She was really a big believer in him as someone newer on a movie set. And he was such a big supporter of her, as someone who understood it was her movie.”

See Pugh’s full post below, which she soon followed with another group of photos.