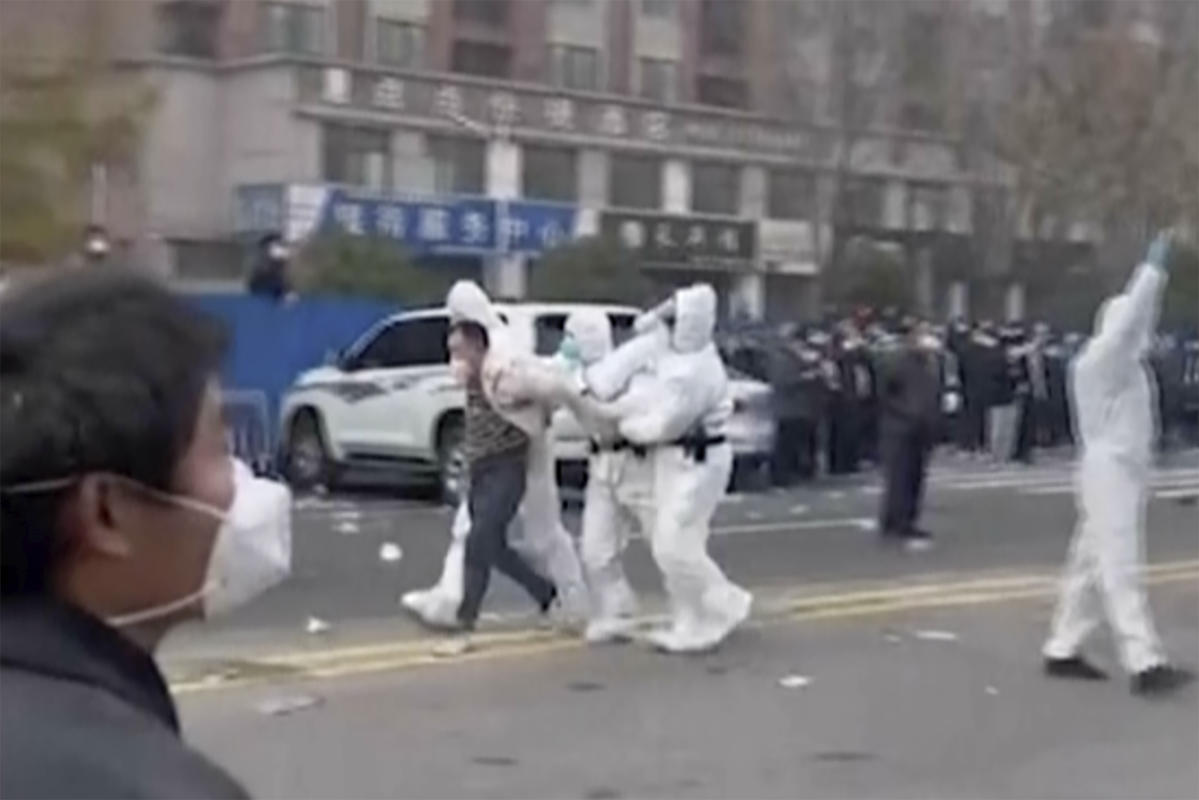 BEIJING (TSTIME) — The company that makes Apple Inc.’s iPhones. assembles, apologized on Thursday for a wage dispute that sparked worker protests at a factory where anti-virus controls have slowed production.

Workers complained that Foxconn Technology Group had changed the wage terms offered to lure them to the factory in the central city of Zhengzhou. Foxconn is trying to rebuild its workforce after employees walked out last month over complaints of unsafe conditions.

Videos posted on social media showed police officers in white protective suits kicking and clubbing workers during the protest that erupted Tuesday and continued into the following day.

Foxconn, the largest contract fitter of smartphones and other electronics for Apple and other global brands, blamed a “technical error” in adding new employees, saying they would be paid what they were promised.

“We apologize for an input error in the computer system and guarantee that the actual wages are the same as agreed and on the official recruitment posters,” a company statement said. It pledged to “do its best to actively resolve employee concerns and reasonable demands”.

Late Wednesday night, Apple said it had people on the ground at Foxconn’s Zhengzhou facility.

“We are reviewing the situation and are working closely with Foxconn to ensure that their employees’ concerns are addressed,” the Cupertino, California-based company said.

The dispute comes as the ruling Communist Party tries to contain a surge in coronavirus cases without closing factories, as it did in 2020 at the start of the pandemic. The tactic includes “closed-loop management,” or letting employees live in their workplace with no outside contact.

Authorities last month pledged to ease economic disruption by reducing quarantine times and making other changes to China’s “zero-COVID” strategy, which aims to isolate each case. Despite this, the wave of infection has prompted authorities to suspend access to neighborhoods and factories and close office buildings, shops and restaurants in parts of many cities.

On Thursday, people in eight districts of Zhengzhou with a total population of 6.6 million were told to stay at home for five days. Daily mass testing was ordered for a “war of annihilation” against the virus.

Apple previously warned that iPhone 14 deliveries would be delayed after workers left the Zhengzhou factory and access to the industrial area around the facility was suspended following outbreaks.

To attract new workers, Foxconn offered 25,000 yuan ($3,500) for two months’ work, according to employees, or nearly 50% more than the highest wages usually are, according to news reports.

Workers complained that upon arrival they were told they had to work for another two months at a lower wage to receive the higher wages, said one worker, Li Sanshan.

Foxconn’s statement Thursday said workers who leave will receive unspecified “care subsidies” but gave no details. It promised “all-encompassing support” for those who remain.

The protests in Zhengzhou stem from public frustration over restrictions that have bound millions of people to their homes. Videos posted on social media show residents in some areas tearing down barricades set up to enforce neighborhood closures.

Foxconn, headquartered in New Taipei City, Taiwan, previously denied it was online comments that workers with the virus were living in factory dormitories.

Sally Field on surviving ‘The Flying Nun,’ fighting for ‘Lincoln’ and...

Up to four inches of snow could fall in southern England...