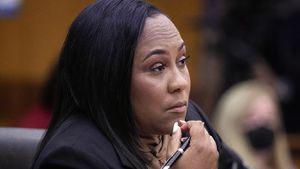 During a court hearing Tuesday afternoon, the Fulton County district attorney hinted she could charge multiple people in connection with the special grand jury’s investigation into possible criminal interference in Georgia’s 2020 election.

Fulton County District Attorney Fani Willis said she didn’t want it released now because it could affect her cases.

Lawyers from WSB-TV and other media argued that Georgia law required the judge to release that report and that the public had a right to know what it contained.

“The state understands the media’s scrutiny and the world’s interest,” Willis argued. “But we must be aware of protecting the rights of future defendants. If that report were released, one way or another arguments could be made that it affects the right of subsequent individuals, several, to due process.”

But WSB-TV attorney Tom Clyde argued there were no other potential defendants in the hearing arguing to keep the report sealed, only the prosecution. He also pointed out that the special grand jurors had specifically asked the judge to release their investigation.

See also  Is the government trying to profit from torture in Guantanamo cases?

“We recognize that the grand jury’s operations, while ongoing, were subject to a shroud of secrecy,” Clyde said. “But that has come to an end and they have released their final report. And the jury members themselves have asked for publication.”

McBurney will have to decide whether a special purpose grand jury is a tool of the justice system or an investigative arm of the district attorney.

That decision will guide him on whether to release the report.

The Singapore Time - February 1, 2023 0
A 5-year-old boy was "viciously attacked" Tuesday night by a mountain lion that pounced on him without any provocation while the child was hiking...

Ted Cruz tells Texans to keep warm, but then they get...