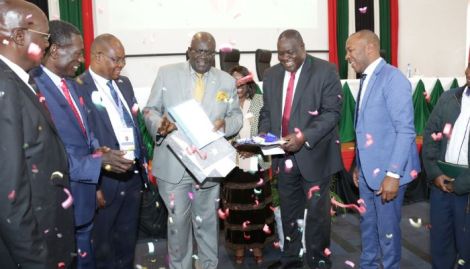 Born in 1952 in Kisumu County, Professor George Albert Omore Magoha is largely known as the no-nonsense consulting surgeon and academic administrator who served as the Cabinet Secretary of Education until 2022.

Magoha will be remembered for many things, including his steadfast leadership at the helm of the Kenya National Examination Council (KNEC).

In 2016, Magoha hinted that he could have given his last speech as KNEC chairman. He was later appointed as Cabinet Secretary for Education by former President Uhuru Kenyatta.

Magoha, who passed away on Tuesday, January 24, will be remembered for many things, especially during his tenure as cabinet secretary.

Former Secretary of the Cabinet of Education, Professor George Magoha (center) during the launch of NEMIS on August 22, 2022

1. The Vice Chancellor of the University of Nairobi

Professor Magoha held various positions at the University of Nairobi including being appointed as President, Death and Director of the College of Health of Sciences.

Magoha was appointed Vice-Chancellor at the University of Nairobi in 2005 after receiving the highest score among applicants.

At the University of Nairobi, Magoha will be remembered for instilling discipline among academic staff, non-teaching staff and students.

Magoha ruled chaotic students and ended the perpetual student strikes that plagued the University of Nairobi for years.

It was during Prof Magoha that UoN Towers was built by the largest Kenyan university.

Magoha retired as Vice-Chancellor of the University of Nairobi and was later appointed as the President of the Kenya National Examination Council (KNEC).

As president of the Kenya National Examination Council, Magoha will be remembered for his widespread reforms that nearly ended cheating on national exams.

Magoha is credited with dismantling cartels that had spent years promoting exam fraud in the Department of Education.

Magoha was nominated by former President Uhuru Kenyatta on March 1, 2019 to serve as the Cabinet Secretary for Education in the Kenyan Cabinet.

He was sworn in on March 26, 2019, replacing Amina Mohamed who was transferred to the Sports role.

At the Ministry of Education, Magoha continued reforms that brought the largest number of students to secondary school.

Magoha initiated the 100 percent transition from primary to secondary education, advocating for education for all.

Under the 100 transition policy, every Kenyan parent or a parent whose child lives in the country must enroll them in primary and secondary education.

Magoha, who had led a multi-sector team in a door-to-door campaign in the Rift Valley region to search for Standard Eight dropouts who had yet to report to high school, publicly reprimanded the education officer for not doing enough to support process.

“And you are coming here for the first time, just stop that nonsense because I won’t take it.

If you want to step down and go into politics, do it now. You have to make sure you’re available in the field because you’re in charge of all the provinces in the Rift Valley unless you’ve delegated that to someone else,” Prof. Magoha. 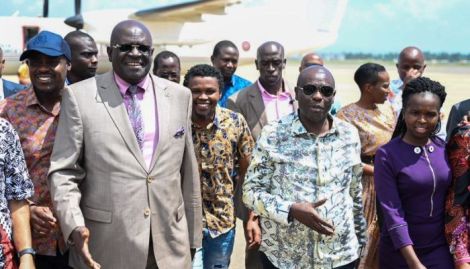