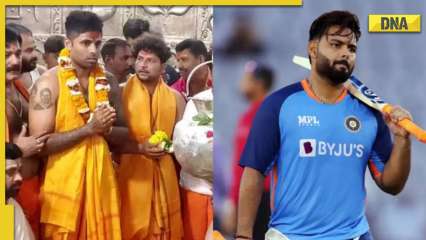 Players from Team India visited the famous Mahakaleshwar Temple in Ujjain ahead of the third ODI against New Zealand. Suryakumar Yadav, Kuldeep Yadav and Washington Sundar were among the members of the Indian contingent who offered their prayers to Mahakal for a speedy recovery of Rishabh Pant.

Pant, who recently underwent knee ligament surgery, was involved in an accident on December 30 on the Delhi-Dehradun highway in which he suffered several serious injuries. He has been in hospital ever since and is expected to be out for the next 4-6 months.

See also  'While choosing the team..': BCCI voter explains why Sarfaraz Khan was not selected for the Australian series

According to a BCCI source, Pant will need counseling sessions in addition to physical rehabilitation. As a result, he is ruled out of the Border-Gavaskar Trophy, the 2023 edition of the IPL, and faces a race against time to be fit for the 2023 ICC Cricket World Cup in October-November.

Speaking to ANI news agency, Surya expressed his hopes for a speedy recovery of Rishabh Pant, noting that his return is of utmost importance for the Indian team. “We pray fervently for Pant’s speedy recovery as his comeback is essential for us. We have already won the series against New Zealand and are eagerly awaiting the final match,” Suryakumar Yadav told ANI.

The players participated in the early morning Bhasma Aarti dressed in traditional clothes. They bowed their heads in reverence in prayer, taking in the spiritual atmosphere of the ceremony.

The Indian team has sealed the three-game streak in spectacular fashion, game in hand, after a sensational performance in the second ODI at Raipur. The Indian bowlers ran rampant, taking New Zealand down to 15/5 at one point, before eventually bowling them out for a meager 108. The batsmen, led by skipper Rohit Sharma’s half century, then chased it down with relative ease.

The Singapore Time - February 3, 2023 0
TEGUCIGALPA (Reuters) - Honduras and the United Nations on Thursday launched a humanitarian aid plan to reach more than 2 million of the most...