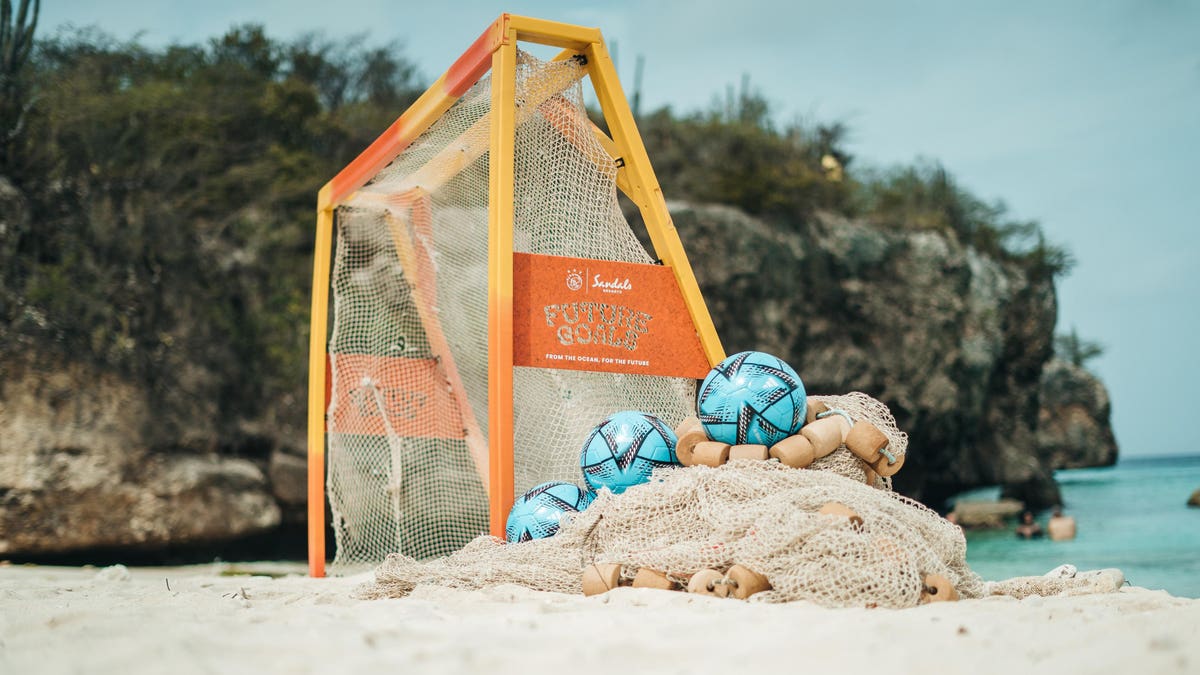 Ghost gear and ghost nets – abandoned and lost fishing gear – kill and injure marine animals, smother coral reefs, pollute coastlines and damage boats. But the Sandals Foundation, in conjunction with the AFC Ajax football club of the Netherlands, has a new program to turn ghost nets into football nets, linked to its 16th resort which has just opened, called Sandals Royal Curacao.

Ghosting gear is a growing problem

According to the Plastic Soup Foundation, the global ghost gear problem is getting worse. In addition to more commercial fishing, the composition of fishing gear has changed since the 1960s. What was once made up largely of natural rope is now made up mostly of nylon, a plastic that does not break down. Pollution from fishing gear injures and kills hundreds of millions of marine animals every year. Ghost gear is a big part of the “plastic soup” floating around in the world’s oceans, causing problems.

Many organizations, such as the Olive Ridley Project and veterinarians at its Turtle Rescue Center on the resort island of Coco Palm Dhuni Kolhu in the Maldives, are working to rehabilitate turtles after they have been injured by ghost gear. . Clearing ghost gear around the world would make a huge difference.

The Sandals Foundation is the philanthropic arm of Sandals Resorts and Beaches Resorts, which has 16 luxury all-inclusive resorts in the Caribbean for adults and three for families. The Foundation has educational, community and environmental initiatives to support development and conservation on the islands where their resorts are located.

Future Goals is the Sandals Foundation’s new program to turn ghost equipment into football nets – called football in the Caribbean – for local children and youth. Started on the island of Curaçao, the program is about to extend to other islands, taking into account the particular situation of these nations.

The Foundation works with AFC Ajax, the professional football club of the Netherlands (Curaçao is a constituent country of the Kingdom of the Netherlands) and with Limpi, a plastic recycling company in Curaçao. Limpi recovers abandoned equipment and plastic waste and recycles it to create football nets. Even the goal net clips are made from recycled plastic bottles.

The new program is the focus of World Oceans Day 2022 for Sandals Resorts due to the all-new Sandals Royal Curacao, which officially opened on June 1, 2022. It is Sandals’ 16th Caribbean resort.

The 351 Curacao Key resort faces west for spectacular sunsets along its 1,500-foot-long white-sand beach. In addition to the usual Sandals activities and amenities, the resort features Sandals’ first two-tier infinity pool, and you can borrow a Dutch bike to explore parts of the 3,000-acre estate.

Choose your room based on the type of view you prefer, space, features like a bathtub, and services like butlers. Beachfront Awa Bungalows feature a private pool overlooking the sea and Kurason Island Suites surround a heart-shaped lagoon pool, as well as pool suites, beachfront suites and more.

Included are entertainment, a wide variety of land and water sports (even scuba diving), plus, for some room categories, a convertible MINI Cooper to explore the island. Wi-Fi in the room and in public areas, airport transfers, gratuities and gratuities are also included, as is Sandals’ 5-star Global Gourmet program.

Sandals is well known for its excellent attention to food and drink (and anyone with special dietary needs) and the new Sandals Royal Curacao has 13 bars, three beachside food trucks and eight restaurants. Several are – so far – only available at the Sandals resort in Curacao. Don’t miss the sweet Dutch stroopwafels and poffertjes and Curaçaon cuisine from the Toteki food truck.

Plus, with Sandals’ new Island Inclusive off-site dining program, select bookings receive a US$250 voucher to use at one of eight local restaurants so you can learn more about the island of Curacao and support its local restaurants. And Sandals also includes round trip transfer to this restaurant.

The Singapore Time - June 25, 2022 0
Kim Kardashian shared a series of photos to her Instagram on Saturday to highlight her friend La La Anthony's 40th birthday. The reality television star,...