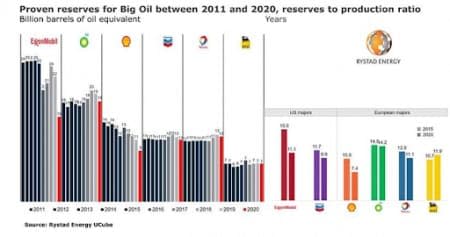 The oil market is currently going through one of the most turbulent times since the infamous meltdown in March 2020, as investors continue to grapple with recession fears. Oil prices continued to fall in the wake of the central bank’s decision to raise the interest rate by a record 75 basis points, with WTI futures for the July settlement listed. at $104.48 a barrel in Wednesday’s intraday session, down 4.8% on the day. and 8.8% below last week’s peak. Meanwhile, Brent crude futures for August settlement were trading down 4% in Wednesday’s session at $110.10 a barrel, 9.4% below the market’s peak. last week.

“Year-to-date, energy is the only sector in the green … but the fact that the bears are going after the winners, so they could drag energy down. The energy sector has pared its 50 DMA upside and now looks lower than the 200 DMA upside, which is currently -9% below last Friday’s close. Crude Oil is sitting on its 50 DMA rise and has a stronger technical pattern,” MKM’s chief market technician, JC O’Hara, wrote in a note to customers.

“Normally, we like to buy pullbacks in uptrends. Our concern at this point in the bear market cycle is that leadership stocks are often the last domino to fall, and so profit taking is the biggest motivator. fight-or-flight mentality currently favors flight, so we would prefer to reduce our positioning in energy stocks and reap some of the outsized gains made after the March 2020 COVID low,” he added.

According to O’Hara’s chart analysis, these energy stocks present the greatest downside risk:

While the bear camp, including the likes of O’Hara, think the rise in oil prices is over, the bulls have held on and view the latest selloff as a temporary anomaly.

In a recent interview, Michael O’Brien, head of Canadian core equities at TD Asset Management, told Kim Parlee of TD Wealth Management that the fundamentals for oil supply and demand remain strong, largely partly thanks to years of underinvestment by both private producers and NOCs.

You can blame ESG – along with expectations of a low oil price environment for longer over the past couple of years – for weighing on capital spending by exploration and production (E&P) companies. Indeed, actual and announced investment cuts have fallen below the minimum levels required to offset depletion, let alone meet any expected growth. Oil and gas spending has fallen off a cliff since peaking in 2014, with global spending by exploration and production (E&P) companies bottoming out in 2020 to a 13-year low of just $450 billion.

See also  Should you buy, sell or hold intuitive surgical stocks around $200?

Even with higher oil prices, energy companies are only gradually increasing their capital spending, with the majority preferring to return excess cash to shareholders in the form of dividends and share buybacks. Others like BP Plc. (NYSE: BP) and Shell Plc. (NYSE:SHEL) have already committed to long-term production cuts and will struggle to reverse course.

Norwegian energy consultancy Rystad Energy has warned that Big Oil could see its proven reserves run out in less than 15 years as the volumes produced are not fully replaced by new discoveries.

According to Rystad, the proven oil and gas reserves of the so-called big oil companies, namely ExxonMobil (NYSE: XOM), BP Plc., Shell, Chevron (NYSE: CLC), TotalEnergies (NYSE: TTE), and Eni SpA (NYSE:E) are all down as volumes produced are not fully replaced by new discoveries.

The main culprit: the rapid decline in investment in exploration.

Global oil and gas companies have cut capital spending by 34% in 2020 in response to falling demand and investors growing wary of the sector’s still poor returns.

ExxonMobil, whose proven reserves fell by 7 billion boe in 2020, or 30%, from 2019 levels, was hit the hardest after deep cuts at Canadian oil sands and U.S. shale gas properties.

Shell, meanwhile, saw its proven reserves fall by 20% to 9 billion boe last year; Chevron lost 2 billion boe of proved reserves due to impairment charges, while BP lost 1 boe. Only Total and Eni have avoided proven reserve reductions over the past decade.

The result? The U.S. shale industry has only managed to increase 2022 crude production by 800,000 bpd, while OPEC has consistently struggled to meet its targets. In fact, the situation has gotten so bad for the 13 countries that make up the cartel that OPEC+ produced 2.695 million barrels per day below its crude oil targets in the month of May.

Exxon CEO Darren Woods has predicted rough markets will remain tight for up to five years, with time needed for companies to “catch up” with the investments needed to ensure supply can meet demand.

“Supply will remain tight and continue to support high oil prices. The norm for ICE Brent is still around the $120/bbl mark,” PVM analyst Stephen Brennock told Reuters after the latest crude sale.

In other words, the rise in oil prices may be far from over and the latest correction may offer new entry points for investors.

Swiss credit Energy analyst Manav Gupta weighed in on stocks most exposed to oil and gas prices. You can find them here.

In the meantime, you can find some of the cheapest oil and gas stocks here.

By Alex Kimani for Oilprice.com

Read this article on OilPrice.com

Home sellers realize this is no longer their housing market

Believe it or not, gasoline prices fell slightly this July 4th – here’s why

The Singapore Time - July 3, 2022 0
Akron police shot unarmed 25-year-old Jayland Walker dozens of times after he fled a traffic stop and led officers into a car and then...

Car insurance: For a smooth ride during the monsoon