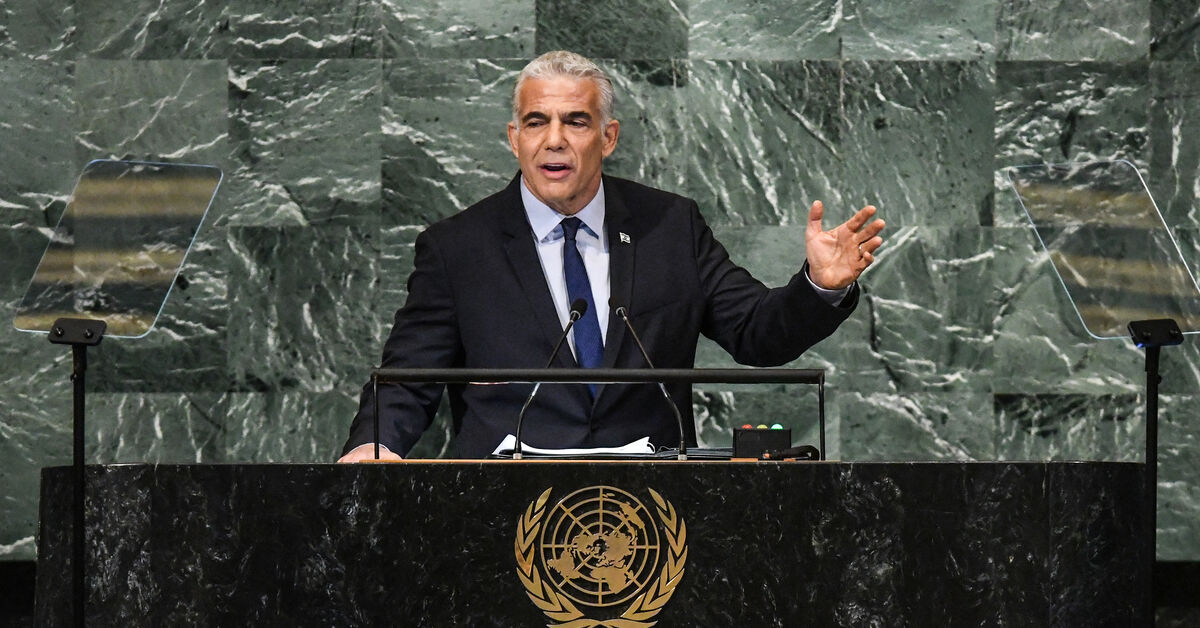 At the United Nations General Assembly on September 22, Israeli Prime Minister Yair Lapid once again brought the two-state solution center stage. “Despite all the obstacles, a large majority of Israelis today still support the vision of this two-state solution. I’m one of them,” said Lapid.

Although the stage and audience were international, Lapid’s words were aimed at Israeli public opinion. In fact, it was more than a diplomatic speech, it was a political speech at the height of an election campaign. Clearly, the speech should enable Lapid to take on the mantle of Israel’s center-left leader, and the bloc’s candidate for the role of prime minister.

In more detail, this move was primarily intended to draw voters away from Defense Secretary Benny Gantz, chairman of the National Unity party, and to hurt his campaign for prime minister.

Indeed, the two are competing for the role within the center-left bloc. This is why neither Gantz nor any members of his party publicly responded to Lapid’s speech. Gantz, of course, could not criticize a view he shares, as could the third candidate on his party list, former chief of staff Gadi Eizenkot. But for now, he preferred to ignore Lapid, who had set him up for a trap.

In that regard, Gantz has cause for concern. Lapid heads the largest party in the bloc, while Gantz has failed to rise in the polls and has actually weakened. Its clear stance on supporting the two-state solution may increase its power, as it will be interpreted in the center-left camp as “courageous” and as a sign of leadership.

See also  WATCH: Ramaphosa arrives in Washington ahead of meeting with Biden

Unlike Gantz, the left-wing parties in his camp praised Lapid.

President of the Labor Party Meirav Michaelic congratulated Lapid “for a Zionist speech on the United Nations stage tonight, which is important and strategic for the State of Israel. The Labor Party will continue to support and promote Israel’s interest in a diplomatic agreement that will ensure Israel’s continued prosperity and Israel’s future as a Jewish and democratic state.”

President of the left Meretz Zehava Gal-On called the speech “historic” and said that “Meretz will stand on Lapid’s left to turn him from a vision into a reality.”

Leading those who attacked Lapid was opposition leader Benjamin Netanyahu, who accused Lapid of actions that would jeopardize the security future of the State of Israel.

“A speech that is all weakness, defeat and surrender,” Netanyahu said of Lapid in a recorded response. “After the right-wing government led by me removed the Palestinian state from the world agenda, after we signed four historic peace agreements with Arab countries that circumvented the Palestinian veto, Lapid is bringing Palestinians back to the forefront of the world stage and putting Israel right Palestinian hole.”

Netanyahu, in the throes of his campaign to return to the prime minister’s office, used Lapid’s move to consolidate support from right-wing voters who truly fear the two-state vision.

Chairman of the right-wing religious Zionist party Bezalel Smotrich continued Netanyahu’s line, saying Lapid’s words “cover up a shameful surrender to terrorism and a drive to divide the land, give away territories and drive thousands of Jews from their homes.” .”

He noted: “Lapid and Gantz brought the Palestinian Authority back to the center of discourse and the international scene, put hope in the sails of Palestinian nationalism, and the citizens of Israel are already feeling the results in waves of terrorism and a dangerous escalation in Judea and Samaria [West Bank].”

Criticism of Lapid has also come from representatives of the right within the coalition. Home Secretary Ayelet Shaked tweeted: “Yair Lapid speaks only for itself when he supports a Palestinian state. This is just an election stunt. We will never allow the creation of a Palestinian terror state in the heart of the Land of Israel. Such a state would be a hotbed of extremism, terror and regional instability.”

Shaked, the chairman of the Jewish House party, is doing poorly in the polls and has tried, it seems, to stir up her potential voter base through this response. She recently said she regretted being in the current government and that she will support Netanyahu after the November 1 elections.

Deputy Prime Minister Naftali Bennett was against Lapid even before his speech. A day before the speech, Bennett posted on Facebook: “There is no place or logic to put forward the idea of ​​a Palestinian state.” According to him, when he was prime minister, he took care of it “not to fight with the whole world for no reason, but also not to capitulate for no reason”.

Lapid certainly expected all these internal Israeli reactions. Still, he chose to use the speech at the UN to present a leadership vision. The esteemed setting and his meetings with leaders such as Turkish President Recep Tayyip Erdogan and Jordanian King Abdullah have enabled him to present his position as Prime Minister of Israel. The speech he delivered in good English added to his image as someone who behaves with ease on the world stage.

The center-left voter base believes in the two-stage idea and Lapid, who once winked to the right, has adopted the central idea of ​​this camp. This, as noted, hurts Gantz, but also Michaeli who has presented himself as the successor of [late] Prime Minister Yitzchok Rabin.

It is estimated that Lapid hopes above all to shake up the Arab voting public, which, according to all polls, is frustrated and disappointed and has no intention of mass voting. The lower the Arab vote rates, the better Netanyahu’s chances of winning 61 mandates and returning to the prime minister’s office. So it is important for Lapid to send a message to Israeli Arabs that he is their leader and that he is striving to integrate Israeli Arabs into society in politics.

It is too early to know whether Lapid’s message was well accepted by Arab voters. On the other hand, Arab Knesset members choose to act aloof. The Hadash Language Party said: “While Lapid’s speech began with warmongering and propaganda, it ended with a call to resolve the two-state crisis. If we stream to the polls, we are in a position to force him to keep his word and work towards establishing a Palestinian state alongside Israel.”

Meanwhile, polls released on Sept. 22 point to gains for Netanyahu and the right-wing and ultra-Orthodox blocs.

Anderlecht vs West Ham livestream: How do you watch a match...