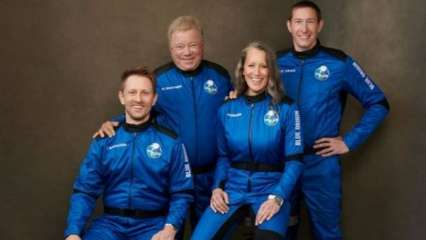 According to Variety, Chris Boshuizen, former NASA engineer and co-founder of Planet Labs, was also on board the second Blue Origin flight; Glen de Vries, the co-founder of Medidata; and Audrey Power, vice president of mission and flight operations at Blue Origin.

The shuttle took off from Launch Site One in Texas, taking its passengers 62 miles above the Earth’s surface and beyond the Karman Line, the border between Earth’s atmosphere and outer space. atmospheric. Shatner and the crew will experience approximately four minutes of weightlessness aboard the shuttle.

The flight was originally scheduled to take off on Tuesday, but was delayed a few days ago due to bad weather and high winds.

Blue Origin’s first space expedition took place in July, with Bezos, his brother Mark Bezos, aviator Wally Funk and Oliver Daeman, the youngest person to enter space, aboard the reusable spacecraft funded by private funds. Funk previously held the record for the oldest person to go to space, at 82.

Shatner is best known for playing Captain James T Kirk in “Star Trek,” which originated the role 55 years ago on television.

“I’m going into space, I don’t know how many people can say that. It’s life changing in its own way,” Shatner said in a promotional video.

“Not because of the aerial adventure, but because of the people I meet and talk to … We are only at the beginning, but how miraculous this beginning is. How extraordinary it is. to be part of this beginning. There lies this mystique of being in space, much closer to the stars and in zero gravity. I will be fascinated by the sight of space, “he added.