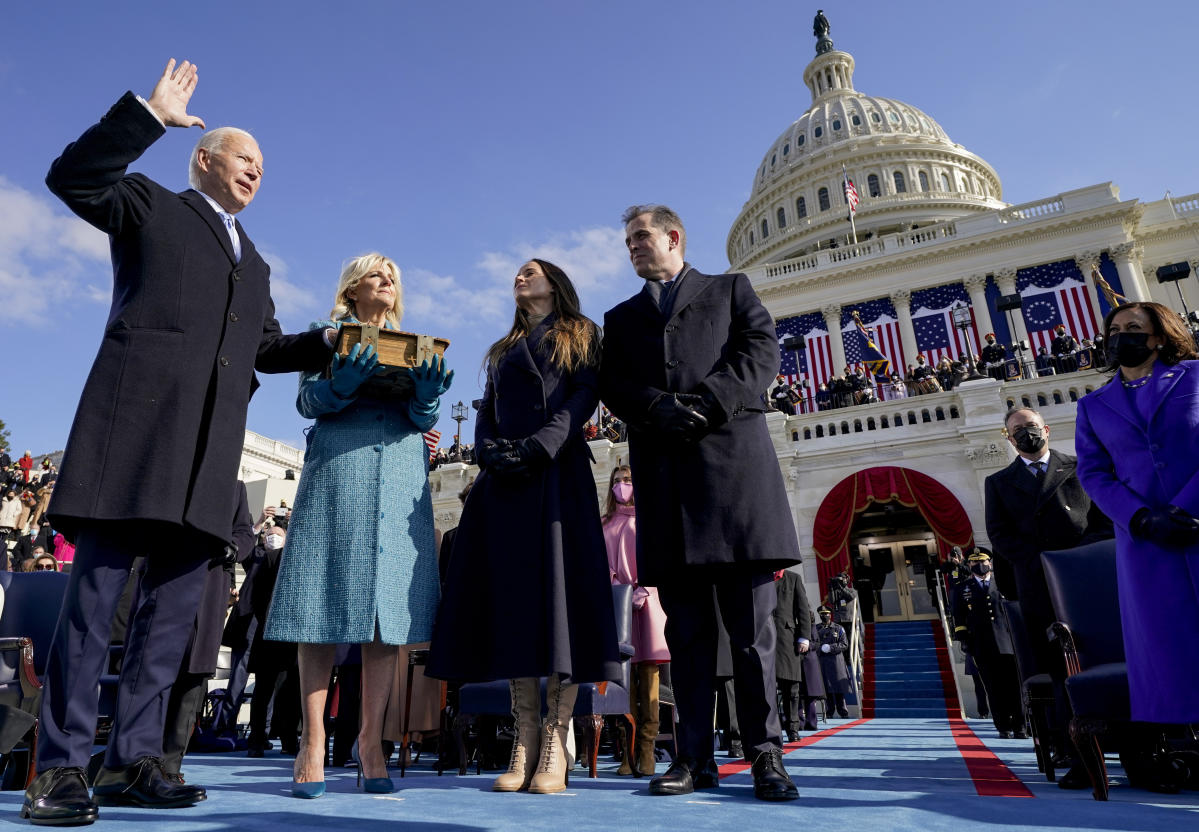 The first lady is donating the ocean blue tweed dress and matching coat she wore to her husband’s presidential inauguration at the Capitol on Jan. 20, 2021, along with the ivory silk wool dress and cashmere coat she wore at the White House later that evening.

Usually, first ladies don the dress they danced in at celebratory balls after the swearing-in ceremony, but there were no inaugural balls for President Joe Biden. He took office at the height of the COVID-19 pandemic, when large indoor gatherings were discouraged.

As a nod to the historic nature of Joe Biden’s swearing-in, Jill Biden’s matching face masks will also become part of The First Ladies Collection at the National Museum of American History.

Her clothes will be formally added to the collection of clothes worn by her predecessors, including Jacqueline Kennedy, Laura Bush, Michelle Obama, Melania Trump and others, at a ceremony Wednesday with the first lady, her fashion designers and museum officials. The museum will reopen to the public on Thursday.

It will be Jill Biden’s first public appearance since January 11, when doctors removed a cancerous tumor from her face and another from her chest.

“Since Helen Taft in 1912, every first lady who has been approached and has an inaugural gown has donated it,” said Lisa Kathleen Graddy, curator of American political history at the museum.

The museum is “always interested” in having both the day and evening outfit, if possible, because “it allows us to show a different aspect of the day and the participation of the first lady” at the inauguration, she said in a telephone interview on Tuesday.

“We’re very lucky to have the space to exhibit both of them in this particular case,” Graddy said.

Joe Biden’s inaugural festivities were changed by the pandemic. People were not allowed to gather en masse on the National Mall to watch him take the oath of office. A traditional luncheon at the Capitol afterwards was canceled and the usual parade down Pennsylvania Avenue was replaced with a virtual one. In the evening, actor Tom Hanks organized a television concert with performances by various musical artists. Biden and his family then watched fireworks from a White House balcony.

See also  After a river of revelations, Prince Harry's memoir lands in the UK

For the ceremony at the Capitol, Jill Biden chose an ocean blue wool tweed tapered dress embellished with pearls and crystals, a matching overcoat with a dark blue velvet collar and cuffs, and a face mask. They were designed by Alexandra O’Neill, founder and designer of Markarian.

At night, she donned an ivory silk wool dress, an ivory double-breasted cashmere coat, and a face mask, all embroidered with the flowers of each U.S. state and territory. They are designed by Gabriela Hearst, founder and creative director of Gabriela Hearst.

The Smithsonian says its first ladies exhibit is one of its most popular attractions. It currently contains 10 inaugural gowns. The wider collection, meanwhile, includes some 1,000 items, ranging from inaugural gowns and other gowns to personal belongings and other White House memorabilia.