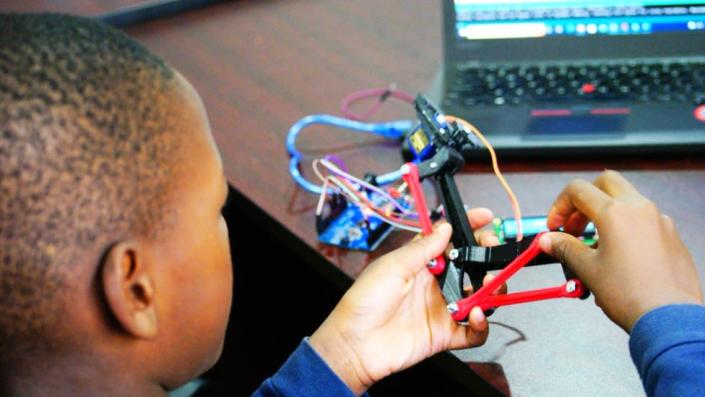 In our series of letters from African journalists, Ismail Einashe goes on technical classes in Kenya.

On a balmy morning in Nairobi, a group of children build robots using motors and wires, while in an adjacent room a child learns to use software to spell their name on a computer.

This hive of tech activity takes place at the headquarters of the Stem Impact Centre, a two-storey bungalow in the center of the Kenyan capital.

Founded in September 2020, the center supports schools by empowering their students to learn coding and robotics and take a DIY approach to technology learning.

The center is the brainchild of Alex Magu, who founded it, driven by a passion to “democratize” “computer science” in Kenya.

He believes it is essential for Kenya’s development to provide every child with access to technology-based resources.

And it seems that the Kenyan government agrees with him.

In April, it announced it would implement a new technology curriculum for primary and secondary schools that will teach coding and technical skills.

Kenya has long been known as one of Africa’s biggest tech hubs and is often referred to as the “Silicon Savannah” as many global tech giants have settled here, including Amazon and Google.

Magu’s own passion for computer science was sparked in his teens.

He was doing poorly in school, so to motivate him, his father promised to buy him something.

Mr. Magu really wanted a mountain bike, but in the end he opted for a computer, a hulking Compaq from the early 2000s.

Playing games on it was a revelation and that night he didn’t sleep at all.

At the age of 13, he decided that he wanted to study computer science at university.

But at school, he didn’t see the connection between physics and computer science, so he dropped the subject.

“I almost collapsed when I got the shock of my life that I couldn’t study computer science at university without physics,” he said.

This experience taught him the importance of instilling passion for science and mathematics in children from an early age.

He ended up studying political science, although he spent his spare time learning about electronics – and after graduating, he worked as a project assistant for a Danish technology company in Nairobi.

It was during this period that he honed his skills and participated in a pilot school program on coding and robotics that inspired him to found his center.

Kenya’s tech scene is often associated with foreigners, who run the most start-ups and attract the most funding.

His center acts as an incubator for local tech start-ups. These include a digital marketing company in Turkana, a new group that burns waste and uses water hyacinths to make electricity in Kisumu, and an artificial intelligence (AI) company that makes translation apps for the deaf in Nairobi.

Some of them are based in Stem and some of their employees also act as mentors for the children.

One of them is John, a recent graduate and research engineer – whose name has been changed due to the sensibility of some of his work.

His family fled the conflict in South Sudan and he was born in the Kakuma refugee camp in northwestern Kenya.

When he was about five years old, his family moved out of the camp to Nakuru, a town in Kenya’s Rift Valley.

His father couldn’t afford to send him and his sister to college at the same time – so while his sister was studying, he managed to convince his father to give him his laptop.

John bought himself a portable dongle and would buy internet packs for around 50 Kenyan shillings ($0.40, £0.35) for 24 hours to go online.

He soon came across a free online computer science course offered by the Massachusetts Institute of Technology (MIT) in the US.

He spent his nights downloading the course and spent his days learning everything from computational thinking and data science to software.

John has never had direct contact with MIT nor has he obtained a certificate, but this course deepened his interest in science and mathematics. When he finally entered college, he studied for a degree in aeronautical engineering.

At the beginning of 2021, a classmate of his started working at the Stem Impact Center. Intrigued by the work they were doing, he asked the friend to take him there – and he ended up doing his internship there before getting a job at one of the start-ups after graduation.

He is excited about passing on his passion for technology to the young students – and his ideas that can help tackle problems in rural areas such as locust plagues.

Inspired by the success of John and others, Mr. Magu is looking at opportunities to expand his program and is currently piloting in Sudan, with support from a refugee charity working in the region.

For John, his future ambitions are crystal clear: he wants to study applied mathematics at MIT.