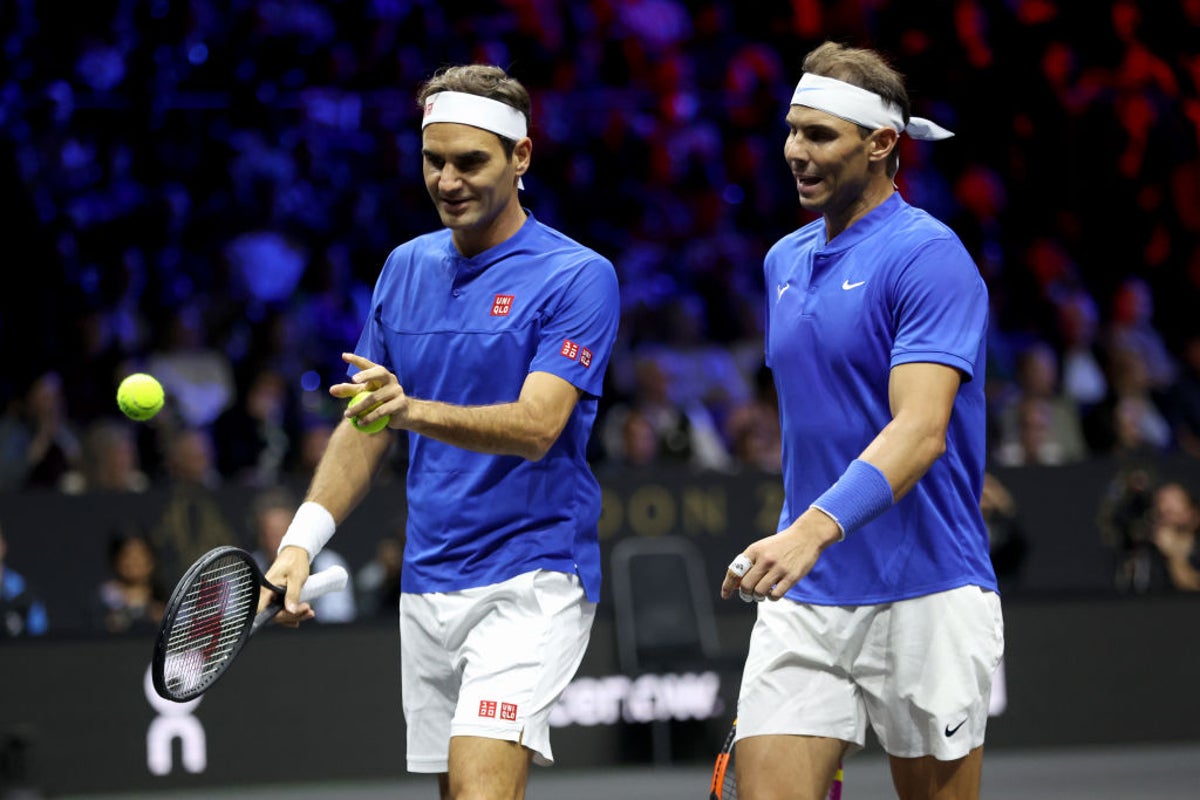 Follow live updates as Roger Federer retires from tennis and plays the last game of his career alongside Rafael Nadal in the Laver Cup. Federer, who will become arguably the greatest champion in tennis history, will retire at 41 and the moment has brought the sport and its rivals together at the O2 Arena.

Federer’s wish to play his last game with his great rival Nadal has been granted and has organized a special occasion with Novak Djokovic and Andy Murray also competing for Team Europe. They will take on Team World, which is led by John McEnroe, and has lost all four previous editions of the match play-style event.

Prior to tonight’s doubles, three singles were played. Casper Ruud won the opening game of the day against Jack Sock 6-4 5-7 (10-7), followed by Stefanos Tsitsipas who crushed Diego Schwartzman 6-2 6-1 to double Europe’s lead.

However, the match was overshadowed by a bizarre protest against climate change in which a man set his arm on fire while standing on the pitch, wearing a t-shirt that read: “End UK Private Jets”.

Murray then went on to take on Alex De Minaur, as Team World scored their first point after a long 5-7 6-3 (10-7) win, before the eyes of the world turned to Federer for the last time and the Swiss brings his storied career to an end. Follow live updates from the opening day of the Laver Cup below:

There are special scenes as Federer hugs each member of Team Europe, then Team World, and then Nadal, Djokovic and Murray thank you all on the track.

No one has left the O2 when tennis comes together to thank Roger Federer.

It will be Federer to serve… It is wide and long… Tiafoe then moves to the backhand and Federer nets! Incredible drama! We’re on 9-9!

Wow – Nadal ducks while Tiafoe cracks a forehand down the line, around the body! Now it’s Team World with match point.

And that’s it! Sok trades crosscourt forehands with Federer, before finishing with the winner down the line!

Federer’s career ends in defeat, but that won’t be tonight’s memory.

Oof. Sock crushes the forehand at Federer, who can’t take him off the net.

VOLLEY from Federer! He read Sock’s passing shot and jumped to the right, before flipping it on the corner! It’s on 7-7!

Tiafoe cracks a forehand at Federer and grabs him on the arm! There are some boos, but the world leads again, 8-7.

Nadal then spins around in revelry as Tiafoe throws the backhand! Level again at 8-8. Tiafoe nets the forehand again, and it’s match point for Federer and Nadal!

Remarkable! Sock somehow finds a winner on the run, which Tiafoe can’t quite believe. It moves the world forward, but Tiafoe then drops a volley into the net. It was a chance, but Sock makes up for it with a slipping volley. The world leads 5-4.

Nadal finds the space at the back of the field to strike back and equalize with the net! Federer’s ACE in the middle! Europe leads 6-5.

But the return goes long and we are level again.

Nadal turns and roars as he clears two smashes and he and Federer take a 3-0 lead! That gets everyone on their feet.

Federer’s return hits the net, then Nadal goes long! Federer then has no control over Sock’s driven pass and the World strikes back to the level of 3-3.

Ah, an awkward silence follows Federer who puts in a forehand and then volley into the net, three set points for Tiafoe and Sock. On the run, Federer can’t keep his forehand in play and Team World’s batting level.

We are now playing a decisive tiebreak.

Federer thinks he kicked it off with an ace – but he’s denied by the let! Tiafoe puts away the winner of the second serve. Tiafoe’s backhand then catches Nadal, who can’t sweep his answer over the net.

When the clock strikes midnight, Europe steps off the board thanks to Federer – but then Nadal puts one long and the world leads 3-1.

Nadal gets the better of the sharp exchange at the net, but then steps in and puts a backhand on the long stretch of the baseline. World lead 4-2 at the substitution.

Big moments, this one, and Djokovic raises his arm as Federer’s passing shot catches Tiafoe at the net. Nadal pushes one wide, but Federer and Nadal feel their chance and get the upper hand again.

Tiafoe then raises his arms apologetically as a volley trickles down the power cord. Tiafoe then plants an overhead in Federer’s feet – and it brings the tiebreaker!

Tiafoe again silences the O2 with a winner and takes the baseline, but Nadal puts his forehand in his feet.

Brilliant play on both pairs’ nets, but it’s Sock who finds the corner to send the winner! Nadal and Federer save another breaking point, before Tiafoe shoots one up

Finally, when Sock throws in Nadal’s serve, they make sure they at least made it to the tiebreak.

Excellent play from Tiafoe, pushing Nadal deep on his backhand and then cutting a volley between Nadal and Federer.

It’s 0-30 on the Nadal service, and then the Spaniard cuts the power cord to get three break points for the Americans.

The first two are saved, before Tiafoe shoves a long backhand and Europa scrambles back to deuce.

Tiafoe misses again – giving Nadal a chance to serve this out, but Sock reacts with a forehand winner past Federer at the net!

Nadal then throws a double foul into the net, but Federer splits Tiafoe and Sock with the smash from the middle of the lane!

The Singapore Time - October 6, 2022 0
Well, Pete Davidson has yet to make his big appearance on The Kardashians Season 2, but that doesn't mean girlfriend (now ex-girlfriend) Kim Kardashian...

Britain is at risk of power outages this winter, National Grid...

“I’m scared and I think about it all the time”: Ukrainians...

WWE makes a change to the Raw commentary team

“I’m scared and I think about it all the time”: Ukrainians describe living with Russians in Finnish shelters

“I’m scared and I think about it all the time”: Ukrainians describe living with Russians in Finnish shelters