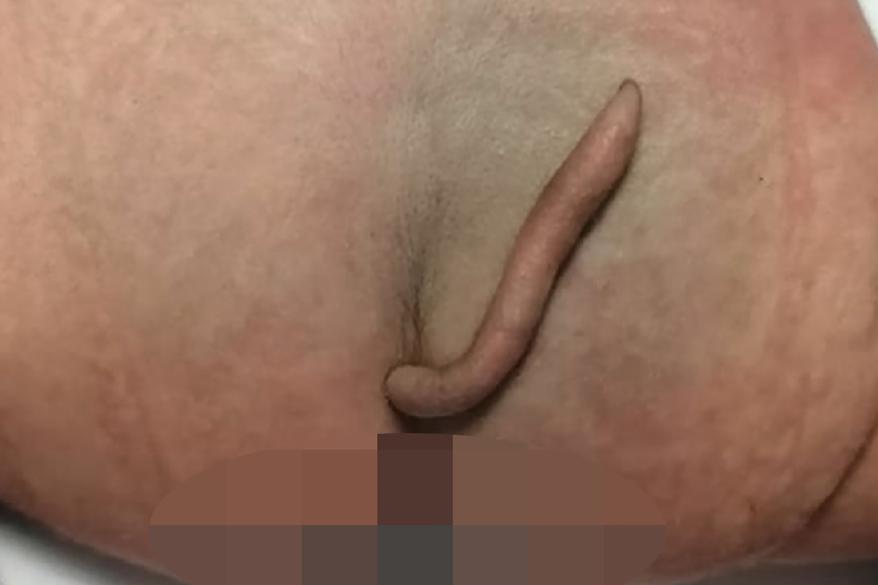 This “tail” is strange but true.

Doctors were stunned by the case of a baby girl who was born with an extremely rare 2-inch-long “true tail.” [Warning: graphic images]

“The presence of tails in humans is extremely rare,” the authors wrote in the study, which was published in the Journal of Pediatric Surgery.

The toddler was born by cesarean section at a rural hospital in northeastern Mexico. On the initial examination, doctors discovered the bizarro butt brush, which was about 5.7 cm long and covered in hair. Accompanying photos show the strange appendage, which is cylindrical and tapers at the tip like partially coiled play-doh.

The baby reportedly cried as doctors pierced the appendage with a needle.

A subsequent X-ray revealed no evidence of anomalies or bony structures in the tail, suggesting that the posterior protrusion was not a rudimentary tail – an evolutionary relic – as in most of the 195 rare cases documented in case studies from the US and England. France, Japan, Italy and Germany, according to the magazine report.

Rather, it was a “true tail”, a benign appendage consisting only of tissue and fat, which is much rarer, with only 40 cases reported in human literature.

The presence of the protrusion was especially peculiar because the girl was born to “healthy parents in her late twenties” and had no history of radiation exposure or infections in the womb, according to the study.

Fortunately, apart from a fifth limb, the baby was perfectly healthy. Doctors found that she had no heart or hearing problems, urinary tract malformations, cerebral abnormalities or spinal deformities.

Physicians reassessed the patient two months later and determined that her weight gain and growth were normal for her age. By this time, the baby’s posterior protuberance had grown to 0.8 cm in length.

After finding the tail free of skin lesions, surgeons decided to cut it off and reconstruct the area via Limberg plasty – a procedure that involves transplanting tissue from the patient’s own buttocks, as seen in graphic photographs.

Fortunately, the operation went without problems and the patient was discharged from the hospital to go through life relieved.

In an even more extreme case, a Brazilian baby was born in 2021 with a “real tail” with a ball at the end like a fleshy medieval mace.

Some families of Uvalde and Sandy Hook join Biden and Pelosi...