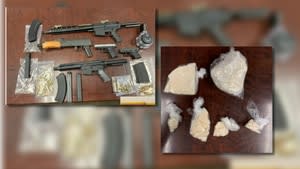 Three men face charges after a narcotics investigation led to a search and seizure of an Atlanta motel.

According to officials, officers learned of illegal drug activity at the Deluxe INN Motel on Campbellton Road SW in July and August.

Residents of motel rooms 111 and 116 were involved in suspected illegal activities, according to police.

Keonte Smith, 20, and Deandre Royster, 23, were both charged with dealing cocaine and possessing a firearm while committing a felony.

The department says drug dealers are making the city unsafe and endangering everyone. They want everyone to know that they are not welcome in the city.

The Singapore Time - August 18, 2022 0
A woman accused of smuggling drugs into a Tennessee prison has been charged with murder after the death of an...