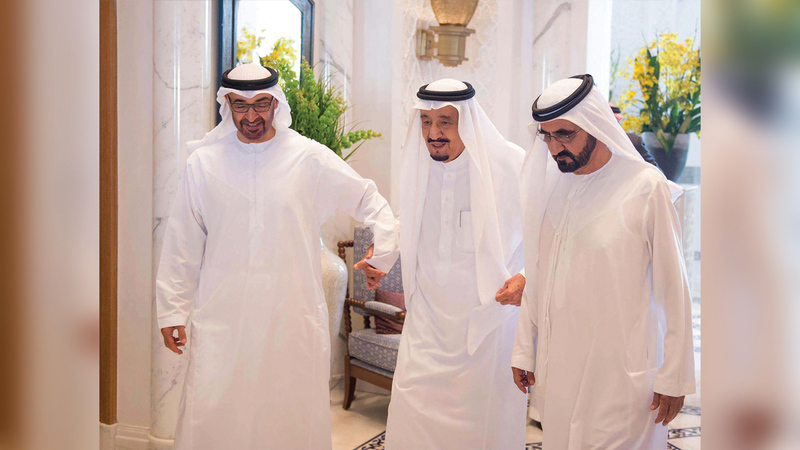 The UAE, its sister Saudi Arabia, is participating in the celebrations of its 92nd National Day, which falls on September 23, amid a great official and popular celebration.

The UAE’s celebrations on the occasion bear the slogan “Forever – Saudi Arabia – the Emirates”, in an embodiment of the depth of brotherly relations that bind the two brotherly leaderships and peoples.

His Highness Sheikh Mohammed bin Rashid Al Maktoum, Vice President and Prime Minister of the UAE and Ruler of Dubai, congratulated the Kingdom of Saudi Arabia on the occasion of the Saudi National Day.

His Highness said through his account on Twitter: “I congratulate the Kingdom.. I congratulate King Salman bin Abdulaziz and his Crown Prince.. I pray to God to perpetuate goodness for them.. The Kingdom and its people have feelings of love in our hearts.. They are our family and brothers.. We are proud of our cohesion.. Our goodness. Together.. our honor together.. and our present and our future together forever, God willing.”

While His Highness Sheikh Hamdan bin Mohammed bin Rashid Al Maktoum, Crown Prince of Dubai and Chairman of the Executive Council, said in a tweet on Twitter: “We congratulate the brothers in the Kingdom of Saudi Arabia on their 92nd National Day. We ask God to perpetuate the glory of the Kingdom and preserve the Custodian of the Two Holy Mosques, And my brother, Prince Mohammed bin Salman, reconciles.”

His Highness Sheikh Maktoum bin Mohammed bin Rashid Al Maktoum, Deputy Ruler of Dubai, Deputy Prime Minister and Minister of Finance, said in a tweet on Twitter: “We celebrate with the Kingdom of Saudi Arabia its National Day, and we congratulate King Salman, his Crown Prince and the people of the Kingdom on this occasion. Every year the kingdom flaunts the dress of splendor and prosperity. Our brotherhood with the Saudi people is extended and deep, cemented by a long history and a common destiny, and from them we move towards a bright future that boasts goodness for our countries and peoples.

The brotherly relations between the Emirates and the Kingdom are a unique model in view of their depth and complementarity, and the rich history they include of cooperation at various levels, which included the political, diplomatic, economic, cultural and other fields.

In 2016, the two countries announced the establishment of the Saudi-Emirati Coordination Council, which works to develop a common vision for deepening and sustaining joint relations, and strengthening the integrated economic system between the two countries.

The UAE and Saudi Arabia share the same visions with various Arab, regional and international issues and files of common interest, based on firm principles that support the sovereignty of security and peace in the region and in various parts of the world, and to achieve stability and prosperity in the Arab world and all peoples of the world.

Bilateral relations between the two brotherly countries were strengthened, thanks to the efforts of the late Sheikh Zayed bin Sultan Al Nahyan and King Faisal bin Abdulaziz Al Saud, may God bless their souls, and extended to reach full partnership under the visions of the late Sheikh Khalifa bin Zayed Al Nahyan and King Abdullah Bin Abdulaziz Al Saud, may God have mercy on them.

While the two countries, under the leadership of His Highness Sheikh Mohamed bin Zayed Al Nahyan, President of the State, and Custodian of the Two Holy Mosques King Salman bin Abdulaziz Al Saud, King of Saudi Arabia, continue to strengthen these relations and ensure their advancement to the highest levels.

The leadership of the two countries is keen to share the celebration of the national occasions in the two sisterly countries, an embodiment of the consolidation and strength of the relations that unite them, which represents an extension of historical bonds, customs, traditions, present and a common destiny, based on positions and goals that achieve the integration of visions between the two countries.

The cultural relations between the two countries were represented on several levels, whether through the establishment of many joint agreements and programs, or at the level of cultural overlap between the university institutions working in this way, and the creators and intellectuals in the two countries, within a vision based on the fact that the relationship between the two brotherly countries is strengthened by the relationship of two peoples. They have an extension, history, and a cultural, social, geographical and economic legacy.

The economic and trade relations between the UAE and the Kingdom constituted an exceptional and rich model of cooperation and solidarity, and the two countries affirmed in a joint statement last December, their quest to enhance strategic cooperation and economic, commercial and development integration, to build a better future that achieves security, prosperity, comprehensive development, and the aspirations of the peoples of the two countries.

The Kingdom of Saudi Arabia is the largest investment partner of the UAE at the Gulf, Arab and regional levels, and the fifth globally. It owns and contributes to more than 11,000 Saudis with economic licenses in the UAE until September 2021, while more than 140 Emirati companies invest in Saudi Arabia.

The Singapore Time - October 7, 2022 0
Kym Marsh and Molly Rainford appeared in good spirits on Friday as they left their hotel in Elstree and headed to Strictly Come Dancing...