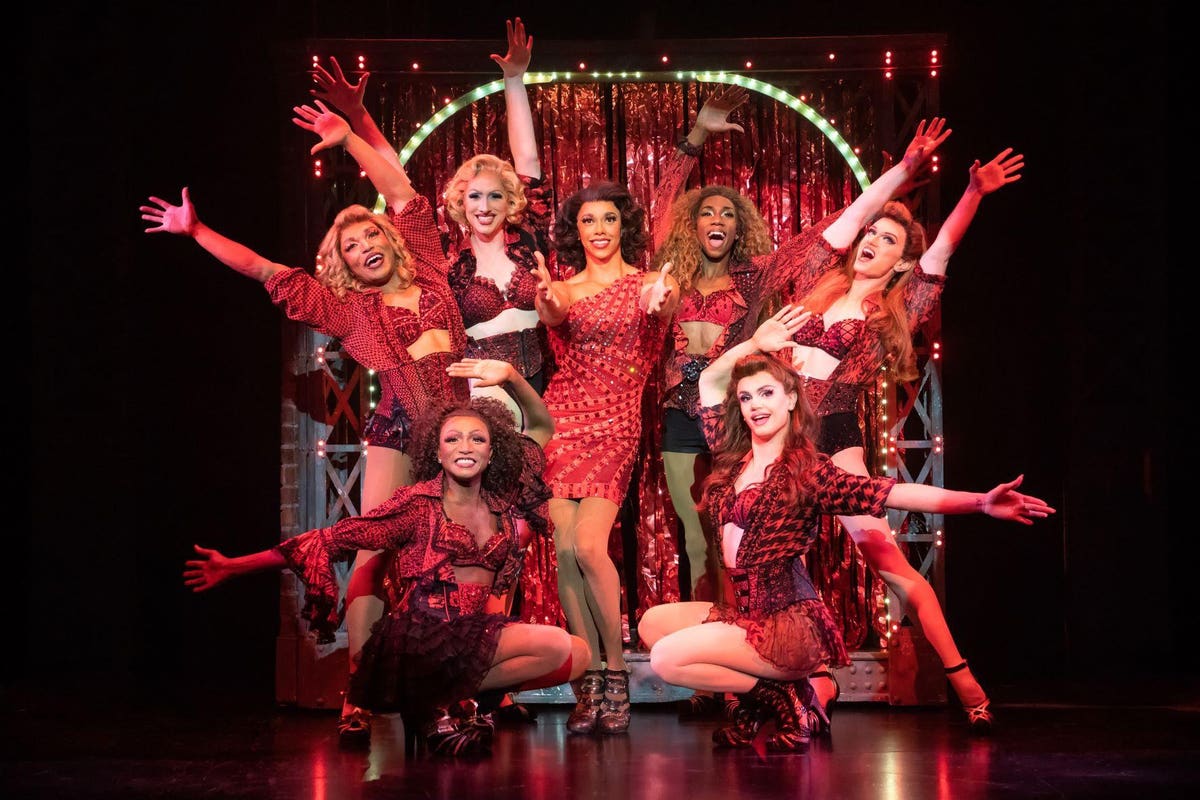 Undoubtedly, the boots are the heart of Kinky boots.

This version of the musical, which opened in 2013, stars Callum Francis as Lola, Christian Douglas as Charlie Price, Danielle Hope as Lauren, Brianna Stoute as Nicola and Sean Steele as Don.

The sequin-filled fun costumes we see on stage are from acclaimed costume designer Gregg Barnes, who really had fun with the red thigh-high boots, which are covered in sequins. The red boots in Kinky boots never go out of style, but what goes into making these boots? They are the real star of this show.

Especially when in the second half of the show models walk down a catwalk during Milan Fashion Week – on stage – the ties this musical has with the fashion world are so close and so funny.

Barnes speaks with TSTIME about the art of costume design, the magic of sequins and some fun secrets we can see in Kinky boots.

TSTIME: What costumes were different for this version of Kinky Boots?

Greg Barnes: The new Off-Broadway production of Kinky boots is a celebration of costumes we developed over the years from the original Broadway run for productions around the world. Most of it will be known to a returning audience member, but there are also surprises.

Where are the boots made and how durable are they?

The boots! Most boots are made here in New York City. They are a marvel of construction made by the skilled craftsman at TO Dey’s custom shoes. They were with us from the start, and believe it or not, some of the boots made for the Broadway production lasted the entire show!

Wow. What makes this show special in your eyes?

Kinky boots contains a message of acceptance and celebrates the opening of your heart to others who may not share your worldview. Those themes are always relevant, but now perhaps more than ever. It was a privilege to experience this ride. I feel blessed by every moment I’ve been involved in this show.

What do people not know about the costumes?

I think people assume that the biggest challenge in Kinky Boots design is coming up with the costumes worn by the drag characters, but it’s the factory workers that are the hardest to get. What happens in that factory is the heartbeat of the story, so you want to make sure that the people who live in that building are very specific and have a colorful history of their own. It is wonderful to design a wardrobe together with the actors in the fitting that celebrates the story of their characters.

Why are sequins so important?

Sequins! Well… they are magical! The way a sequin or beads throws light back into the space creates a connection with the audience. I think we all carry childhood memories of fairytale characters surrounded by pixie dust. By using reflective surfaces in a show where necessary, we tell the audience that something magical or luxurious or special is happening. Sparkling things catch the eye and I think many people crave a little sparkle in their lives.

Who was your design mentor and what did you learn from them?

I was lucky to have a lot mentors in my life. My first was a gentleman named Clark Mires, my university professor and a brilliant designer in his own right. Along the way, I was encouraged by the legendary Bob Mackie and the designer Robert Morgan, who often worked with Jack O’Brien at The Old Globe Theater in San Diego, my hometown. Once I was in New York? Santo Loquasto and Ann Roth and Carrie Robbins and Jane Greenwood were all very nice to me. I mean, the list goes on. Working in the theater can be difficult, so if someone you respect believes in you and lifts you up, it has great meaning.

What else can you tell us about the boots we see in? Kinky boots?

The boots’ design in the show’s finale pays tribute to all things ‘British’. Our intrepid leader Jerry Mitchell came up with the theme, and I got to work on it. It’s a fashion show, of course, but the clothes – while spectacular – are meant to play second fiddle to the boots. The “Angels” are decked out for the runway show, but it all really takes off when Don and the factory workers take the stage. Everyone is in their Kinky Boots. It’s a celebratory moment when Don proclaims, “You change the world when you change your mind.” It’s one of the best musical endings I can think of. Did I already say I love Kinky boots? Make no mistake, it was one of the highlights of my career!