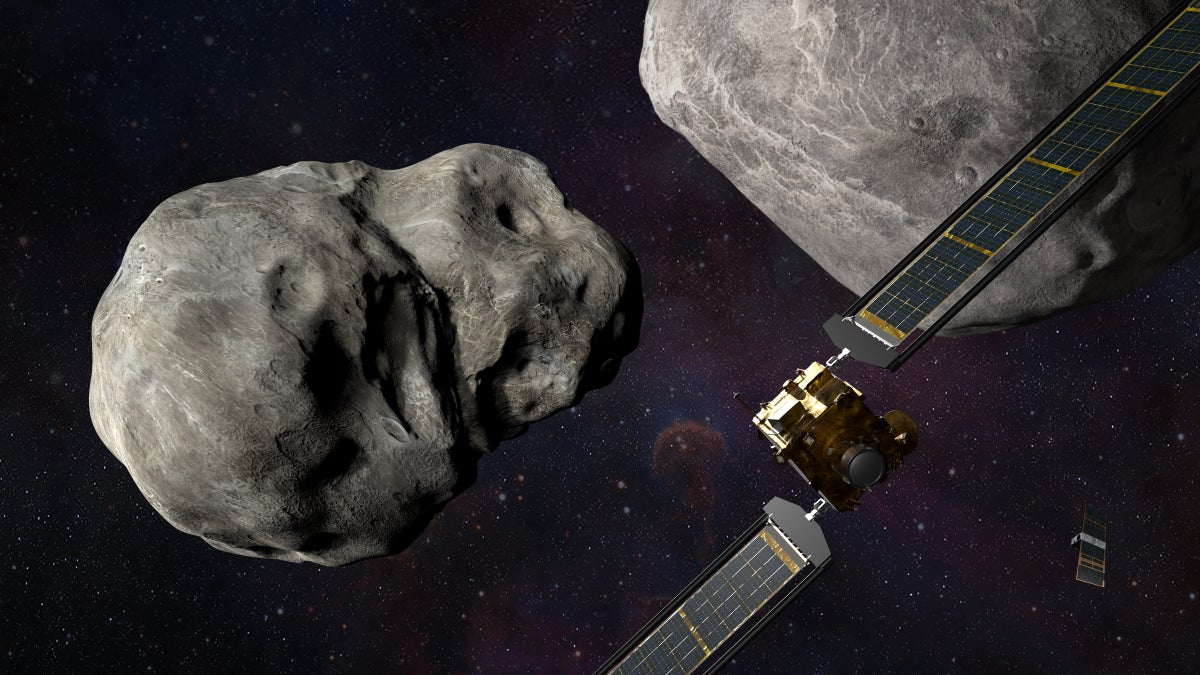 The dinosaurs could only watch helplessly as an asteroid or comet brought their rule on Earth to an end, as did countless fictional humans in the space rock doomsday Hollywood fare like “Don’t Look Up” or “Seeking a Friend for the End.” of the End of the World.”

But accepting the inevitability of a planet skipping asteroid impact doesn’t sit well with NASA, and on Monday the space agency is doing something about it — testing a technique to divert dangerous asteroids from Earth by hitting them with a fast moving spacecraft.

“The ground systems are ready and the spacecraft is healthy and on track for an impact on Monday,” Edward Reynolds of the Johns Hopkins Applied Physics Laboratory, APL, told reporters at a press conference on Thursday about the test. “We have enough propellant and we have enough power.”

APL handles the operations of the Dart – Double Asteroid Redirection Test – spacecraft for NASA, and Mr. Reynolds is the mission program manager. He will be at the APL Mission Operations Center in Laurel Maryland Monday night at 7:14 PM EDT, when the 1,200-pound spacecraft collides with the small asteroid Dimorphos in an attempt to alter its orbit slightly — the asteroid poses no threat to Earth.

It is a first of its kind mission, and an ambitious one.

Dart is a proof of concept mission that could help scientists understand whether a scaled-up version of this “kinetic impactor” technique could deflect a larger asteroid or comet threatening Earth, NASA’s Dart program scientist Tom Statler told reporters on Thursday. .

“There are two tests in Dart. The first test is the test of our ability to build an autonomously guided spacecraft that will actually achieve the kinetic impact on the asteroid,” he said. “The second test is the test of how the actual asteroid responds to the kinetic impact Because at the end of the day, the real question is, how effectively did we move the asteroid?”

Dimorphos is a small asteroid about 180 meters in diameter that also orbits a larger asteroid, Didymos. This creates a perfect natural lab for Dart, according to Dr. Statler, as it currently takes Dimorphos 11 hours and 55 minutes to complete an orbit of Didymos. Scientists expect the impact of darts could slow that orbital time from 73 seconds to 10 minutes, assuming the mission is a success.

A successful mission would confirm scientists’ models of how asteroids like Dimorphos behave, Dr. Statler added, and that would give NASA confidence in the design of a future mission to fend off an actual threatening asteroid.

“On the other hand, if the asteroid reacts to the arrow impact in a totally unexpected way,” he said, “that could send us back to reconsider, to what extent kinetic impact is really universally useful.”

It won’t be long before NASA and APL get an answer to that question, as Dart is rapidly approaching the Didymos and Dimorphos system.

“About 24 hours before the collision, it’s all hands on deck,” APL Dart mission system engineer Elena Adams told reporters on Thursday. Although Dart transitions into fully autonomous flight four hours before impact, APL operators are ready to intervene if anything goes wrong, right down to the small asteroid’s missing.

“We have 12 contingencies and number 21 is ‘Missed Impact,'” said Dr. Adams. ‘We are going to save propellant and look for the objects to return to. So that’s the plan.”

See also  Atwoli: MPs become scammers if they are not paid well

Dart took his first photo of the two asteroids in July, and what were tiny bright spots will quickly grow in the field of view of the spacecraft’s Didymos Reconnaissance and Asteroid Camera for Optical navigation, or the Draco instrument, as Dart gets closer. Dimorphos is so small, and Dart travels so fast, said Dr. Adams, that the asteroid will remain relatively small until the last few moments before impact, giving scientists their first real look at the asteroid’s shape and texture.

“Our last image is probably from about two and a half seconds before the impact,” she said. “So Draco’s field of view will actually be completely filled with this beautiful image of Dimorphos.”

NASA will run the Dart impact live in two different feeds. A silent stream of images from Dart’s Draco camera, about one frame per second, will be available on NASA’s Media Channel from 5:30 p.m. EDT, while a commentary and the Draco images can be viewed on NASA TV from 6:00 p.m. EDT.

The success in the first part of the test will be marked by loss of radio contact with Dart after the final photos and its impact on Dimorphos, and there will be celebrations among APL’s engineers, but that only marks the beginning of the next half of the mission, said Dr. Statler.

“The engineering team is celebrating and the astronomers at that point will say, ‘Okay, time to get to work,'” he said.

That’s because a wide range of ground and space telescopes will monitor Dimorphos for signs of Dart’s impact, then continue to monitor the asteroid for signs that its orbit has in fact changed.

First and foremost will be the Light Italian CubeSat for Imaging of Asteroids, or LiciaCube, a small satellite produced and operated by the Italian space agency that piggybacked on Dart until its farewell on September 11. It will be able to capture the impact and resulting material ejected from Dimorphos.

See also  Reports: LIV Golf in Saudi Arabia gets no points in the world rankings

“LiciaCube, follow Dart about three minutes behind,” said Dr. Statler, “passing Dimorphos at a safe distance of about 55 kilometers.”

Also targeting Dimorphos will be the Hubble Space Telescope, James Webb Space Telescope and even NASA’s Lucy mission, which is on its way to study the Trojan asteroids in Jupiter’s orbit.

“In the first few hours after the impact, we look for an overall clarification of the entire system, which indicates how much dust and other debris has emerged,” said Dr. Statler.

Those eyes in the sky combined with ground-based telescopes and radar readings will help NASA determine how much Dart changes Dimorphos’ orbit, if any, but it won’t happen overnight.

“I think the optical observers and the radar observers have a friendly rivalry to see who will get it first,” said Dr. statler. “I don’t want to get into the middle of that debate. But I think I’d be surprised if we got a solid measure of period change in less than a few days, and I’d be really surprised if it took more than three weeks.”

Whether it’s a handful of days or much longer to get the results, and whether Dart moves Dimorphos’ orbit a lot or a little, Dr. Statler pointed out that the mission remains historic and groundbreaking, the first time humans on Earth have attempted — with any chance of success — to change the behavior of heaven.

“We’re moving an asteroid, we’re changing the motion of a natural celestial body in space — humanity has never done that before,” said Dr. Statler. “This is the stuff of science fiction books and really corny Star Trek episodes from when I was a kid. And now it’s real.”

The Singapore Time - October 7, 2022 0
Hailey Bieber was spotted at a Lacoste event in West Hollywood, California on Thursday after Kanye West linked her to a 'nose job' after...