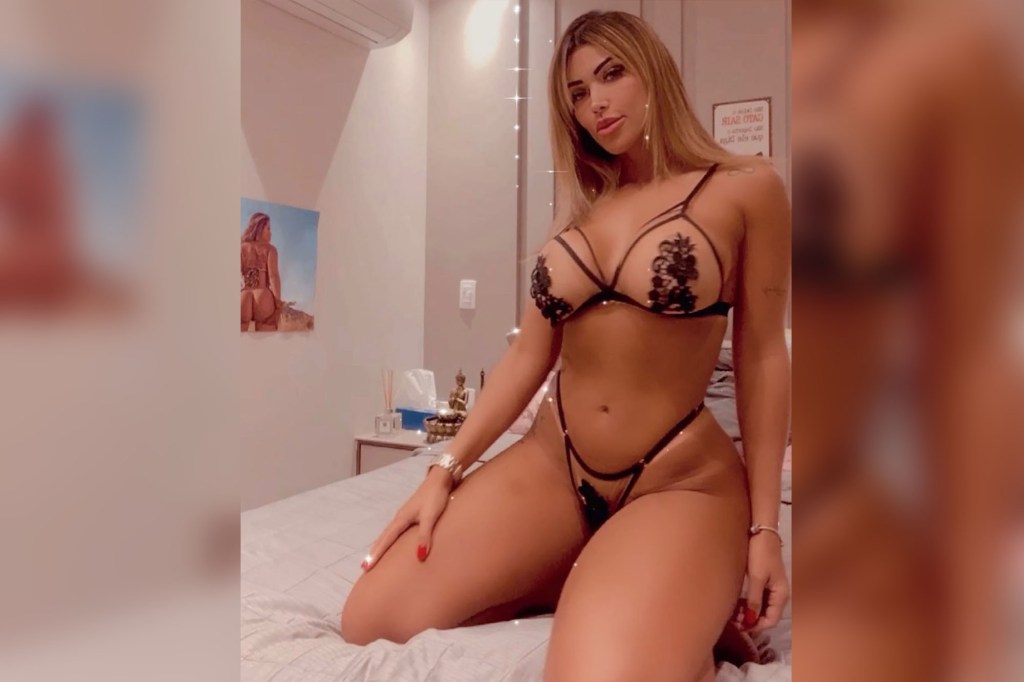 A Brazilian OnlyFans model who married and then divorced herself has finally found a life partner and claims that food is the secret of their love life.

“We first met about a year ago when we started working together,” Cris Galêra, 34, told NeedToKnow.online about her spirited relationship with Miquéias Rocha, 25.

This marked a full 180 of the São Paulo lingerie model and the influencer’s previous romantic arrangement, in which she tied the knot with herself in September 2021 in the name of “self-love.”

“They think I’m kidding, but I actually married me!” said the self-proclaimed “sologamist,” who reportedly turned down “thousands” of marriage offers from male suitors on social media.

Galêra admitted that problems from previous relationships prompted her to move forward with her recent marriage. “Men have trouble being faithful or staying with just one woman. They want several [women] at the same time,” insisted the conjugal solo artist, who regularly posts steamy bikini snaps for her 220,000+ Instagram followers.

But then, in a somewhat paradoxical move, the so-called self-lover divorced herself after meeting a new man—an affair that quickly hissed.

Then she met Rocha in the workplace. “Miquéias was the person who supported me with digital marketing for my social media,” described the underwear model, who also has a thriving OnlyFans account. “And through routine, he became more and more present in my life.”

Galêra gushed: “Then, in December [2021]I was single and the next month he was too, so this brought us even closer and then we finally started dating!”

Sure, going from “sologamy” to soulmate may seem whiplash-worthy, but she claims they have fulfilling love lives — and that cooking with love is the secret to their sex-cessing.

“Usually we cook aphrodisiac recipes once a week,” explains the Brazilian. “Because of our daily routines, work, etc., it’s hard to have time to cook every day, but we do our best to have a special moment together and use those ingredients to brighten up our relationship.”

She added that “an aphrodisiac menu helps set the perfect mood for making love later,” making it so that “a romantic evening can go way beyond a candlelit dinner.”

Despite her blossoming relationship, the influencer has not been forced to shed all her single ways. First, the soulmates currently live in separate houses, despite both living in Sao Paulo.

“I like my privacy and he likes his privacy too!” admitted the reformed solo gamist. “We have a lot of maturity and respect in this part.”

It is still unclear whether the former solo artist will eventually receive a wedding ring.

Galêra is not the first to tie her own knot. In June, an Indian woman planned to marry herself in what would likely be the country’s first case of solygamy.

But Galêra enjoys her time with her beau, and for those who want to spice things up a bit, she shared recipes for their boudoir-tested libido boosters, including one for shrimp pasta.

“Seafood is already known as an aphrodisiac and pasta is delicious,” Galêra claimed. “It’s worth remembering that shrimp aid in testosterone production.”

– A clove of garlic

– About 20 pink shrimp (clean before use)

– Peel of the zest of a Sicilian lemon

– Salt and black pepper to taste

The epicurean performance enhancer means that the pasta is cooked in two liters of boiling water with a pinch of salt and without adding oil to the water. When they are al dente, turn off the heat, remove a ladle of this water from the pan and drain the rest.

Then heat a tablespoon of oil in a pan or frying pan over low heat, whisk it with lemon zest and let it marinate for a few minutes. Add garlic, fry a little and top with shrimp before seasoning with a pinch of salt and pepper.

Let the shrimp cook for three minutes on each side, add the pasta and add enough of the excess to cover the entire pan. Stir well so that all noodles absorb the essence of lemon oil.

Finish by turning off the heat, stirring in freshly chopped fresh basil and serving immediately.