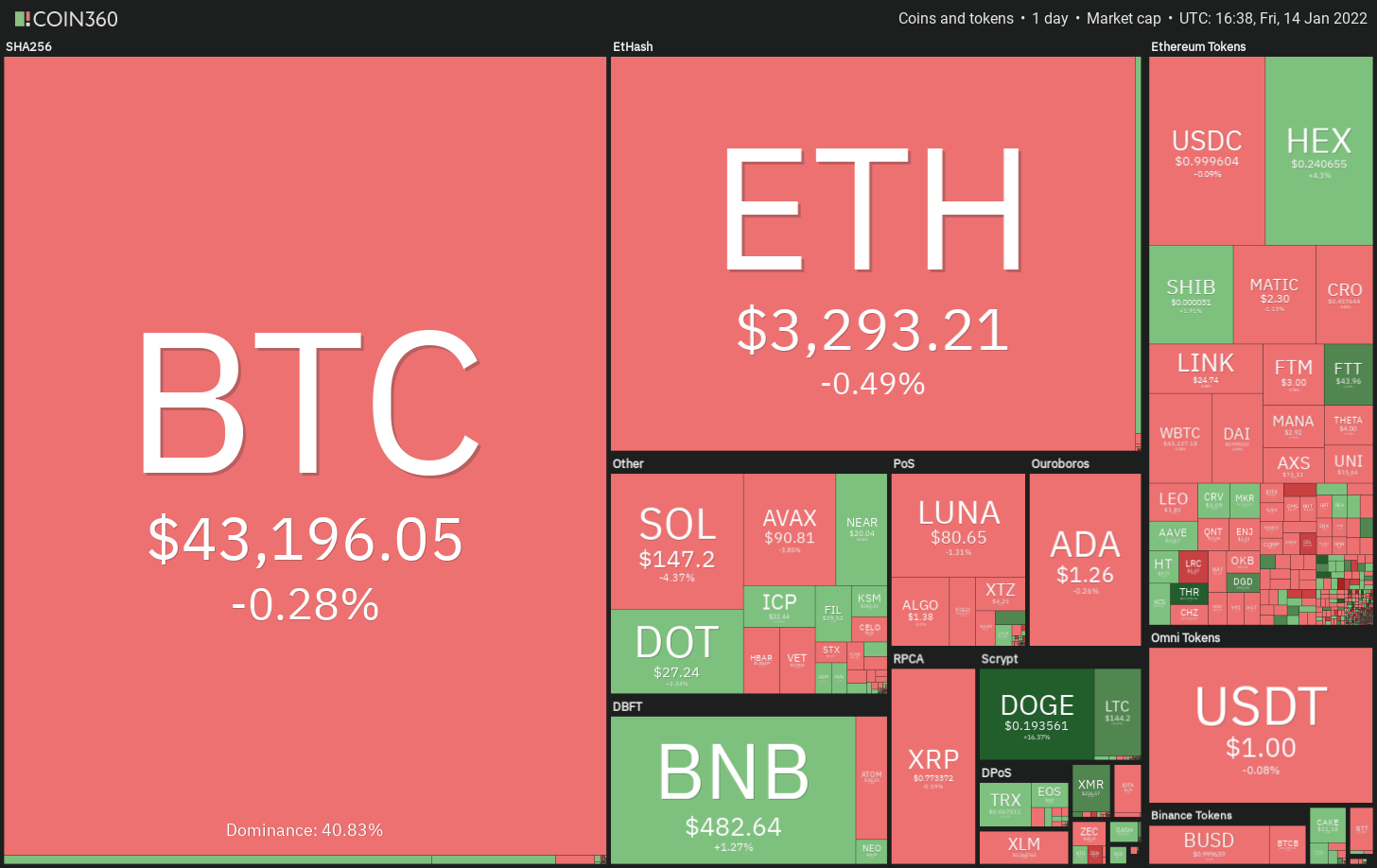 Bitcoin (BTC) and most major altcoins are facing selling at higher levels and buying at lower levels, indicating the possibility of range formation. On-chain analytics firm Whalemap said a “recovery of $46,500 will look like a trend reversal,” for Bitcoin, as the previous 90,000 BTC accumulation phase was at that level.

Fidelity Digital Assets said in its annual report that the “massive accumulation” of Bitcoin by Bitcoin miners suggests that the “Bitcoin cycle is far from over.” The report added that more sovereign nations could “acquire Bitcoin in 2022 and perhaps even see a central bank make an acquisition.”

The CEO of Swiss financial institution SEBA Bank, Guido Buehler, said in a recent interview that if the right counterparties and the necessary regulations are in place, SEBA’s asset pools could invest in Bitcoin at the right time. Buehler painted a bullish picture for Bitcoin, saying a rally to $75,000 was possible.

Will Bitcoin and most major altcoins remain limited in the short term? Let’s study the charts of the top 10 cryptocurrencies to find out.

Bitcoin turned down the 20-day exponential moving average ($44,681) on January 13, indicating that the bears continue to sell on rallies. The bears will now attempt to drive the price back to the strong support at $39,600.

Both moving averages are down and the Relative Strength Index (RSI) is in negative territory, indicating that the path of least resistance is on the downside. If the sellers break down and hold the price below $39,600, the BTC/USDT pair could extend the decline to $30,000.

A breakout and close above $45,456 will be the first indication that the correction may be over. The pair could then begin its march north towards $52,088.

Ether’s (ETH) bounce off the descending channel support line on January 10 could not even reach the 20-day EMA ($3,485), suggesting demand is drying up at higher levels. students.

The moving averages are down and the RSI is below 40, suggesting the bears are under control. The sellers will now try to pull the price towards the area between the psychological level at $3,000 and the support line of the channel. A break and close below $2,652 will signal the start of the next leg of the downtrend.

On the contrary, if the price rises from the current level, the bulls will make another attempt to push the ETH/USDT pair above the 20-day EMA. If successful, the pair could hit the resistance line of the channel and later the 50-day simple moving average ($3,893). Bulls will need to push and hold the price above this level to signal that the downtrend may be over.

Binance Coin (BNB) is facing strong resistance during the 20-day EMA ($487), but a small silver lining is that the bulls haven’t given much ground. This suggests that traders are not rushing for the exit.

If the price breaks above the 20-day EMA, the bulls will attempt to breach the hurdle at the downtrend line. If they succeed, the BNB/USDT pair will signal a possible change in trend. The pair could then attempt a rally to $617.

Conversely, if the price is falling from the 20-day EMA or the downtrend line, it will suggest that the bears are selling on rallies. This could keep the pair stuck inside the channel for a few more days.

Solana (SOL) hit the 20-day EMA ($157) on January 13, but the bulls couldn’t clear that hurdle. This suggests that the bears have not given up yet and are selling on rallies.

The bears will now attempt to resume the downtrend by pulling the price below the support at $130. If they do, the SOL/USDT pair could drop to the next major support at $116.

The descending moving averages and the RSI in negative territory indicate that the path of least resistance is on the downside.

Contrary to this assumption, if the price breaks above the 20-day EMA, the pair could rally to the resistance line of the channel. Bulls will need to push the pair above the channel to signal a possible trend change.

Cardano (ADA) turned down the 50-day SMA ($1.35) on January 13, but the bulls did not allow the price to break below the $1.18 support. This suggests that the bulls are buying on the dips.

The bulls will now attempt to push and hold the price above the 50-day SMA. If successful, the ADA/USDT pair could rally to the descending channel resistance line. A breakout and close above the channel could indicate that the downtrend is over.

Alternatively, if the price is falling from the 50-day SMA, it will suggest that the bears are continuing to sell on the rallies. The sellers will then try to drive the pair down below $1.18 and pull the price towards the critical support at $1.

Ripple (XRP) turned down the 20-day EMA ($0.80) on January 13, but a small bright spot is that the bulls didn’t allow the price to dip below the support at $0.75. This indicates an accumulation at lower levels.

If the bulls are pushing the price above the moving averages, it will suggest that the bears might be losing their grip. The XRP/USDT pair could then reach the overhead resistance at $1.

If the price drops from this level, the pair could stay in the range between $1 and $0.75 for a few more days. A breakout and close above $1 will signal the start of a move higher towards $1.41.

Terra’s LUNA token broke and closed above the channel’s resistance line on January 12. The bears attempted to pull the price below the 20-day EMA ($78.61) on January 13 but failed. This indicates that the bulls are aggressively defending the support.

The buyers are currently trying to push and hold the price above the channel and overhead resistance at $83.86. If they succeed, the LUNA/USDT pair could climb to $93.81.

The 20-day EMA is trying to present itself and the RSI has moved into positive territory, indicating that the buyers are trying to return.

This positive view will be invalidated if the price declines from the current level and breaks below the moving averages. This could push the price down to the support line of the channel.

Polkadot (DOT) turned down the 20-day EMA ($26.81) on January 13, but the positive sign is that the bulls haven’t given much ground. This indicates that bulls view dips as a buying opportunity.

The bulls are currently trying to keep the price above the moving averages. If they do, the DOT/USDT pair might hit the broad resistance at $32.78. The flat 20-day EMA and the RSI near the midpoint suggest a balance between supply and demand.

If the price drops from $32.78, the pair could extend its stay in the range for a few more days. The next trend move can start on a breakout and close above the overhead resistance at $32.78 or on a breakout below the support at $22.66.

Avalanche (AVAX) declined the 20-day ($96) EMA on January 13, indicating that the bears continue to sell on the rallies. The price fell back to the uptrend line of the symmetrical triangle, which could act as support.

If the price rebounds from the current level, the buyers will again attempt to propel the price above the moving averages. If successful, the AVAX/USDT pair could rally to the downtrend line of the triangle.

A breakout and close above the triangle will suggest that the correction may be over. The pair can then rise to $128.

Contrary to this assumption, if the price slips below the uptrend line of the channel, the pair may retest the critical level at $75.50. If this support cracks, the pair could start falling towards $57 and then $50.

Dogecoin (DOGE) broke and closed above the 20-day EMA ($0.16) on January 13, which was the first indication that selling pressure might be easing. This was followed by another sharp move today which pushed the price above strong overhead resistance at $0.19.

However, the long wick of today’s candlestick suggests that the bears continue to sell higher. If the price holds below $0.19, the DOGE/USDT pair could drop to the moving averages and extend its range-bound action for a few more days.

Conversely, if the price holds above $0.19, the bulls will make another attempt to clear the overhead resistance zone at $0.22-$0.24. If they succeed, the pair could rally towards $0.30.

The views and opinions expressed here are solely those of the author and do not necessarily reflect the views of TSTIME. Every investment and trading move involves risk. You should conduct your own research when making a decision.