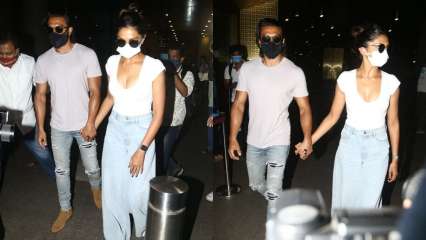 There was a time when Ranveer Singh and Deepika Padukone were considered a “power couple,” and now, especially after Vicky Kaushal-Katrina Kaif, they are often targeted by trolls. These days, their scouting moments become the go-to place for trollers, and they try to ridicule the duo’s bond. After enjoying a long vacation, the couple returned to town and were spotted exiting the airport.

The couple were twins in white casual attire and they were holding hands as they walked to their car. Although they look adorable, but this gesture irritated netizens and they went wild with their comments. A user pointed out and said, “Bakwass…mommy daddy ne apne bacho ke hath itne nahi pakda hoga jitna ye pakad ke chaltr hai..bollywood nautanki..jus imagine no one was watching them, normal life me you dikhawa nahi karte..idiot’s.” While a Another user commented, “Yaar Inka kyaa photos lene ek insaan hi toh hai….. Pata hai ki ek star hai lekin ek baar photo leke chod do na…” Another user added that the financial receipt of their last film ’83’ had affected them, “Film flop karne ke baad chal side hat. Hagar movie hit karti toh Wahi ruk karke photo khichata. However, few hailed them as a “power couple”, a “beautiful couple”, and one user praised Deepika’s collarbone saying, “Deepika’s collarbone is something everyone dreams of. girls. for.”

Recently, Deepika Padukone posted a photo of herself on Instagram and this too did not please Internet users. The “Yeh Jawaani Hai Deewani” actress set the internet on fire with her selfie. Deepika shared a selfie on Wednesday afternoon in which she tried the hair flip trend, which she says failed completely. The actress revealed in the caption that her attempt to twist the hair was an epic fail.

She captioned the photo, ‘I tried to do ‘that hair thing’ people do and it failed miserably! Her husband, actor Ranveer Singh, left a pasty comment that read, “Teri zulfon mein khoya rahoon (May I be forever lost in your hair).” To this some netizens asked, ‘Kyun bhai dandruff ho kya?”

‘I know she has bad days’: Hrithik Roshan shares his mom’s workout videos, calls her inspiration to ‘get better’