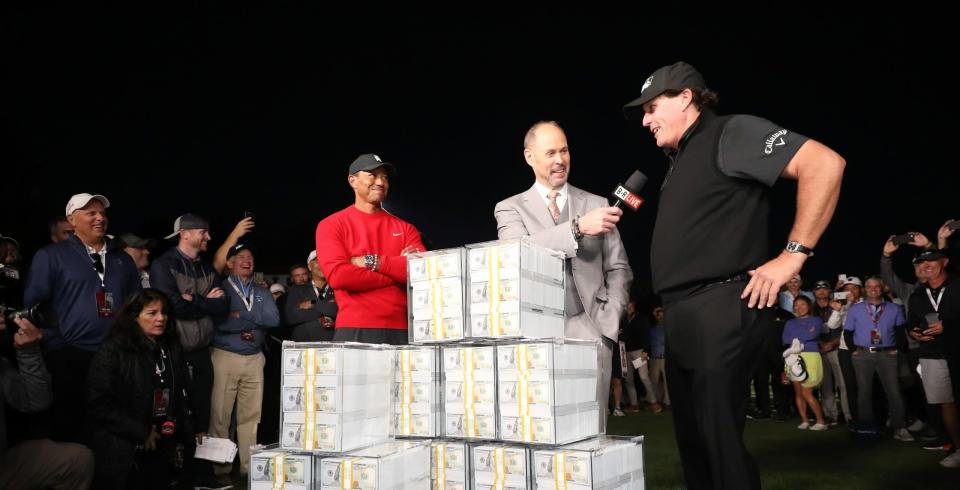 Thanks to the lucrative new long-term PGA Tour television deal and rising purses this year, he set a new single-season record with $12,896,849 in prize money in 19 starts. There are still 10 weeks left in the 2021-22 Tour season. Good job if you can get it.

“I never dreamed of playing for so much money,” Scheffler said. “I don’t know how much money I made this year, but it’s definitely more than I deserve for hitting a little white golf ball.”

Those words were in direct response to Scheffler being asked if there was any amount of money that would change his mind about staying with the Tour. “I don’t think so,” Scheffler said. “I think if there was, there’s a place you can find it now.”

Scheffler laughed at his own joke – not all the way to the bank like Phil Mickelson, Dustin Johnson and most recently Brooks Koepka, who officially joined LIV Golf on Wednesday.

For Scheffler and other top stars such as Rory McIlroy, Jon Rahm and Justin Thomas, the decision to stick with the Tour is black and white. For others, like Koepka, it’s not necessarily a shade of gray but rather green. Scheffler, who shares the same management team as Koepka, admitted he was surprised to see Koepka jump ship.

“I was at a party with him last week and that was definitely not what he had in mind,” Scheffler said. “We’ve been focused on building the PGA Tour and getting the guys who stay here together and just having discussions and figuring out how we can help benefit the Tour. So seeing Brooks leave was definitely a surprise to us.

It got to the point where the knee-jerk reaction to Justin Thomas’s withdrawal from the Travelers Championship on Wednesday morning was that he should also join LIV. So sad that Thomas felt he had to explain his legitimate injury on social media before ‘the rumors swirled’.

Money talks. But in the case of the Mickelsons, Johnsons and Koepkas, it is the rich who get richer. There are no difficult moments on the Tour. Already this season, the top 25 on the money list have all crossed the $3 million mark and there are 94 millionaires stretching all the way to Peter Malnati. (Poor Rickie Fowler, who given his crisis, you’d think he might need a loan from sponsor Rocket Mortgage took out another $981,404.)

At this point, it’s clear that players who are in it strictly for the money, preoccupied with injuries, either know they’re washed up, or prefer to stay home counting their money (family time, as they call) are going to keep selling for LIV Golf, whether the 9/11 families write protest letters or their fans are disappointed in the blood money. The PGA Tour commissioner said so during his press conference on Wednesday.

“I’m not naive,” he said. “If this is an arms race and the only weapons here are dollar bills, the PGA Tour can’t compete. The PGA Tour, an American institution, can’t compete with a monarchy foreigner who is spending billions of dollars trying to buy the game of golf.

Mickelson, Johnson and DeChambeau reportedly got more money from Saudi Arabia’s sovereign wealth fund (Public Investment Fund, a vehicle that controls assets worth $500bn) to join LIV than it cost them to buy Newcastle United, a Premier League football club. The money LIV spends on golfers is outrageous and none of the top 10 players have sold yet.

Monahan’s answer to the arms race? Throwing money at the problem. He announced that the Tour would increase six existing events to $20 million, the Tournament of Champions to $15 million and the Players Championship to $25 million, as well as the creation of a new international series of three events to autumn. That’s an increase of – irony alert – $54 million.

Besides his fixation on media rights, Mickelson might have stayed put had it been announced a year ago. That’s a lot of what he was trying to use his leverage from a rival circuit’s potential to get before he was outed for calling the Saudis a “scary mother——-” and d to have torn the Commish a new one.

Will Monahan’s revamped season and his ever-growing wealth be a deterrent enough to prevent more players from joining LIV, who still have three players to announce to fill their 48-man field in Portland next week? Or will the Saudis just raise the bar and dig deeper into their endless pockets?

The Tour has never faced a competitor who could spend them more, but Tour business doesn’t really hurt, to hear Monahan tell it. “We grew by 20% between 2021 and 2022,” he said. “We will grow faster over the next 10 years than we have at any time in our history.”

When Monahan was asked if PGA Tour pros were underpaid, he struggled to spit out an answer – as if he really meant, “Seriously? Underpaid… more like overpaid – before finally getting into the storyline, saying, “I want every player on the PGA Tour to make more money, and that’s what I’m going to continue to focus on, and I go, we’re going to do it like we always have and there’s more to come on that front.

What a time to be an elite male professional golfer – or his agent.

No matter how noble the cause, the Silverstone protest was reckless and risking lives