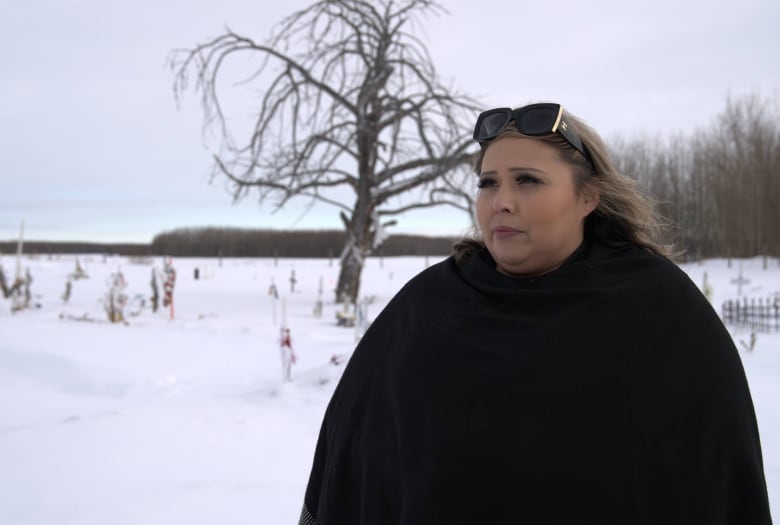 WARNING: This story contains details that some readers may find disturbing.

A new report suggests tainted, unpasteurized milk was responsible for the deaths of many First Nations children at a residential school in Alberta.

The conclusion comes from a preliminary report released Tuesday by the Acimowin Opaspiw Society. The Saddle Lake Cree Nation formed the group in 2021 to investigate unmarked cemeteries of the Blue Quills residential school in central Alberta.

The organization has been collecting testimonials and sifting through documents provided by the Catholic Church to prepare the report detailing some of its initial findings.

“It seems people are happy to accept that these kids just died of tuberculosis because First Nations people are natural carriers of tuberculosis and that’s a farce,” Leah Redcrow, the association’s executive director, said at a press conference at the site. of the Sacred Heart Cemetery in Saddle Lake.

The report links consumption of unpasteurized milk to rampant illness among the children, citing nutrition as a differentiator between them and personnel administrators.

Redcrow said children who entered school healthy became sick within a month and, in many cases, soon died.

“We feel that these children were intentionally infected with tuberculosis,” she said, adding that other residential school studies should examine livestock data.

Roman Catholic missionaries established the school in Lac La Biche, Alta.in 1891. The buildings were moved to the Saddle Lake First Nation in 1898 and renamed Blue Quills.

The school was moved in 1931 to a site near St. Paul, Alta, about 90 miles northeast of Edmonton.

Keith Warriner, a food safety professor at the University of Guelph, said it wasn’t until around the early decades of the 20th century that people accepted raw milk and associated it with tuberculosis.

“It was a hard sell,” he said Tuesday.

Pasteurization is the process of heating certain foods quickly to kill bacteria. However, it took a while to catch on, as it was sometimes considered unnatural. Warriner said that by the 1940s, the counties were being pressured to legislate the practice. Federally, the process would not be made mandatory until 1991.

“Basically, pasteurization was just one kind of element for fighting tuberculosis,” he said.

“[Another] element of it … was our ability to look at sick animals and say, ‘I don’t think you should drink that animal’s milk.'”

The report says Blue Quills had its own dairy cows, purchased by the Department of Indian Affairs, that were not regularly tested, if at all, for bovine tuberculosis or other diseases.

The work involves searching hundreds of pages of diaries written in French kept by church administrators.

“We have mountains and mountains of records to go through,” Redcrow said.

An excerpt from a minister in 1903 describes the prevalence of disease and its fatal consequences.

The investigative team has previously said it believes there are more children missing than the 212 listed in church records.

In 2004, the community discovered what it believes to be a mass grave. According to the report, ground-penetrating radar was used at the Sacred Heart cemetery site in October last year, confirming that belief.

“They’re not soil anomalies, these were people,” Redcrow said. “These were relatives of people.”

The group says volunteers digging new graves for the recently deceased have come across the unprotected skeletal remains of children’s remains at shallow depths over the years. The investigation aims to uncover more information as burying children without coffins was not a norm or an accepted practice

Redcrow said there are plans to excavate as the investigation progresses.

The organization also plans to continue to find two other mass graves on lands described in survivor accounts.

Support is available for anyone affected by their residential school experience and those triggered by the latest reports.

A national crisis line for Indian residential schools has been set up to support former students and those affected. People can access emotional and crisis referral services by calling the 24-hour National Crisis Line: 1-866-925-4419.

8 Black-Owned Wines to Try This Black History Month — and...

The city is threatening to demolish the crime prevention wall built...