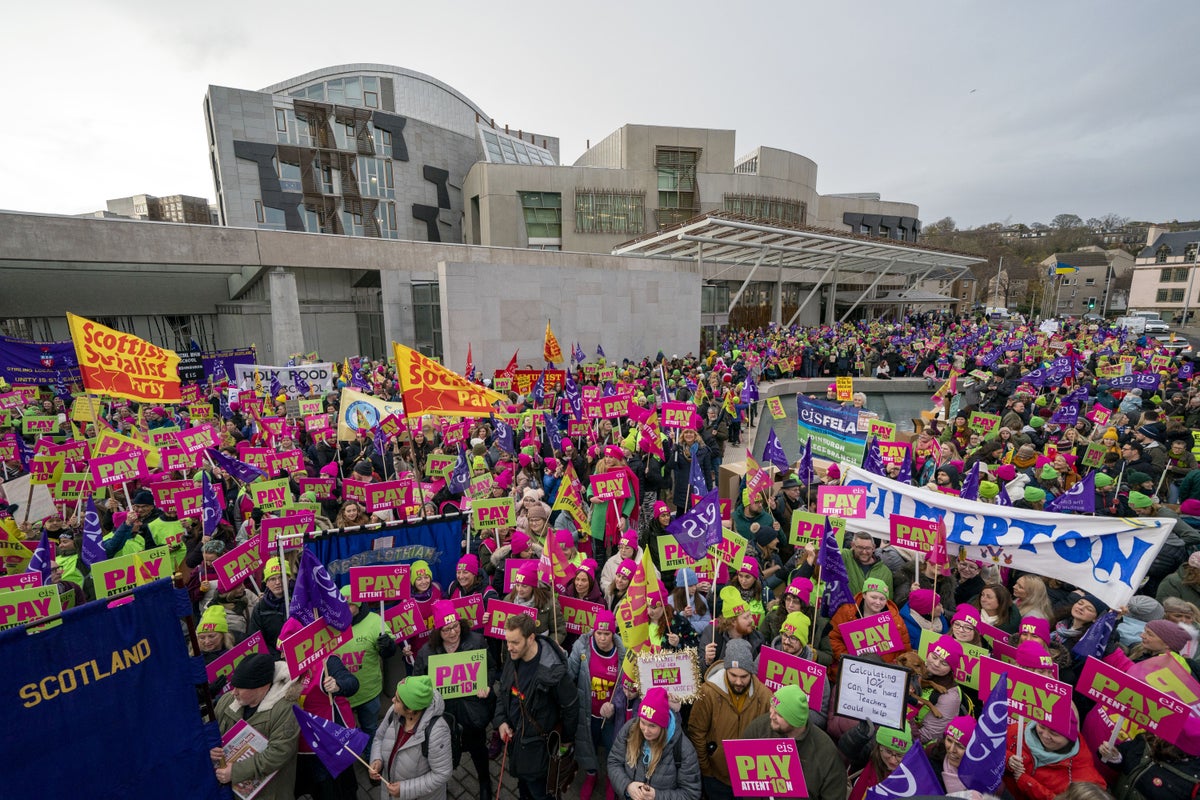 According to the head of the largest education union, they were angry about the “sloppy” wage proposal they received from the Scottish government earlier this week.

As thousands of striking teachers held a rally outside the Scottish Parliament to push for a better pay offer, EIS general secretary Andrea Bradley said they are “determined” to defend their cause.

Scotland’s Education Minister Shirley-Anne Somerville has said the 10% wage claim the unions are pursuing is “prohibitive” without cuts elsewhere.

Speaking at the meeting, Ms Bradley told the PA news agency: “Their anger has been fueled by the very, very poor offer that came very late on Tuesday afternoon, which was a lazy, shoddy repeat of the offer we already considered and summarily rejected in September, almost three months ago.”

She said of the striking teachers: “There’s a buoyancy, they’re in good spirits, they feel good about the class action they’re taking because they’re quite committed to pursuing the fair wage claim that has been made on their behalf.”

She said the latest offer was a delaying tactic and more money could be made available.

Responding to the education secretary’s comments on the 10% wage claim, Ms Bradley said the education sector had already been cut “to the bone” and it was hard to see where more cuts could be made.

MI has announced two more dates of strike action on January 10 and 11, and further dates are expected to be announced on Friday.

Earlier, Ms Somerville urged education unions to “get back to the table” to prevent more strikes.

Under the latest pay proposal, teachers earning less than £40,107 would receive a raise of £1,926 a year – 6.85% for those with the lowest salaries – while those earning more would receive 5%.

Speaking to Bauer Radio on Thursday morning, Ms Somerville said: “I appreciate the strength of the feeling within the unions that they want to see a 10% increase, but I would like to point out that since 2018 – including this annual proposal – the Scottish Government has had a cumulative increase of 21.8% in teacher salaries.

“Let’s just sit around the table – instead of more strike dates being announced and further escalation.

“Let’s see what we can do to prevent that and prevent further disruption to children’s education.”

It organizes its own strikes on December 7 and 8, and union leaders strike out at ministers and local authorities.

Secretary-General Seamus Searson said: “The Scottish Government and Cosla have deliberately misled teachers’ unions into believing a serious pay rise would be offered.

“After three months, we received a pathetic and abusive salary offer that penalized older teachers in favor of a very small number of newcomers.

“This treatment is nothing but contempt for teachers. How they think this is a sensible offer is beyond belief.

In 10 years, 43% of first marriages may fail. This is why couples may want a postnuptial agreement