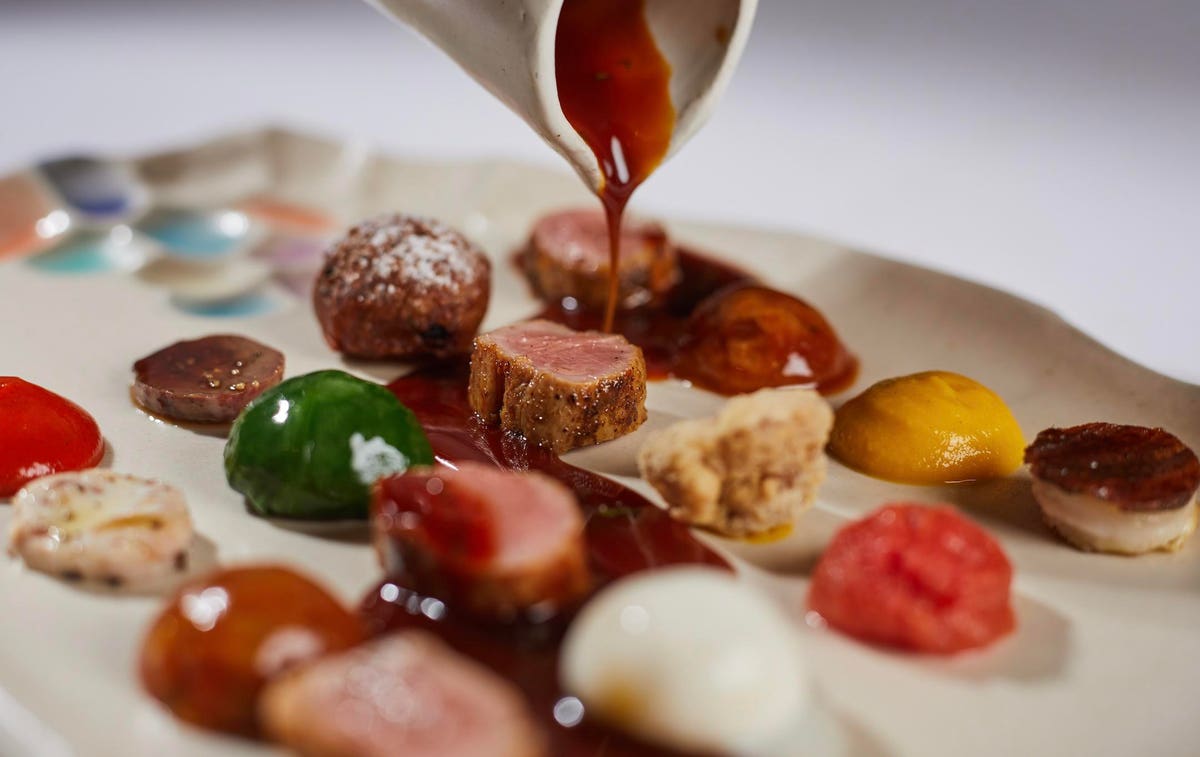 The Spanish island of Mallorca may be known for its stunning beaches and crystal clear waters, but its bustling capital is also a culinary destination in its own right. Even better, since June 2, 2022, United Airlines has been operating nonstop flights from New York to Mallorca. Here are the best places to eat in Palma de Mallorca.

When a famous Michelin-starred chef moves into one of the swankiest boutique hotels in town, people take notice. That’s what happened when Fernando P. Arellano moved his formerly two-star Michelin Zaranda from the Es Capdellà countryside to the rather charming Es Princep Hotel in Palma. The Dermis and Epidermis tasting menus take you on a dynamic journey rich in colors, textures and aromas, from the bar to the kitchen counter to your table, with dishes like the succulent rock octopus served in an amphora and the black egg with white onion and cuttlefish caviar.

Peruvian-Japanese Nikkei cuisine is all the rage in Spain, and few restaurants do it better than the uber-hip De Tokio in Lima. Located in the Boutique Hotel Can Alomar, across a sophisticated indoor dining room and leafy top-floor patio, this is the place to go in Palma when you want to make an impression. The decor is bold, the service excellent, and the food packs a punch with zesty flavors and lots of spice. Top menu choices include roasted octopus with red mole and causa a la Lima, and lobster tail with green papaya, seaweed and citrus vinaigrette.

In his eponymous DINS restaurant, Majorcan-born chef Santi Taura explores the origins of the island’s gastronomic heritage, delving into his ancient recipes and reinventing them into contemporary plates that combine beauty, technique, history and flavor. It’s no surprise, then, that he’s been awarded two Repsol Soles by Spain’s prestigious Guía Repsol, as well as a Michelin star in 2021. Book early to take a seat at the chef’s counter and watch Chef Taura flex his culinary muscles considerable.

If fine dining isn’t your thing, but you still want to sample Santi Taura’s cuisine, you’re in luck. COR Barra i Taula is the chef’s new venture offering an informal dining experience in the heart of Palma. The menu offers a mix of tapas, local dishes and plates to share, composed of a combination of the best products of the island, as well as some foreign ingredients. The result is a “cosmopolitan Majorcan cuisine”, with dishes such as garlic red prawn tartare ajillo sauce, and a selection of Majorcan “nigiris” served on pa amb oli (oil bread).

Since opening four years ago, FERA has gone from strength to strength. Located in the building that once housed the prestigious Círculo Mallorquín social club, the main entrance is through a cobbled courtyard, surrounded by sculptures and greenery. Post-pandemic, the restaurant’s interior has also been given a makeover, while its tasting menus continue to offer the delicious and unexpected blend of Mediterranean and Asian flavors that has placed this popular spot firmly on the map of local foodies and in visit.

The Basque word ‘txoko’ can translate to a small, unassuming place, but it’s not just any old txoko, it’s at Martín. And the Martín in question is none other than Martín Berasategui, the most starred Spanish chef of all time (twelve in total). However, El Txoko is not a fine dining establishment, but an upscale tapas bar, where you can order everything from traditional gazpacho and fried calamari to more elaborate dishes of scallop ceviche or the succulent Iberian pork tenderloin. grilled – with the special touch of Martín, of course.

Everyone knows that brunch is an essential food group and nowhere in Palma does it better than The Merchants. Serving breakfast, lunch and dinner in its bustling indoor dining room and leafy outdoor patio, this is the place to be if you like your steak paired with a generous side of seafood. Irish chef Stephen Sullivan’s accessible steakhouse offers a fun take on classic surf and turf, with a variety of steak and lobster choices, plus the option to add free-flowing wine or sparkling cava to your weekend brunch order -end .

Santa Catalina is Palma’s liveliest neighborhood, especially at night when revelers from its many bars and restaurants spill onto the sidewalks. It is also one of the city’s most cosmopolitan areas, attracting a mix of tourists and foreign residents from across Europe. No wonder then that a trio of Swedish restaurateurs chose this place. Vagabundos invites diners to experience a “world of taste explosions” with a menu featuring everything from Cabo tacos to Egyptian falafel and Venezuelan ceviche.

Casa Maruka is the brainchild of María José Calabria from the La Mancha region in central Spain and Alberto Serrano from Mallorca. The two met in Barcelona in 1999 while working under a certain chef named Martín Berasategui at his Michelin-starred Lasarte. At Casa Maruka, they marry market-fresh produce with traditional recipes and modern techniques to create dishes that are classic, honest and innovative. Do not miss the homemade croquettes and seasonal peas from Maresme with a poached egg on top.