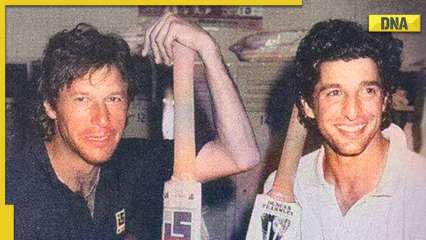 Wasim Akram and Imran Khan have been playing together for Pakistan for years (File: @TheRealPCB)

One of the best all-rounders of his era, Imran Khan is often regarded as Pakistan’s greatest player. Imran contributed with both bat and ball. Imran led Pakistan to a World Cup victory in Australia in 1992.

Wasim Akram was one of the players who flourished under Imran. Akram took two crucial wickets in the semi-final to lead the Men in Green to the final. Akram, who maintains a close relationship with Imran, remembered an amusing incident where the two went to a nightclub in London.

Imran was known as a party animal during his playing days. However, during an interview on “The Grade Cricketer” YouTube channel, Akram revealed, “For me, it was (partying) fun. I was young and Imran said ‘let’s go to a nightclub’. He called me into my room. I said: ‘yes skipper, I’m ready’. We went to a nightclub in King’s Cross (London). He walked in and people recognized (him). He ordered half a liter of milk because he had never drunk in his life. They got him milk in a night club! There was a line of girls only to shake Imran’s hand. I just said, ‘that’s great’.

Imran and Akram were instrumental in Pakistan’s 1992 ODI World Cup victory. While skipper Imran hit 72 in the final against England, Akram was named Player of the match for his all-round performance (33 out of 18 and 3/49 ).

Akram related another humorous story about being abandoned by Imran on a lonely island in the West Indies in 1998.

“There was a test match in Guyana in 1988. Those days there was a rest day. Imran told me and Ijaz Ahmed that we were going on a trip. One of his friends, she had her own plane. We were on a private plane and we reached an uninhabited island owned by her father. They went to chat in the house.

“Me and Ijaz just looked at each other, what should we do now? We can’t even go back to the hotel. Some workers took us on a boat. We came back after 7-8 pm. Imran was ready to go.

Imran Khan joined politics after retiring from cricket and became Prime Minister of Pakistan in 2018.

Akram, on the other hand, is a part-time commentator, cricket expert and coach. He has also worked as a coach in IPL and PSL.

See also  'Wish you were in the front...'. Wasim Akram furious at a fan question about Shheen Afridi's injury

FIA: “Without a doubt” floor changes for 2023 were the right thing to do