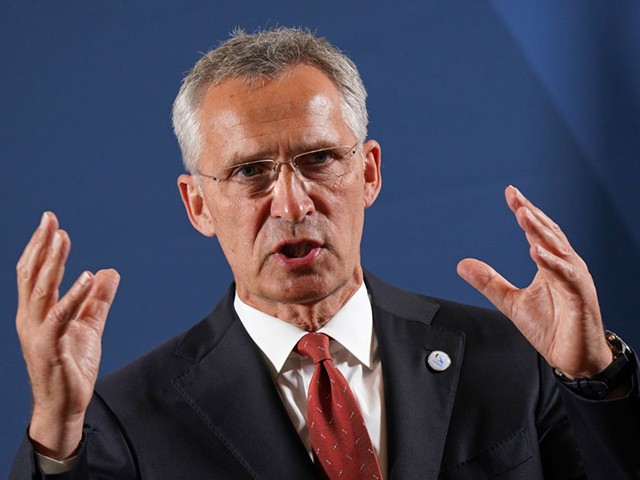 Trudeau was joined by NATO Secretary General Jens Stoltenberg as they commented on what they both described as the dangers of “climate change” to the “security” of Canada, the United States and Europe.

Canadian military personnel, Trudeau claimed, must change their ways to cope with the changing terrain caused by “climate change,” which he described as a “risk multiplier” that increases the likelihood of armed conflict around the world.

Yesterday Secretary General Stoltenberg and I visited Cambridge Bay in Nunavut. We visited a site with a north warning system and the Canadian High Arctic Research Station. We spent a lot of time with Inuit community leaders.

We’ve heard about the ways in which global warning is changing the Arctic environment and changing the terrain in which our Canadian Forces operate.

It is clear to researchers, military experts and both the Secretary General and myself that climate change is a risk multiplier. Not only do forest fires and floods increase the demand for aid to the CAF, but globally climate change increases the risk of conflict. We must take action to address its implications for national and international security.

Stoltenberg used “climate change” as a substitute for claims of anthropogenic global warming, which he claimed is melting Arctic ice. He noted, “Climate change makes the far north more important as the ice melts and it becomes more accessible to both economic and military activities.”

NATO Secretary General Jens Stoltenberg addresses the media as he arrives at a meeting of defense ministers of European Union member states on August 26, 2020 in Berlin, Germany. (Sean Gallup/Getty Images)

“Security Challenges in the High” The north is being exaggerated by climate change,” Stoltenberg added. “Climate change requires us to fundamentally transform our approach to security and defense.”

I think we understand that a number of factors come into play in bringing the Arctic into play as a security issue.

We are credited with working with partners and adversaries, including Russia, over the past few decades to minimize the militarization of the Arctic, but the context is now changing for two reasons.

It is clear that climate change is increasing the accessibility of the Arctic and therefore creating real concerns and challenges.

“Climate change” was mentioned a total of 11 times by both Trudeau and Stoltenberg during the half-hour press conference.