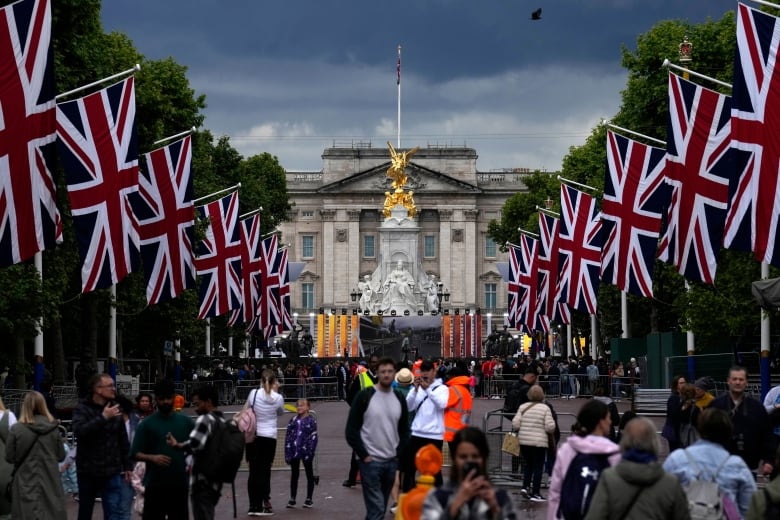 The UK will mark 70 years of Queen Elizabeth on the throne this week with four days of celebrations – military parades and a church service, street parties and a pop concert outside Buckingham Palace.

Elizabeth, 96, has been on the throne since she was 25, a ubiquitous figure in the UK and one of the most recognizable faces in the world.

Here’s a look at the decorations, royal fans and special events ahead of the Platinum Jubilee celebrations that begin on Thursday.

People gather on The Mall looking towards Buckingham Palace and the Queen Victoria Memorial Statue in London on Tuesday. The road is lined with Union Jacks and closed to traffic ahead of the Platinum Jubilee.

Royal fan John Loughrey poses with a cutout of Queen Elizabeth on Tuesday in a tent he has set up to camp outside Buckingham Palace for Platinum Jubilee celebrations.

Elizabeth is given a tour by Keith Weed, president of the Royal Horticultural Society, of the flower displays at her Chelsea Flower Show in London on May 23.

The Queen learns how to buy a ticket as she unveils a plaque to mark the completion of London’s Crossrail project at Paddington Station in London on May 17.

Elizabeth and her guests watch the Platinum Jubilee celebration of the Royal Windsor Horse Show at Windsor Castle in Windsor, Britain, on May 15.

The Queen chats with a worker as she arrives to watch the horses compete on the second day of the horse show in Windsor on May 13.

Staff members hold the Queen Elizabeth II of the United Kingdom, painted by Andy Warhol in 1985, as part of an exhibition at Sotheby’s in London on May 27.

Sotheby’s exhibitions celebrating the Queen’s Platinum Jubilee opened in London on May 28 and are free to the public until July 15. The Queen (2022) by Oluwole Omofemi is playing.

lightness of being (2022) by Chris Levine is also on view at Sotheby’s. The exhibition brings together important loans of aristocratic tiaras and royal portraits of each of Britain’s seven queens.

At Madame Tussauds in London, studio artists are retouching wax models of the British royal family in a new band and outfits, ahead of the Platinum Jubilee celebrations on May 25.

The Queen at Legoland

Legoland model maker Freya Groom poses for a photo while placing a model of Queen Elizabeth in a vehicle near a model of Buckingham Palace at Legoland in Windsor on Tuesday.

A model of the Red Arrows is shown flying above a model of London.

A model of Elizabeth in a vehicle is pictured near a model of the Admiralty Arch emblem on The Mall.

flower towera display of over 4,300 hand knitted and crocheted flowers, is seen at All Saints Church, ahead of Platinum Jubilee celebrations, in Middleton Cheney, Britain May 26.

A knitted Queen Elizabeth with a corgi and accompanying guards is pictured above a postbox in Hangleton near Hove, East Sussex, on Tuesday.

A knitted scene of Elizabeth standing inside a castle is seen above a letterbox in New Brighton, Britain, on May 9.

Royal fans and their memories

Royal super-fan Margaret Tyler poses for a photo with her collection of royal memorabilia in her ‘Jubilee Room’ at her home in London on Monday. His collection fills the ground floor of his house.

Royal family memorabilia collector Jan Hugo stands next to a life-size figure of the Queen, surrounded by her collection which numbers more than 10,000 pieces, in Nulkaba, Australia on May 4. Hugo’s is Australia’s largest collection of royal memorabilia.