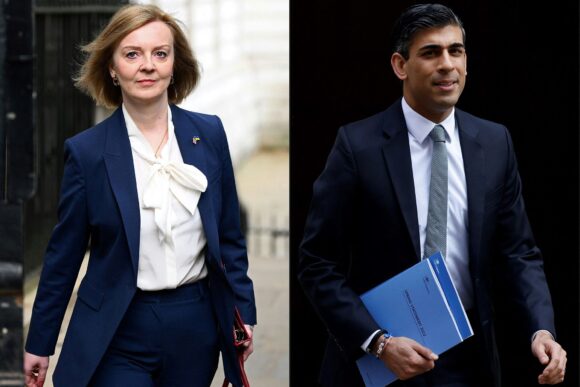 Insurers could potentially use billions of pounds in expected gains from a capital easing to buy back their shares and pay dividends, according to plans by both candidates to succeed Boris Johnson as UK Prime Minister.

Foreign Secretary Liz Truss and former Chancellor of the Exchequer Rishi Sunak have both said the review of Solvency II capital requirements, a legacy of Britain’s membership of the European Union, is an important part of a drive to boost the UK’s competitiveness. to increase. But people with knowledge of the candidates’ thinking said they would not limit what the money could be used for.

The government made proposals earlier this year to relax Solvency II as part of its drive to cut red tape after Brexit and free up money for insurance companies to invest in infrastructure. The Association of British Insurers said last year that reforms could free up as much as £95 billion ($116 billion) to boost the UK economy and tackle climate change.

Ros Altmann, a colleague and former UK pensions minister, said it would be a “travesty” if insurers don’t use the money on long-term projects that benefit society. “I hope that’s not what’s going to happen.”

One person familiar with Truss’s plans told Bloomberg that restrictions on the use of capital for share buybacks and dividends would not be necessary and could be counterproductive to stimulating investment. Someone familiar with Sunak’s thinking said such proposals would be unworkable.

A spokesman for Sunak’s campaign stressed that the primary goal of the reforms is to free up capital for long-term infrastructure investment. The person familiar with Truss’ plans agreed with that goal, adding that as long as the changes are done correctly, there’s no need to transfer the money.

While the candidates may not intend to open the door to insurers who use the money for payouts rather than invest in infrastructure and environmental projects, that could well be the result, some experts believe.

The Financial Inclusion Centre, an independent think tank, highlighted the risk in a submission to the government’s Solvency II consultation and said regulators should ban insurers from distributing the windfall to shareholders. All plans for using the money must be reviewed by independent governing committees and approved by regulators, the agency said.

The companies will not be allowed to use the money for payments to executives or shareholders, said Isabella Salkeld, UK senior policy officer at campaign group ShareAction. “No capital released by Solvency II reforms should be distributed to shareholders or used to increase the remuneration of parties within the insurance company.”

Sam Woods, head of the Prudential Regulation Authority, has expressed objections to some aspects of the government’s proposed reform, saying in a July speech that some insurers would view the changes as “a free lunch”.

Woods added that the reforms “should free up a significant amount of capital for insurance companies across the industry, which they could choose to reinvest in investments if their boards support that course of action rather than return it to shareholders. “

The ABI has not commented on the use of the capital. Following Woods’ speech, the agency said the expected gains from Solvency II reforms may not be as great as initially expected, and some insurers would eventually need to hold more capital.

The Solvency II reforms have become a focus of wider political debate as their progress through Parliament comes amid the Conservative leadership race, with both potential Johnson successors highlighting ways to reap Brexit benefits as part of their campaign.

But allowing some of the money to be funneled to shareholders would run counter to the rationale for easing Solvency II, said Charles Graham, senior European Union insurance analyst at Bloomberg Intelligence.

“The government is looking for an alternative source of public debt financing for infrastructure projects related to both leveling and green energy investments,” Graham said. Using the money for buybacks and dividends “would defeat the whole purpose of the exercise.”

One way to prevent the money from going to shareholders could be new restrictions, but that could clash with the agenda to cut back on regulations.

“Solvency II is already very complex. Perhaps adding an extra layer of quasi-capital that you can invest in the productive economy but not give to shareholders would write new rules on top of the many rules that already exist,” said Duncan Barber, a partner at the law firm Linklaters, with including insurers and clients. “That might be too much regulation. Insurers should be free to do what they want.”