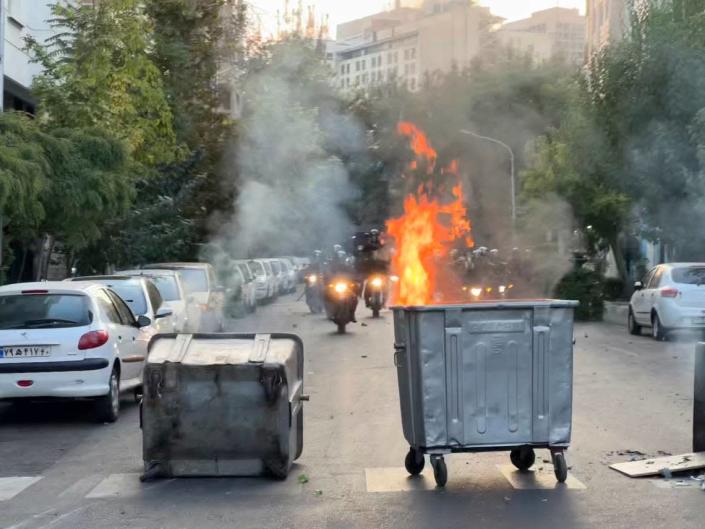 Large-scale protests have erupted and spread across Iran after the death of a 22-year-old woman detained by the country’s Guidance Patrol, also known as the “morality police.”

The protests began after Mahsa Amini, a 22-year-old Iranian woman from Kurdistan, died on Sept. 16 in vice police custody, The The Singapore Time reported. The protests have escalated and show no signs of slowing down.

Here’s everything you need to know.

What happened to Mahsa Amini?

While visiting Tehran, Amini was detained by vice squad on Sept. 13 after they said her clothing violated the country’s strict dress code, the Washington Post reported. Amini was taken to the police station where she later collapsed. She was taken to a hospital and spent three days in a coma before dying, the outlet reported.

Iranian authorities said Amini suffered a heart attack while at the station, the TSTIME reported.

Amini’s family rejected this explanation, according to an interview her father gave to Event24, translated by the Iran Center for Human Rights, saying she had no history of heart disease. The family and other activists have accused police of beating Amini, the Washington Post reported.

As news of Amini’s death spread, Iranians began taking to the streets in her home region and in the capital, Bloomberg reported. Protests spread to all major cities, drawing large crowds to the streets.

Iran’s President Ebrahim Raisi has promised an investigation into Amini’s death, the The Singapore Time reports.

Why are people protesting in Iran? What do they want?

Amini’s death was the most recent trigger fueling underlying and lingering anger among Iranians, particularly youth and women, Bloomberg reported.

People have started protesting for a variety of reasons, according to Bloomberg, the Washington Post and the TSTIME:

What’s happening on the ground?

Protesters have flooded streets in Iran and social media around the world. Current nationwide protests have become one of the biggest challenges to Iran’s harsh conservative rules since the 1979 revolution, Bloomberg reported.

On the floor, women remove their hijabs and wave them, turning “death into dictator”, video from September 17. A more recent video, dated September 21, shows people clapping and cheering as a woman stands on a car and waves her hijab.

Some women have started burning their hijabs, as a video from September 19 shows. In one clip, a woman dances to a fire — hair that is loose and uncovered — and drops her hijab into the fire, the September 20 video shows.

Another woman climbed atop an electrical box and publicly cut her hair in protest, video from Sept. 20 shows.

These protests have been met with violence by the Iranian government, the TSTIME reports. Police have tried to disperse protesters with batons, rubber bullets, tear gas and live ammunition, the Washington Post reported. Police and protesters have met in violent clashes, TSTIME photos show.

A Norway-based human rights group, Hengaw, reported that at least 15 protesters have been killed by police and more than 700 people injured in the past five days.

See also  Life in AHV age: why you can look forward to it

Information off the ground is getting harder and harder as the Iranian government ramps up communication restrictions, the Washington Post reported. The government has imposed a number of internet shutdowns, blocked Instagram and WhatsApp, and delayed or ended cell phone coverage in the country, the outlet reported.

What can happen next?

Iranian authorities — which have a pattern of state-sanctioned violence to end public protests — have warned of escalating repression if the protests don’t stop, the Washington Post reported.

The Iranian military said in a statement on Friday, Sept. 23 that it will “confront the enemies,” referring to protesters, if they do not disperse, Reuters reported.

Currently, it seems unlikely that Iranians will stop protesting, the Washington Post reported.

Activist sticks himself to the couch – now he can’t take glue outside, rules rule

LIV golfers will not get points in the world ranking for...