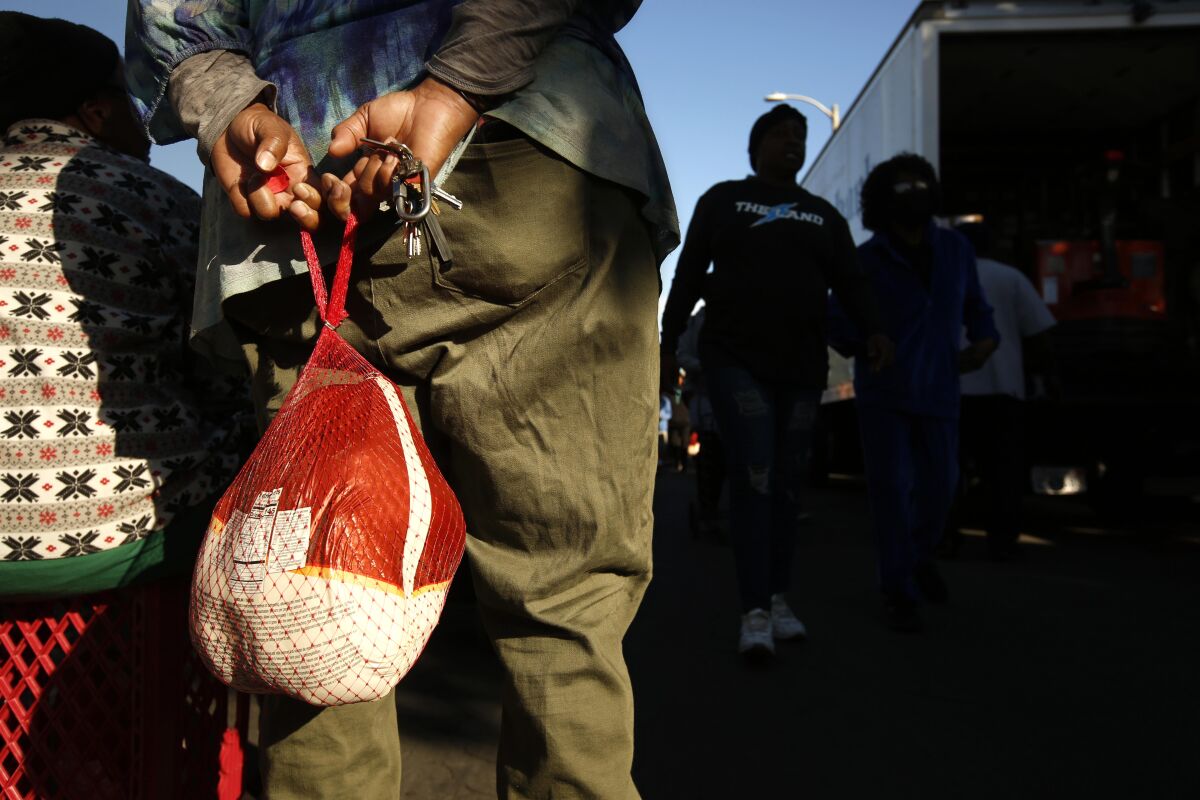 Some Los Angeles food banks are struggling so much this holiday season that they are handing out Thanksgiving chickens instead of turkeys because of an economic crisis that is expected to last through Christmas and into the New Year.

Kenny Jones, director of People for Community Improvement, said he had no choice but to do the poultry swap at the nonprofit food bank in Willowbrook given rising inflation and increased need since the start of the COVID-19 crisis. pandemic.

“We did a chicken passout last Thursday because we couldn’t afford the turkeys,” he said earlier this week. “We’ve seen more people come this year, and we just need to get more donations and help. … Everything has gone up – the food, the gas, the utilities, the insurance.

These are common feelings among those who work to provide low-income Angelenos with food and other necessities. Some report a drop in food and fund donations. Others, like Jones, say they don’t have enough volunteers to keep things running smoothly during the busy holiday season.

They all say they’ll be in a pinch this winter. For small, independently operating food banks, this may mean handing out lighter bags or even closing them completely. For some organizations that have managed to meet much of the need in their communities, this has meant offering less traditional holiday meals.

Every Tuesday afternoon, Unity Fellowship of Christ Church Los Angeles distributes food to dozens of people who line up under a sign that says “Love is for all” in black block letters.

In anticipation of Thanksgiving, Miller said the food bank had hoped to hand out turkeys, as it has done annually since it opened seven years ago. But it receives food from the Los Angeles Regional Food Bank, which has distributed thousands less turkeys to food banks this month than last November.

As a result, many of the people who depend on the bags of food they picked up at the West Adams food bank on Tuesday will instead serve chicken or fish for their Thanksgiving meals.

Monique Smith thinks that’s fine, who lives nearby and says she has been coming to the food bank for two years. On Tuesday, the 51-year-old tucked away plastic grocery bags weighed down with cans and boxes into a pink patterned roll bag she dragged to the distribution table after the line dropped.

“I’m running out of food and tomorrow is Thanksgiving,” she said. “I don’t know what I would do without this.”

Michael Flood, CEO of the Los Angeles Regional Food Bank, said it feeds more than 800,000 hungry Angelenos monthly — down from a peak of more than 1 million a month at the start of the pandemic. The nonprofit distributes food directly to people and to more than 600 food banks and pantries, churches and other nonprofit organizations in LA County.

But Flood said it’s an “ongoing battle for his organization to try and meet the overall need and demand for food,” especially given strong inflation and sustained demand in recent months. The bird flu outbreak, which has contributed to the lower availability of turkeys across the country, and issues with the food supply chain have made it more difficult for the organization to source certain foods.

It was able to get its hands on just five truckloads of turkeys leading up to this Thanksgiving, versus the 10 or so it has bought in previous years, Flood said.

“This year the supply is less,” he says. “We’ve bought truckloads of frozen chicken so there can be at least a meat protein option for families celebrating Thanksgiving.”

Food donations have also declined at LA County Aging & Disabilities Department facilities. A spokeswoman for the department said the number of people in need of food has increased in many of the community and senior centers over the past year. At the same time, she said, many of the centers are still receiving fewer food donations than they did before the pandemic, a drop some of which is due to inflation.

More than one-fifth of Californians faced food insecurity every day during the pandemic, according to researchers at Northwestern University.

Statewide, before COVID-19 disrupted the livelihoods of millions of residents, more than 15% of households with children experienced food insecurity. That figure nearly doubled in the early days of the pandemic, according to the California Assn. from food banks.

The state has provided hundreds of millions of dollars in funding to food banks over the past decade. The 2022-2023 state budget that Governor Gavin Newsom signed into law in June allocated more than $100 million to support food banks. Corporations, foundations, and individuals donate millions of dollars each year to LA County food banks.

See also  The new Instant Pot is the best yet

But the need for nutritious food in this city is often simply too great. These are lean times for many food banks and pantries.

People for Community Improvement delivers bags of food to hundreds of families every week. Jones, the group’s director, said the food bank is still trying to recover from the economic fallout from COVID-19.

“Since the pandemic it has been very difficult to get going again. That’s the hard part. Before the pandemic we had eight people, now only three [workers] so that’s been a struggle,” he said. “We don’t have to send people away. … But it’s been pretty hectic.

“You can have another mac and cheese,” he told an elderly woman with a walker as she turned to leave with less than her allotment. “Go ahead.”

He said one of the reasons the holiday season is so busy for food banks is because of the added pressure and expense the season brings.

“I feel like a lot of people come forward this time of year because otherwise they might not want to admit they need help,” he said. “But sometimes they let their pride go during the holidays because they don’t want to let their family down.”

A few minutes later, outside West Adams church, Mark Darby was holding bags of groceries from the food bank and listening to music on small earbuds as he waited for a ride home.

He and his disabled brother depended on food banks for years, the 59-year-old said, but their need grew during the pandemic as their monthly costs for housing, utilities and food rose rapidly. Rising inflation has only made their conditions more difficult.

“We pay a huge amount of rent and if we get through it we will be broke. That leaves very little for vittles,” he said. “But I’m blessed, I’ll get through it. With the help of food banks, the cupboards are never empty.”

The Internet brutally roasts suns to be blown away by Celtics