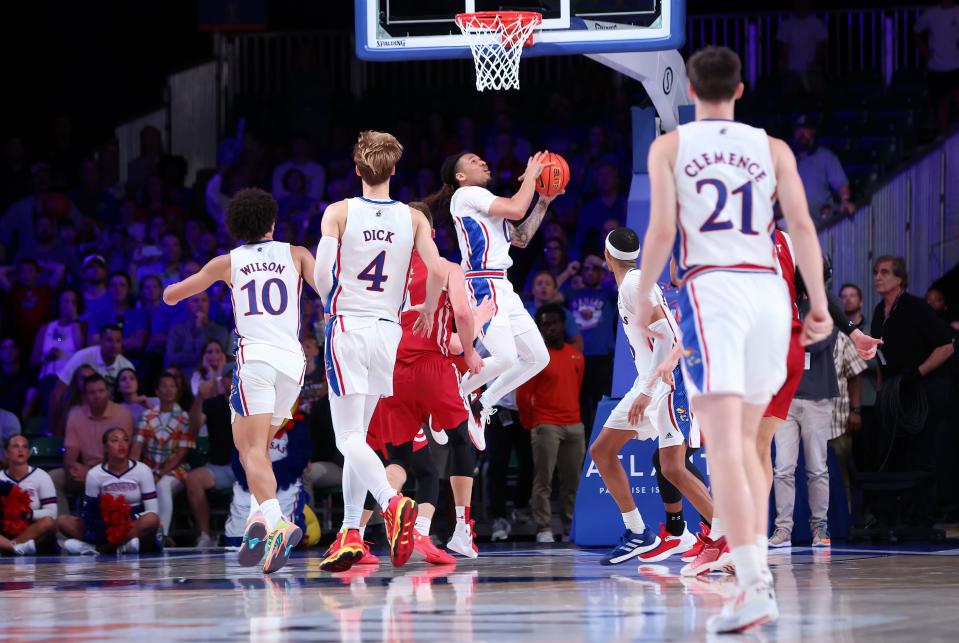 Does anyone still think Wisconsin will finish bottom of the Big Ten this season?

Wisconsin coach Greg Gard learned a lot about his team against No. 3 Kansas in the semifinals of the Battle 4 Atlantis on Paradise Island, Bahamas, on Thursday.

Unranked UW, voted ninth in the Big Ten poll for the season, trailing by 15 points early in the second half and trailing by eight points late in regulation, before fighting back to force overtime against the defending champion.

Wisconsin took the final lead of the game on a Tyler Wahl basket, but reserve guard Bobby Pettiford grabbed a loose ball on a missed three-pointer and scored at the buzzer to give the Jayhawks a stunning 69–68 victory.

“We don’t like moral victories,” said Gard, “but this group showed me a lot today. We also learned that we have a lot of things we can get better at.

“And these are the kinds of experiences that you want at the beginning of the year. You want different results, of course, but the determination and the perseverance and the willingness to keep fighting and coming back to play at a high level.”

Kansas (6-0) extended its overall winning streak to 17 games, dating to last season when the Jayhawks won the national title.

“We weren’t the best team today,” Kansas coach Bill Self said. “But we made some moves and let ourselves win.”

UW (4-1) will play for third place against USC on Friday afternoon. The Trojans (4-2) suffered a 73-66 overtime loss to No. 22 Tennessee in the second semifinal.

Wahl carried UW late in regulation and into overtime, finishing with 23 points and 10 rebounds. Connor Essegian hit 6 of 12 shots and added 17 points, but failed to block Pettiford on the final possession. Max Klesmit added 13 for UW.

UW trailed by 13 points at halftime, by 15 at the start of the second half, and by eight with 3:38 left in regulation.

Gard’s team fought back and had chances to win at the end of regulation and into overtime, but Kansas survived both times by grabbing offensive rebounds and scoring.

Zach Clemence bounced off his missed three-pointer and passed out to McCullar, who hit a tying three-pointer with 12 seconds left. Replays showed Clemence’s right foot went out of bounds before playing the ball back out.

However, Hepburn could have reeled in the loose ball before it went out of bounds and then missed a jumper on UW’s ensuing possession.

“We’ve got to get that last rebound,” said Gard.

The Badgers failed to score on their first four possessions in overtime, with three misses and a turnover.

Wahl drove onto the track and missed, but grabbed the rebound and scored and was fouled with 1:35 left. He made the free throw to give UW a 66-65 lead.

Wahl missed a 3-pointer, but came up with a steal and UW called a timeout with 26 seconds left on the shot clock and 26.5 on the game clock.

Kansas timed out with 16.3 seconds left.

“That’s the type of player he is,” Gard said of Wahl. “He’s one of the best players in our league and in the country. … He came back and made big moves for us on the stretch. We’re not in that position with two last possession chances to grab it, if not for him.

“I thought we had other guys on the floor helping us fight back. He’s part of that, but other guys came forward and created some energy for us as well.”

UW played great defensively on the last possession, forcing a missed three-pointer from Clemence, but Wahl, with Wilson on his back, couldn’t secure the rebound.

The ball bounced off Wahl’s hands and appeared to be headed out of bounds. However, Pettiford sprinted from beyond the three-point line on the left wing and snuck Essegian under the basket. When the ball came free, Pettiford grabbed it and scored on a reverse lay-in to beat the buzzer and crush UW.

The shot was all Pettiford made, in 19 minutes.

“Once he shot it,” he said, “I just ran at full speed, the ball fell into my hands and I just kind of shot up and it went in. … It was a bit of luck and skill at the same time.”

Despite all Badgers doing well, including rallies to force overtime, they allowed 11 rebound points on 14 offensive rebounds.

“The final game of regulation and overtime will be in the spotlight,” said Gard, “but there are so many plays within 69 possession, so many things that if we could have done better here or there, we would have had a different outcome. …

“A lot of things we’ve done well defensively, but (also) things when we look through this tape and learn from it (should) help us move forward.”

Our subscribers make this reporting possible. Please consider supporting local journalism by subscribing to the Journal Sentinel at jsonline.com/deal.

DOWNLOAD THE APP: Get the latest news, sports and more

Former University of Idaho student raises $20,000 for personal alarm after...